From this month, Argentinian airlines will inaugurate six new routes in order to promote tourism and guarantee the connectivity of locals and foreigners during the winter holidays.

the transport company reported that from today the first flights from São Paulo will arrive, since the Government also seeks to promote connections with Brazil, a strategy in which the work of Argentinian airlines. 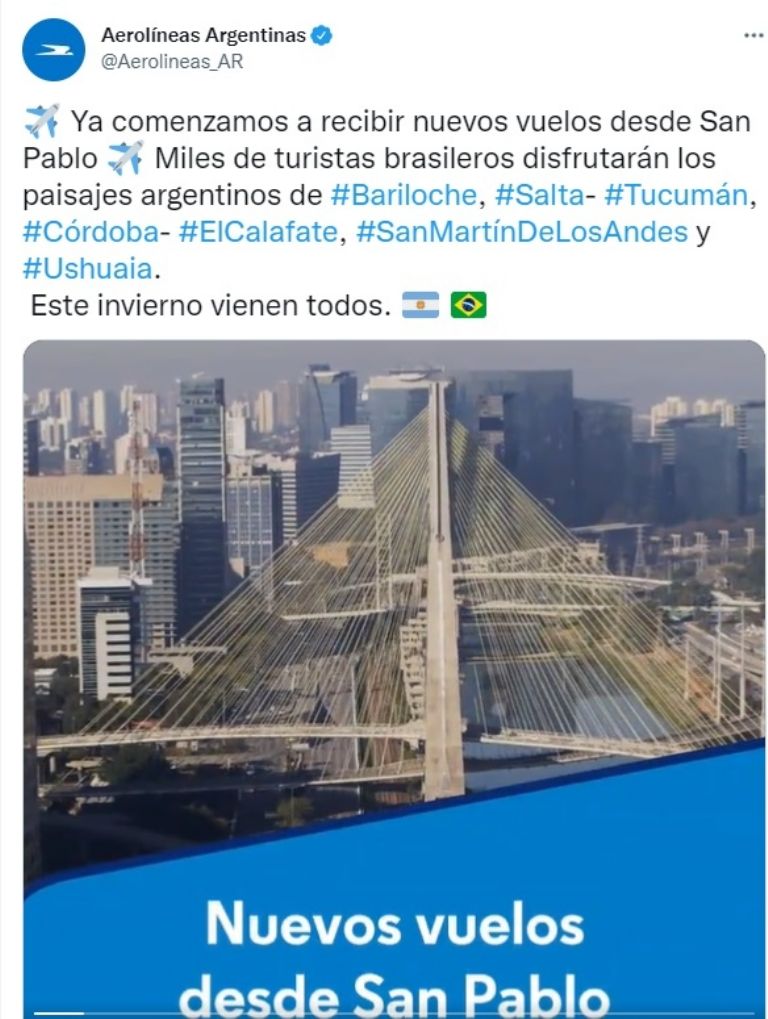 In this regard, the president of the company, Pablo Ceriani, pointed out that “today is a very important day for Argentinian airlines because With this flight between San Pablo, Salta and Tucumán we are starting an operation that is unprecedented in Argentina”.

And he added: “It means being able to connect the Brazilian market directly with the most important tourist enclaves in the country. We are more than sure that the winter season is going to be a success”.

Additionally, frequencies will be increased in destinations such as Salta, Tucumán, Ushuaia, Jujuy, Mendoza, Calafate, Córdoba, Bariloche, Bahía Blanca, Rosario, among other parts of the country.

What other connections will the airline enable?

The airline highlights that it recovered the “Atlantic Corridor”, which will link the cities of Buenos Aires with Mar del Plata, Bahía Blanca, Trelew, Comodoro Rivadavia and Río Gallegosin both ways.

Also, starting this week the company will have a daily flight between Buenos Aires and Bogotá, Colombia, which will also strengthen the market with that country.

From this month, Argentinian airlines will inaugurate six new routes

The National Congress overturned this Tuesday (5) the presidential vetoes

MasterChef: Carlos Báez is the favorite to win the competition

For this challenge, famous people did not cook at the

From July 13 to 18, the eleventh edition of the

According to the judges of the Court, the objective of state control is to prevent the

The Government announced an expansion of financing for the poultry sector

Photo: @danielscioli (Twitter) The Minister of Productive Development, Daniel Scioli, and his counterpart for Agriculture, Livestock

Photo: Daniel Dabove The Oral Federal Criminal Court No. 1 of San Martín will announce this

Bhavi had a meeting with his fans at Abasto, where he did an exclusive pre-listening of

After the changes in the economic team, Alberto Fernández resumes his local agenda