This Sunday, September 25, at 8 pm, the election debate among the eight candidates for mayor of Metropolitan Lima, organized by the National Election Jury (JNE). the contest It will be held in the Ella Dumbar auditorium of the Universidad Nacional Mayor de San Marcos.

Where to see the municipal debate?

The municipal debate It will be broadcast on TV Peru (channel 7). This will be replicated by signals from Latina (channel 2), América TV (channel 4), Panamericana Televisión (channel 5) and ATV (channel 9). Follow the special LR+ broadcast here live.

Municipal debate 2022 LIVE: proposals and statements of the candidates for Lima

Despite the fact that the municipality of Metropolitan Lima has shared powers and is, according to law, almost a strategic entity, the candidate who invoked the death of President Pedro Castillo, Rafael López Aliaga, assures that in the first days of his hypothetical mandate he will request powers in education and health to make ordinances. 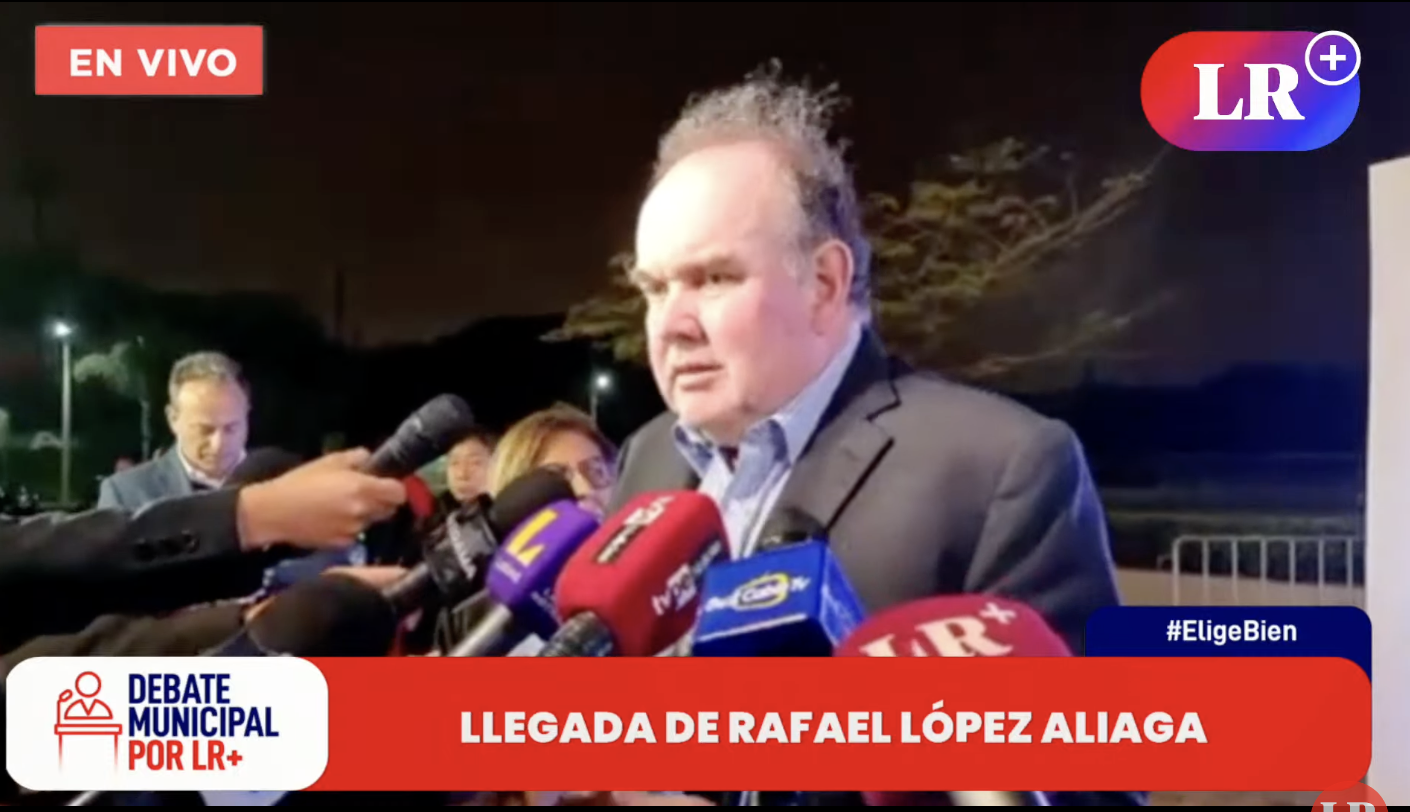 Candidate Elizabeth León enters the UNMSM with the head of the Esperanza Front, Fernando Olivera

The candidate for the commune of Metropolitan Lima Elizabeth León arrived at the Universidad Nacional Mayor de San Marcos in the company of the leader of her party, Fernando Olivera. 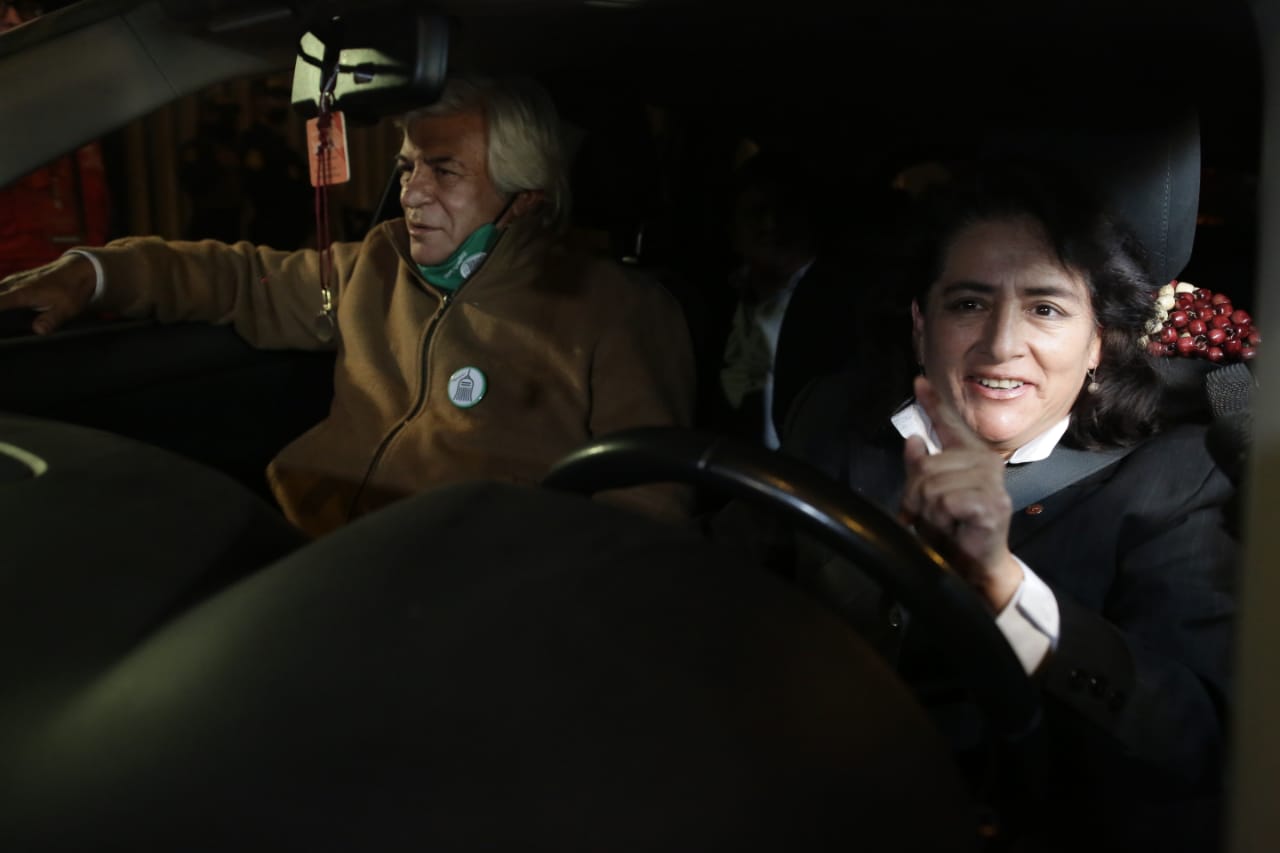 Groups related to the political parties that managed to register for the upcoming electoral process —and who will participate in today’s televised exchange— gather at gate 7 of the UNMSM to wait for the candidates for mayor of Metropolitan Lima that they support. 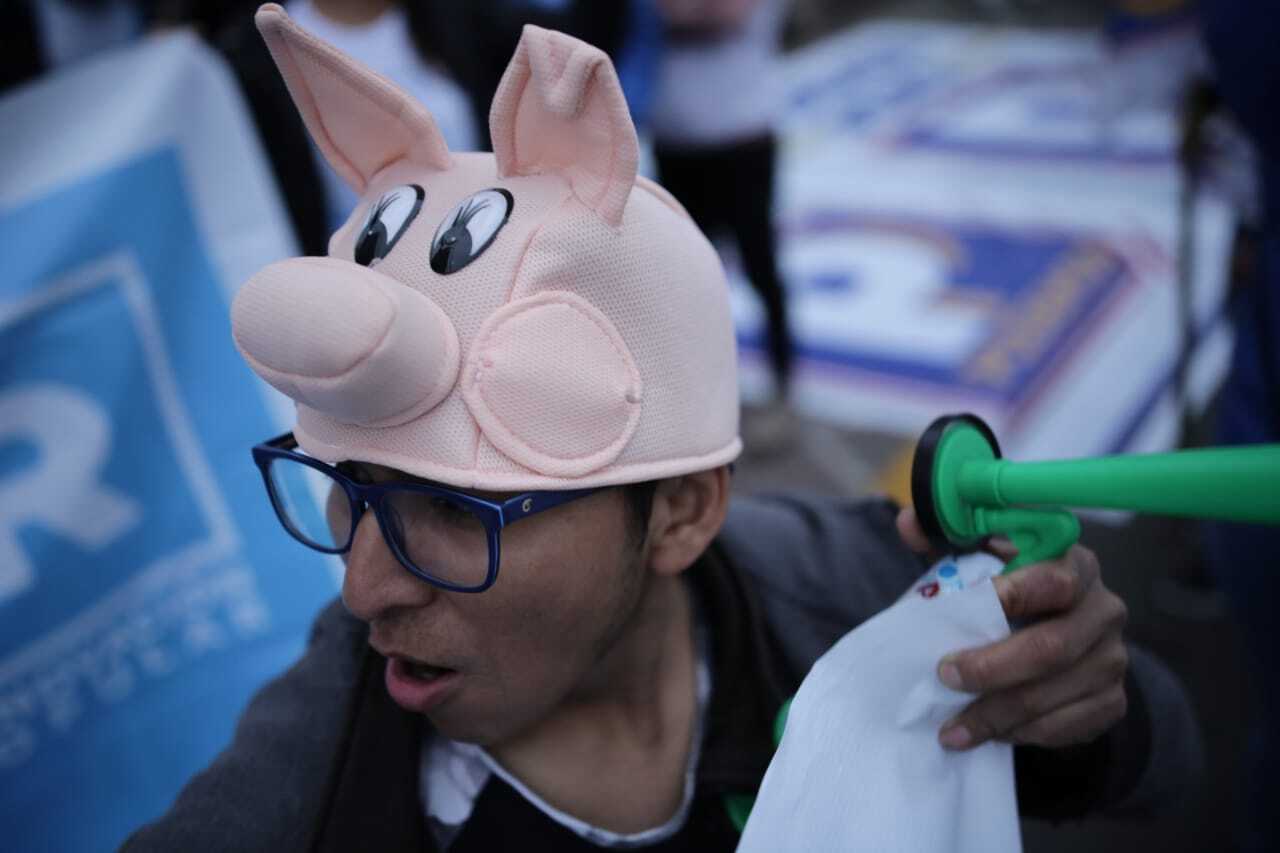 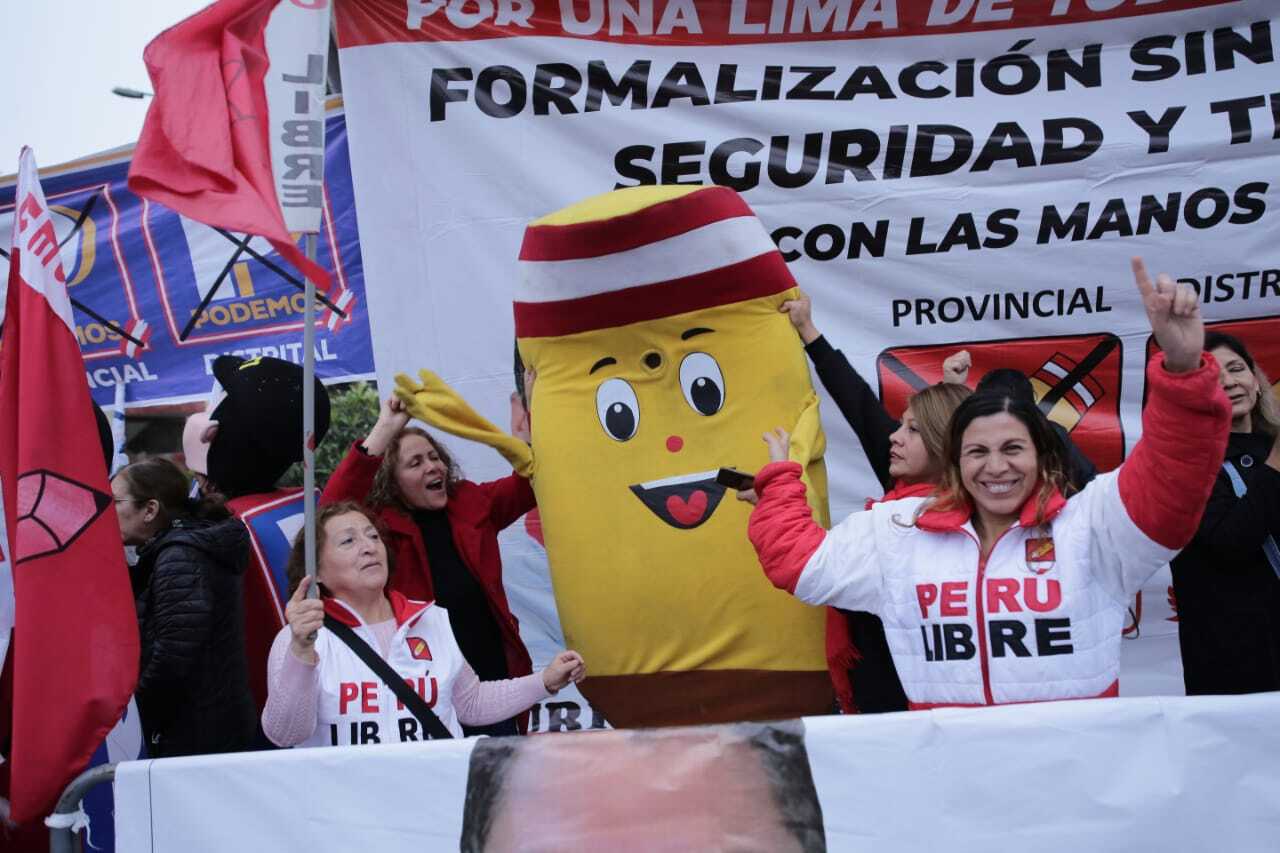 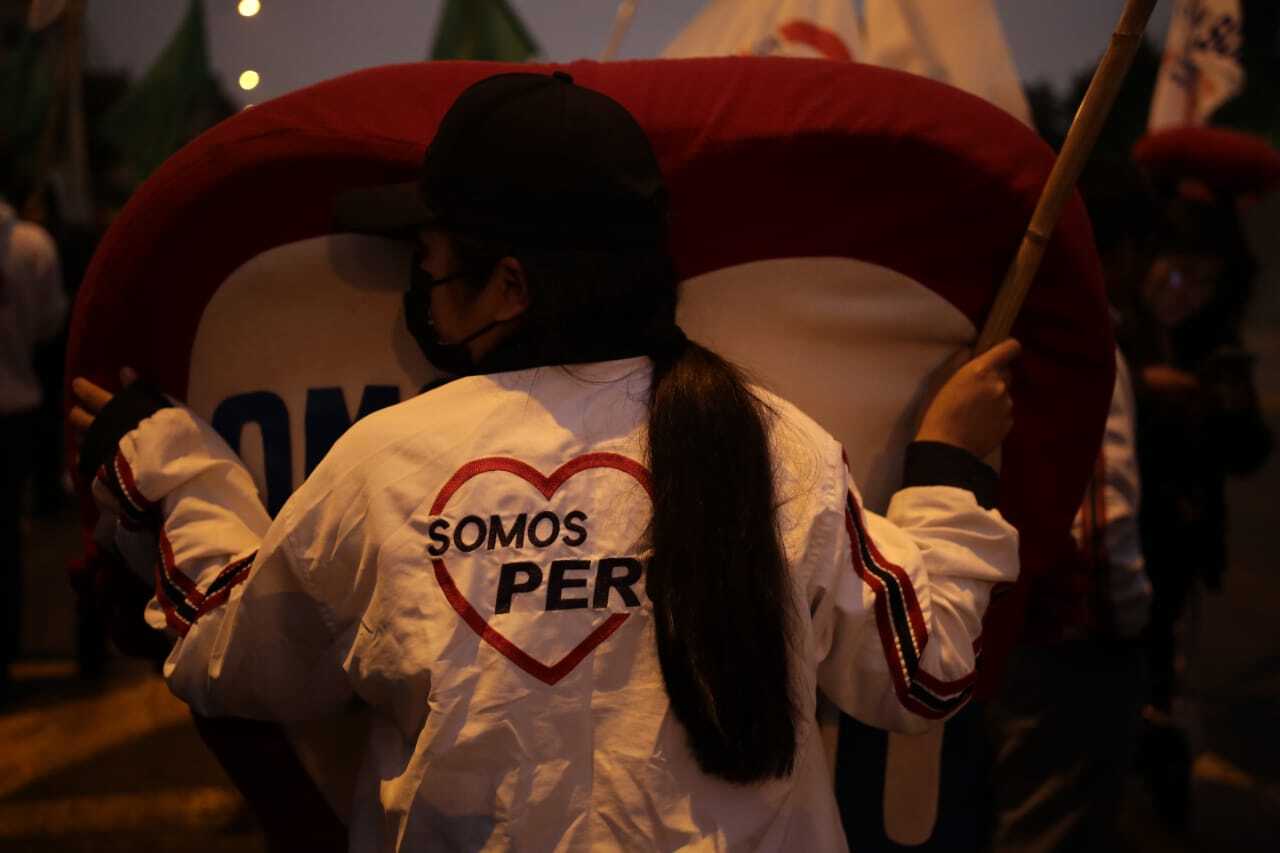 Within hours of the municipal debate between the candidates for Metropolitan Lima, the exteriors of the Universidad Nacional Mayor de San Marcos are calm, with just a few sympathizers from political stores. 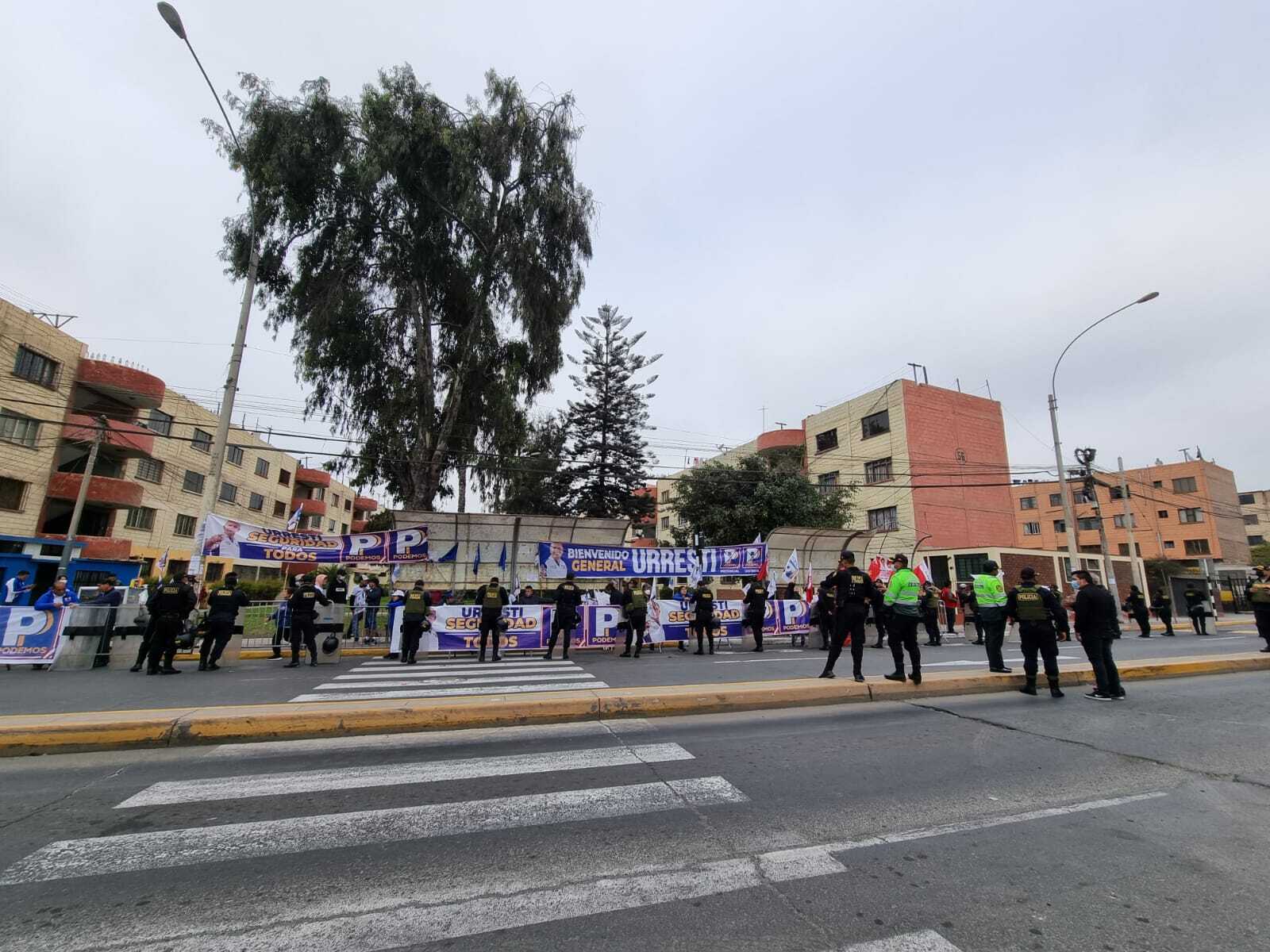 They confirm the accompaniment of Vladimir Cerrón to his candidate for mayor of Lima, Yuri Castro

The aspiring councilor for the country’s capital Pilar Santos confirmed that the leader of the perulibrista party, Vladimir Cerrón, will accompany his candidate for mayor of Lima, Yuri Castro, in the debate. 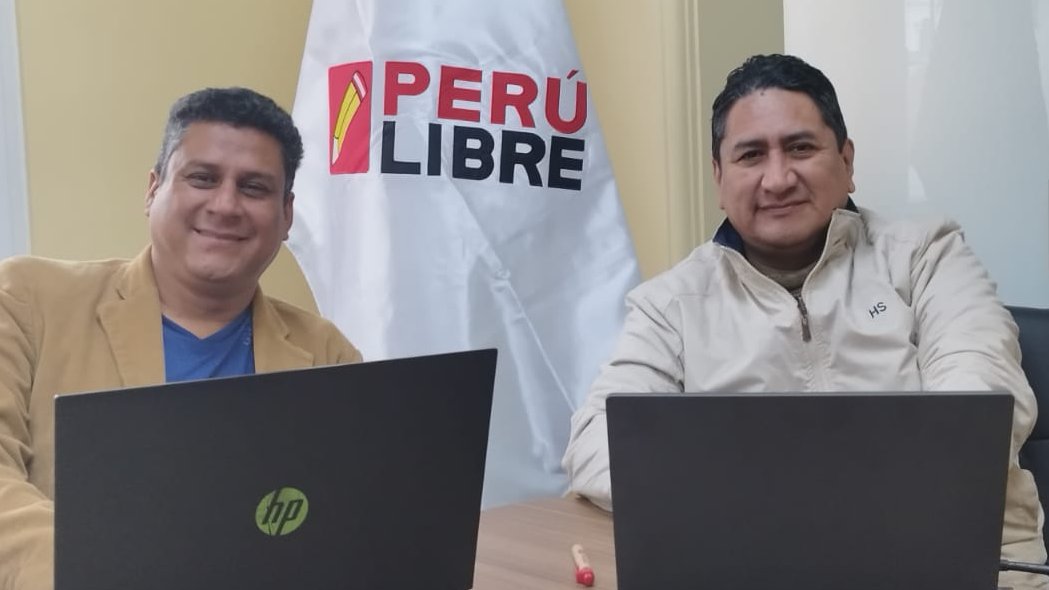 In the afternoon, supporters of some candidates approached the vicinity of the UNMSM, where the debate will take place. There they went to show their support for their favorite candidates, a few hours before the start of the contest. 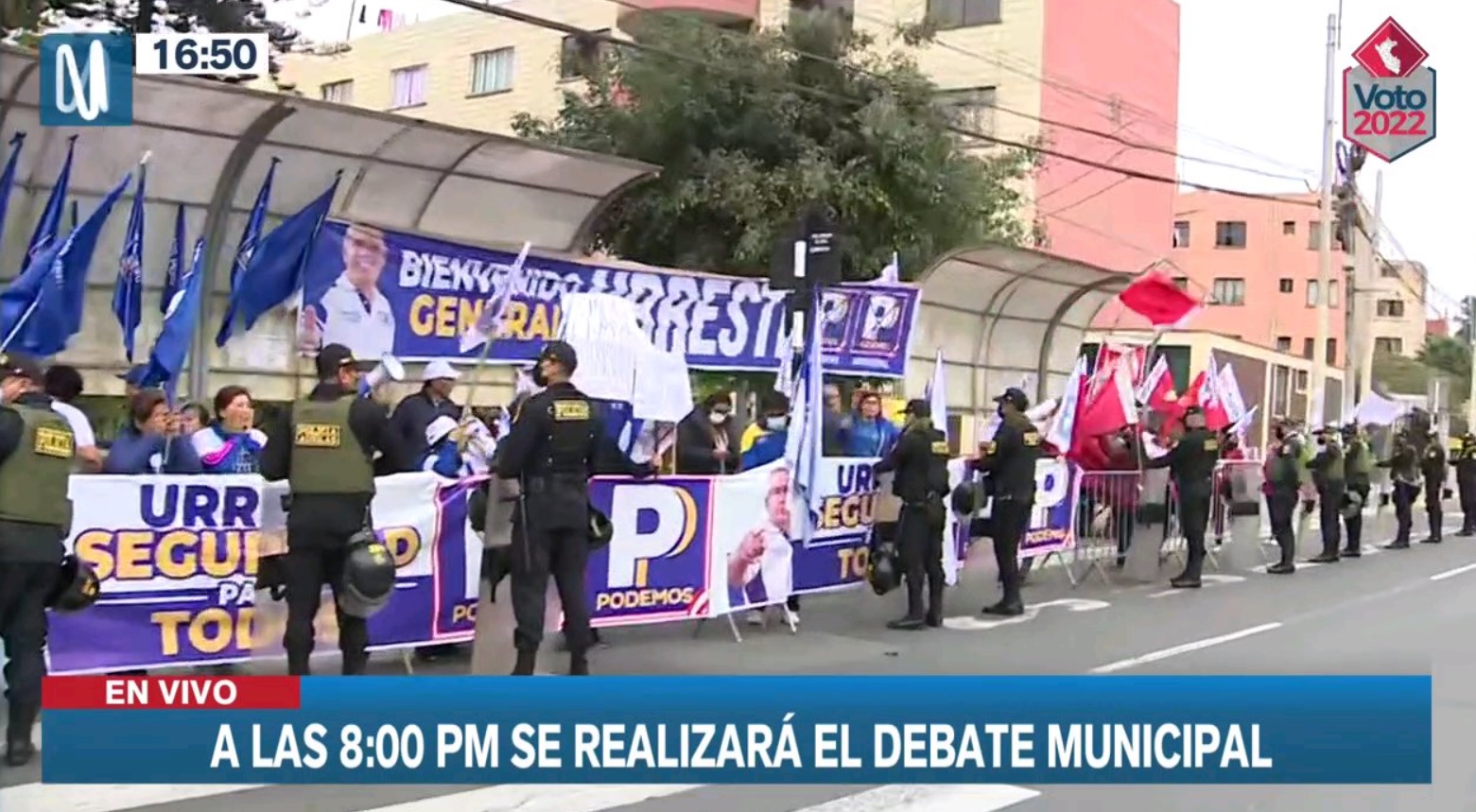 Who are Carlos Cornejo and Josefina Townsend, the moderators of the municipal debate?

The municipal debate this Sunday, September 25, will have two moderators: Carlos Cornejo and Josefina Townsend.

Townsend has been a local television news anchor and reporter, and has extensive experience, including collaborations with international media. For her part, Cornejo is a journalist and also a presenter on the national small screen. 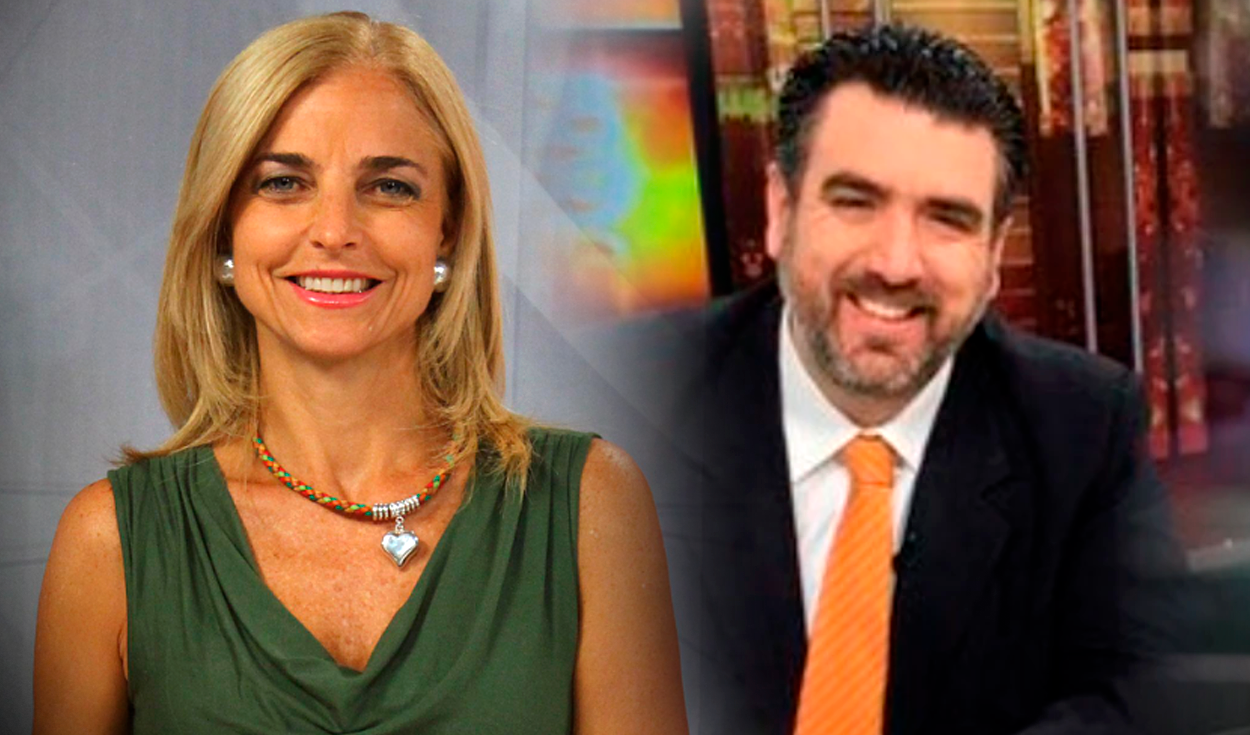 Daniel Urresti: “All the mock voting shows me as the winner”

On his Twitter account, the candidate Daniel Urresti was sure of reaching a large number of votes in the municipal elections on October 2.

“Thank you very much, Lima! All the voting simulations give me the winner. There is already a date for the sentence against López Aliaga for aggravated defamation against me: October 19,” wrote the former Minister of the Interior. 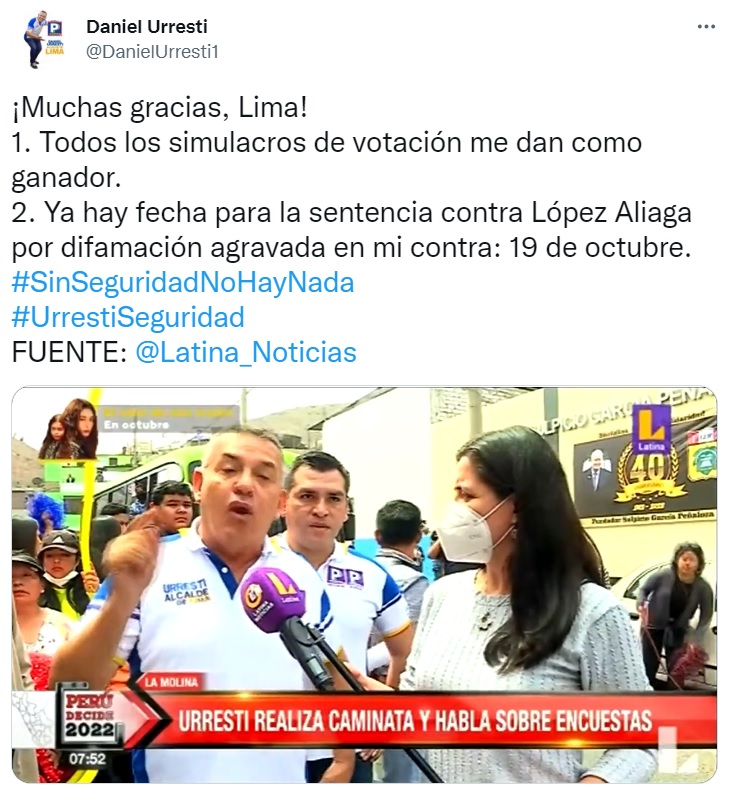 Which candidate will be the first to participate in the debate?

According to the structure programmed by the JNE, the candidate María Soto Velásquez will be the first to participate in the first segment. After that, the turns of George Forsyth, Elizabeth León and Omar Chehade will come. Afterwards, Daniel Urresti, Gonzalo Alegría, Rafael López Aliaga and, finally, Yuri Castro will continue. 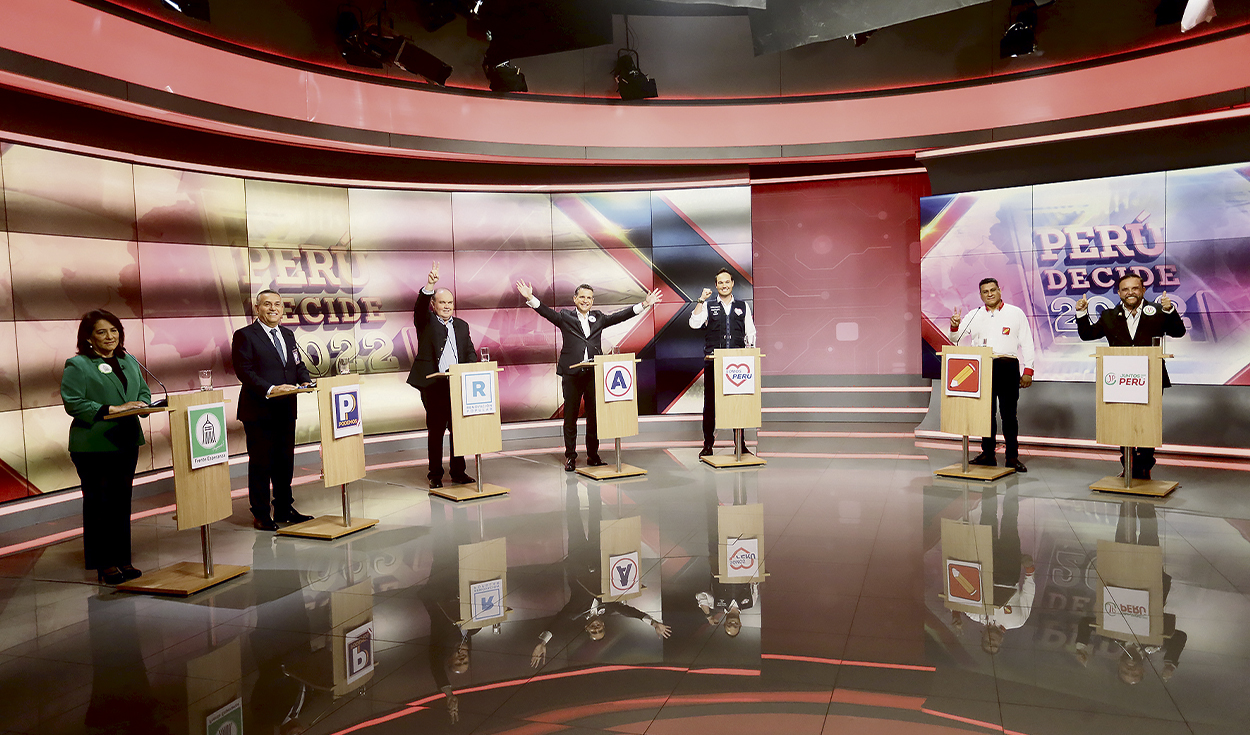 How long will the municipal debate last?

According to the JNE, the debate will last approximately 2 hours and will be divided into four blocks. In the first, 8 citizens will participate with their questions; in the second, the candidates will interact in pairs; in the third, they will answer questions from specialists; and in the fourth, the candidates will give their final messages.

How many blocks will the municipal debate have?

The event will have 4 thematic blocks with the participation of citizens and specialists through their questions. 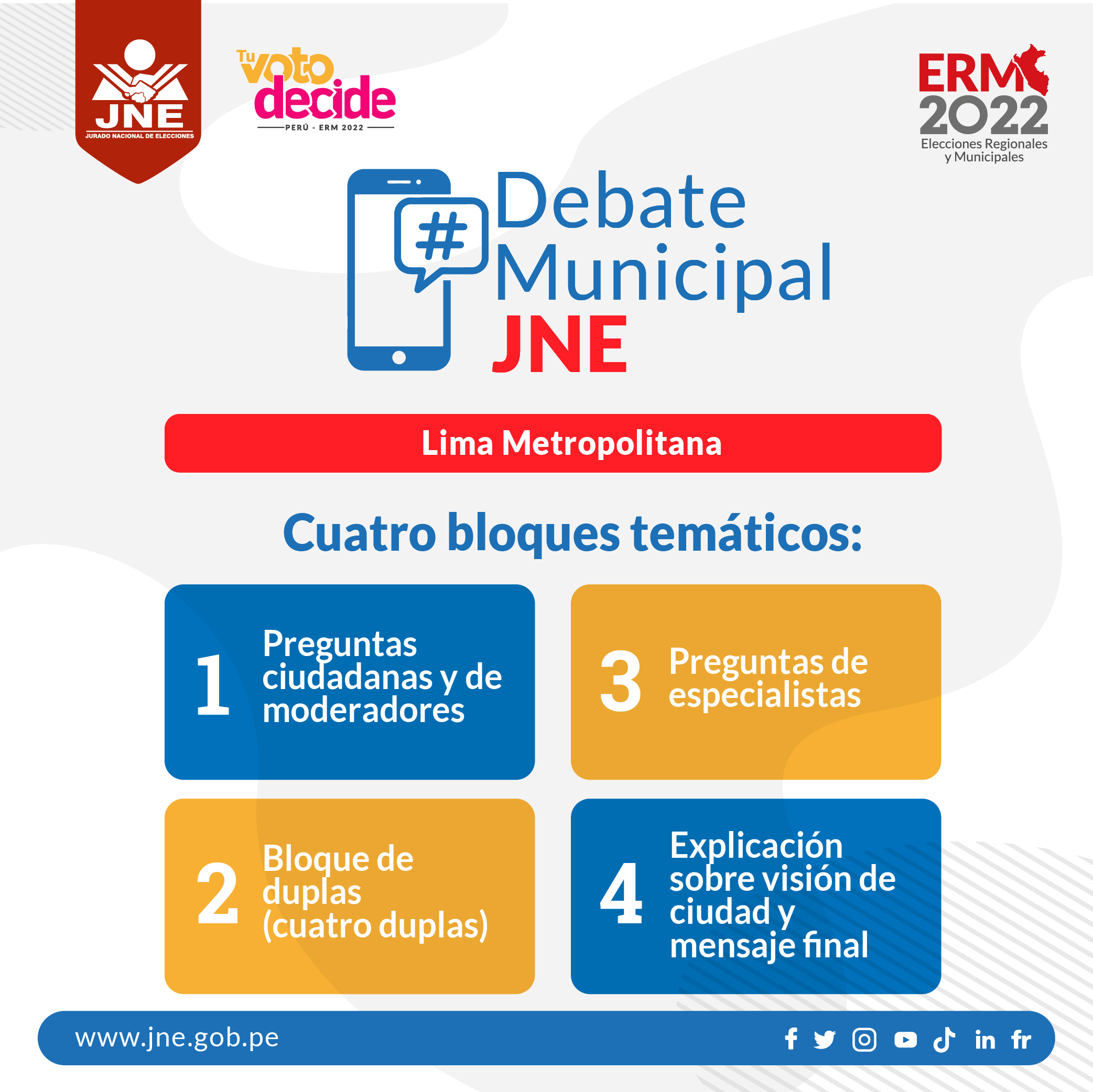 Can you vote with an expired DNI?

According to the National Registry of Identification and Civil Status (Reniec), it was reported that, exceptionally, those voters who have expired ID will be able to vote in these 2022 Elections.

This measure will also apply to those who still have an identity document for minors, which means that those who are going to vote for the first time and did not complete the process of changing their DNI to that of adults, will be able to use the DNI yellow.

Candidates toured Lima in the last stretch of the campaign

One week before the municipal and regional elections, on Saturday, September 24, the candidates for mayor of Lima toured various districts of the capital. George Forsyth (Somos Peru) was in Surco, where he referred to his resignation as mayor of La Victoria. For her part, Elizabeth León was in Comas. The candidate of the Front of Hope stated that she felt calm with a 2.4% vote preference.

Also, Daniel Urresti (Podemos Peru) was in La Molina. There he spoke about the technical tie with López Aliaga (according to the IEP survey), and pointed out that no one can feel safe. Omar Chehade (Alliance for Progress) also took to the streets, who was in the district of La Victoria and took the opportunity to say that Forsyth resigned as mayor of this district because he “never loved La Victoria.” 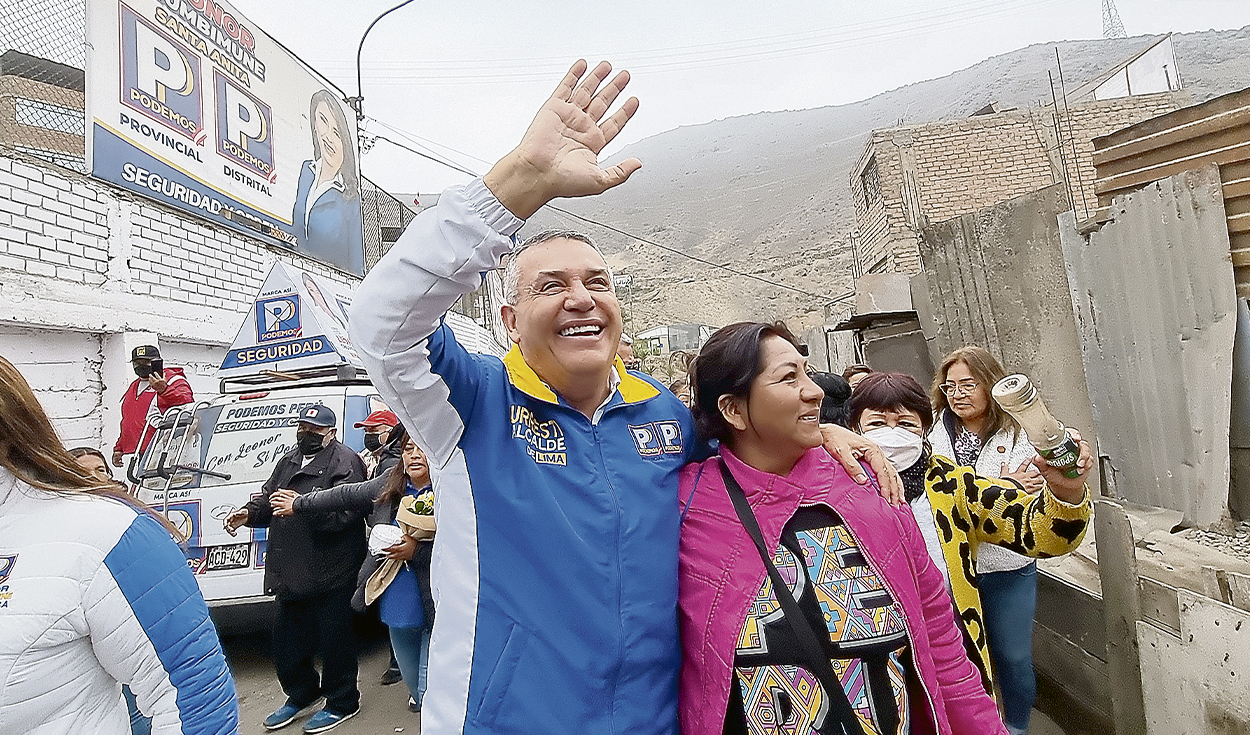 At what time will the electoral debate for the mayor of Lima be?

The debate of candidates for mayor of Lima, organized by the JNE, begins at 8 pm From that time, the candidates for the municipal seat will present their proposals to the citizens.

Just one week before the elections and with the polls quite tight, the debate will be decisive in what happens during the final stretch of the municipal elections.

How much is the fine for not going to vote?

In case you do not go to vote in the next 2022 Elections that will take place on Sunday, October 2, keep in mind that you will have to pay a fine depending on where you live.

Attention! Polling station members who do not attend without justification and who refuse to form the polling station will have an electoral fine of S/ 230.00.

What time do I have to vote?

For the 2022 Elections, it has been recommended that you attend in stages according to the final number of your DNI.

From 5, 6, 7, 8, 9 and 0, it is recommended that you attend between 2 and 5 pm At this time it is also preferable that people who are part of the risk group attend.

In any case, it is recalled that these hours are only suggestions to maintain order and avoid chaos at the voting tables. You are free to go at any time you can and no one can deny you your vote if you are between 7 am and 5 pm

How do I know where I vote and if I am a member of the polling station?

Just 7 days before the 2022 Elections where Peruvians will elect their new district, provincial and regional authorities, we help you find out your polling place and if you are a polling station member.

The process is simple. You must first enter the ONPE web portal: https://consultaelectoral.onpe.gob.pe/

After them, write your ID number and click “Consult”. There a window will appear with all the information you need to cast your vote.

Who participates in the municipal debate?

Eight candidates will participate in the municipal debate this Sunday, September 25.

What is the format of the municipal debate?

The municipal debate It is made up of four blocks. The first consists of formulating questions collected from citizens on socioeconomic, territorial, environmental and institutional issues. Candidates will be asked two questions and will have one minute to answer each one.

In the second block, the candidates will discuss their ideas and proposals through questions and responses. The JNE confirmed the order of four pairs for this exchange time, which will consist of a total of three minutes.

In the third segment, the mayoral candidates will have 45 seconds to answer two questions from civil organizations.

For the last block, viewers will listen to each politician’s final speech for one minute and 30 seconds.

The Institute of Peruvian Studies (IEP) published a telephone survey carried out in early September that shows tight figures. According to the survey, Daniel Urresti leads the list with 19.4%. Behind him are Rafael López Aliaga, with 16.7%; George Forsyth, with 16.3%; Gonzalo Alegría, with 7.4%; and Elizabeth León, with 2.4%.

Votes to decide in the final stretch

The latest IEP survey also reflects a large number of undecided. According to the survey, approximately 13.8% had not yet decided on their vote, 13.1% do not support any candidate and 5% think they will cast a blank vote or null ballot. In other words, 31.9% of those surveyed do not have a candidate.

Where do I have to vote in the 2022 Elections: Link to make the query?

In case you do not know the location where you should cast your vote, you must follow the following steps:

The Ministry of Economy and Finance (MEF) indicated that it

Did the fact that January 2 was a holiday affect the DR economy?

Like the recent holiday Christmas, New Year’s fell on calendar

ASSE invests in the Cologne Hospital

Within the framework of the assumption of the director of

Jorge Rodríguez met with the president of Colombia

The president of the National Assembly, Jorge Rodríguez, held a

Minerd: teaching begins this Monday in the eastern region and Samaná

Colombia and Venezuela finalize details to fully reopen their border

Fosters of the new protests promote their own political agenda

They abandon the town they claim to protect. The ‘indefinite strike’ called for next January 4

René Gastelumendi on RLA: You may have ideological discrepancies, but we hope you do well

This January 1, Rafael López Aliaga was sworn in as mayor of Lima for the period

Faced with the announced protests in the macro-south region, which could repeat the violent demonstrations that