This is a popular perception that has been reinforced by recent coincidences: September is a month of great earthquakes in Mexico.

Especially for a date, September 19, because that is when two strong earthquakes occurred: one in 1985 of magnitude 8.1 and another in 2017 (7.1) that left hundreds dead and the destruction of homes and buildings.

And this 2022 one more occurred on that date, of magnitude 7.6 and that was felt in the center, west and northeast of the country.

This has led many Mexicans to wonder if there is some phenomenon that makes September a month of great earthquakes.

For scientists there is a clear answer: they are just coincidenceace. Why?

Is it September when it has trembled the most? Nope

Since there are seismic records in Mexico, from the year 1900, there have been 87 earthquakes considered “big” for being of magnitude greater than 7.0, according to the statistics of the Mexican National Seismological Service (SSN).

There is a tie in 12 earthquakes between September and December in the last 121 years. Pwas June it is not far behind, with 10 major seismic events.

This shows that in reality those three months accumulate the greatest seismic activity, but for a marginal difference. The rest have varied records. 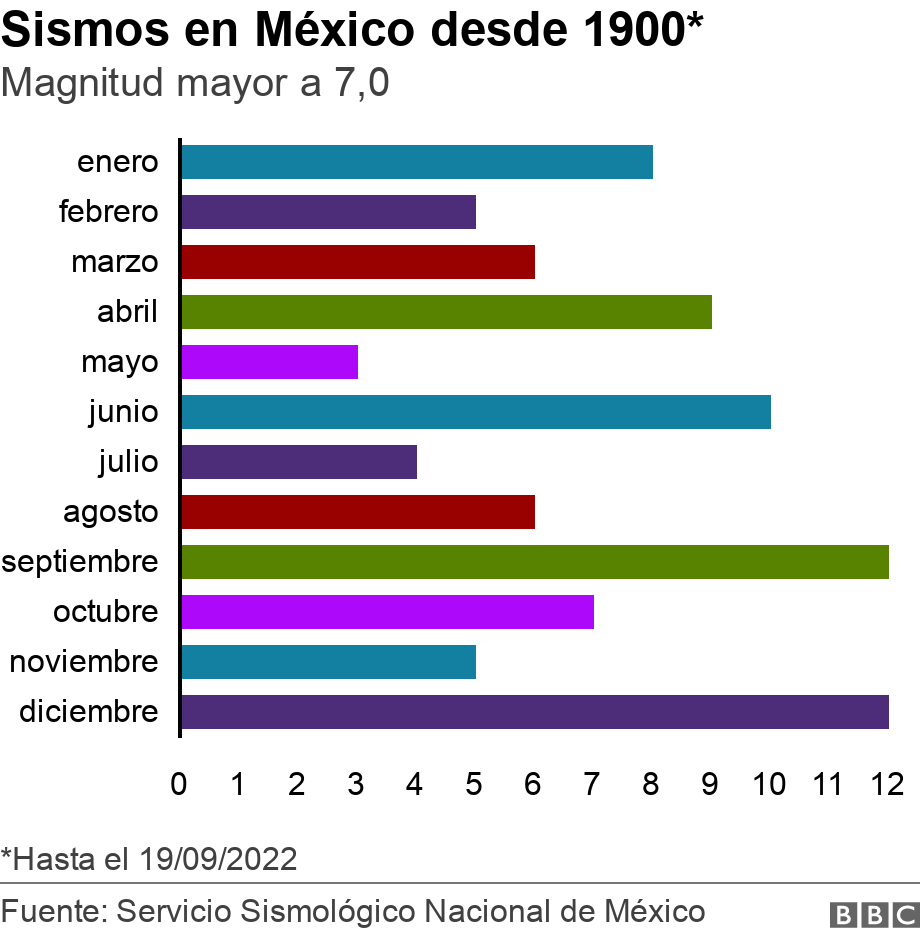 Why do people “feel” like shaking more in September?

Scientists acknowledge that the population’s hesitation is understandable given that a person is used to relating the events that they have had to live.

“This is a perception. Valid perception, logical perception of people, because we are used to measuring natural phenomena on the scale of human life, which is not always the most appropriate point of view,” says Mexican seismologist Luis Quintanar.

“To measure its frequency, its intensity, it must be on a geological scale, not on a human life scale, which is 60, 70 years, but on a slightly larger scale of 100, 200 or more years,” he added.

﻿Can earthquakes be predicted? Nope﻿

Scientists from the SSN and the National Autonomous University of Mexico (UNAM) say emphatically that it’s not possible know when it will tremble againincluding whether it will happen again on September 19.

“Earthquakes cannot be predicted. And this must be taken very clearly from both points of view: we cannot say when an earthquake is going to occur, but neither are we going to be able to ensure that earthquakes will not occur,” said Jorge Aguirre, from the UNAM Engineering Institute.

The populations of central, southern and southeastern Mexico, including the country’s capital, are exposed to seismicity due to the various geological faults in their surroundings, so it is likely that seismic events will continue to occur.

As the belief proliferates that September is a month of large earthquakes, it has also spread among the people that this could be due to Since it is the rainy season, it can have some effect on the subsoil.

But it is not like that: “From the scientific point of view (…) neither the rains, much less other things have to do with the fact that it trembles more in September. Not only in Mexico, in the whole world there is no evidence of this,” said Arturo Iglesias, head of the SSN.

“Perhaps the exception is the seismicity that is sometimes induced by the recharge of dams. There yes, sometimes, when a dam is recharged in a typical way, for example, after a hurricane or something like that, small local seismicity usually occurs that has to do with the weight of the water itself that alters the stress state around a dam,” he explained.

And is there a relationship between earthquakes and climate change? Nope

Related to the most intense rains, hurricanes, floods or droughts in recent years With climate change, doubts have also arisen as to whether there may be a relationship with earthquakes.

But the experts again indicate that there is no evidence of that.

“There is no correlation,” Rosa María explained. Ramírez, director of the UNAM Engineering Institute.

“Climate change causes disasters, like earthquakes. But there is no correlation,” she emphasized.

Scientists say that technology has evolved in recent decades to improve the detection, measurement and forecast of affectation of an earthquake, which saves lives through early warnings and the improvement of building codes.

But they ask the population prevent the spread of rumors like the one that September is a month of “big tremors”.

Remember that you can receive notifications from BBC News Mundo. Download the new version of our app and activate it so you don’t miss out on our best content.

Men aged 25 to 49 top the list of monkeypox infections

The Department of Epidemiology of the Ministry of Health (MINSA)

Shakira and Gerard Piqué are giving a lot to talk

A super puma from the Red Devils, in “support to the Ministry of Government”, left the Viru Viru towards Chimoré

What business does Georgina Rodríguez have to be able to spoil Cristiano Ronaldo so much?