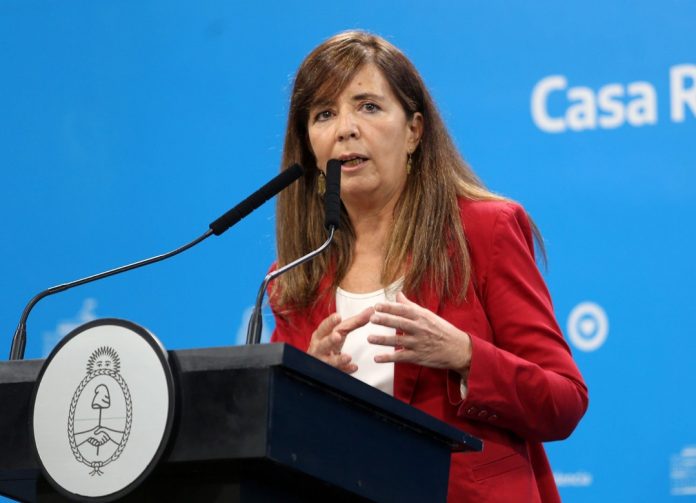 After President Alberto Fernández declared that the human rights problems in Venezuela “have been dissipating” and announced that he will move forward with the exchange of ambassadors with the Chavista government, this Friday, spokeswoman Gabriela Cerruti went even further. What generated harsh criticism from Human Rights Watch (HRW) towards the Argentine government official.

During his usual press conference, he pointed out that the situation in the Caribbean country “has changed for some time now” and valued the elections that were held at the end of last year. “It is difficult to speak of a government where democracy does not exist when the ruling party loses,” said the official.

“What planet do you live on?” Tamara Taraciuk, HRW’s acting director for the Americas, asked via Twitter. And she gave her opinion on what the Argentine president said last Monday, during the visit to the country of the Ecuadorian president, Guillermo Lasso. Through a thread of publications, Taraciuk responded to Fernández and said that “his statements about Venezuela are very worrying.”

This week @alferdez He said that in Venezuela the problems had dissipated. just the spokesperson @gabicerru He even talked about democracy.

What planet do you live on?

I share my thread about the reality in Vzla: https://t.co/lTSn4vmuHf pic.twitter.com/u1MSKjm44v

“To lead a regional response towards a democratic solution in Venezuela, President Alberto Fernández needs to start from a correct diagnosis of what is happening there. Otherwise, his efforts will serve to give legitimacy to the repressive regime of Nicolás Maduro », defined Taraciuk. And he added: “We all want Venezuela to function normally again and for Venezuelans to be able to return to their homeland. But this is not going to happen by hiding the reality.

Alberto Fernández’s desire to reestablish ties with Venezuela and cover the embassy in Caracas, based on the supposed changes in the country presided over by Nicolás Maduro, generated discomfort in the Venezuelan opposition. Its main leaders rejected the statements of the Argentine president. Among them, the president of the National Assembly, who at the time was recognized as interim president by more than 60 countries, Juan Guaidó. Who wrote directly to Fernández through his Twitter account.

President @alferdez: If you want to help Venezuela, demand free and fair elections with us, with conditions included in the recent EU report, demand justice for victims of human rights violations indicated by the UN and the ICC. Denying the dictatorship does not help Venezuelans https://t.co/pbrr41ffSv

“President Fernández: if you want to help Venezuela, demand free and fair elections with us. With conditions included in the recent European Union report », he said. He also asked her to demand justice for the victims of human rights violations. “Denying the dictatorship does not help Venezuelans,” he said.

Guaidó maintained that “Venezuela wants the best relations with Argentina and all countries.” But that “is only possible in a democracy.” And he warned that “the denial attitude towards a dictatorship revictimizes millions of migrants and refugees. To thousands of victims of crimes against humanity and to an entire society that resists».

The former foreign minister and candidate for president for the

Unions related to air transport, including the International Air Transport

They assassinate a construction unionist in Píritu

Unknown subjects murdered Manuel Antonio Goitia Carpabire, 61, a union leader who was coordinator of the

This Tuesday, December 27, 192 new crystals were installed in the Times Square sphere, which measures

The mayoress of the Libertador de Caracas municipality, A/J Carmen Melendezinspected this Tuesday the spaces under

The representative of the interim in Brazil, María Teresa Belandria, notified the Brazilian Government of the