Prosecutor Lourdes Samaniego, wife of Vice President Hugo Velázquez, is in the line of succession to Sandra Quiñónez, whom they intend to remove from office via impeachment.

Vice President Hugo Velázquez had stated that his wife, prosecutor Lourdes Samaniego, had resigned from the Public Ministry.

Today is a special day for me because my wife is accompanying me for the first time on the campaign trail after submitting her resignation from the Public Ministry, after 30 years of service. Thank you my love for your support forever and for being a great partner in struggle. 🇵🇾 pic.twitter.com/urVmKyfhqN

However, in reality, he only asked for permission, so he will return to the institution shortly, coinciding with the political trial promoted by the ruling party and the opposition against Attorney General Sandra Quiñónez.

“Here is the resolution that confirms that he actually asked for permission. Come back on August 29. The wife is in the line of succession of Sandra Quiñónez”, reported the journalist Jorge Torres. 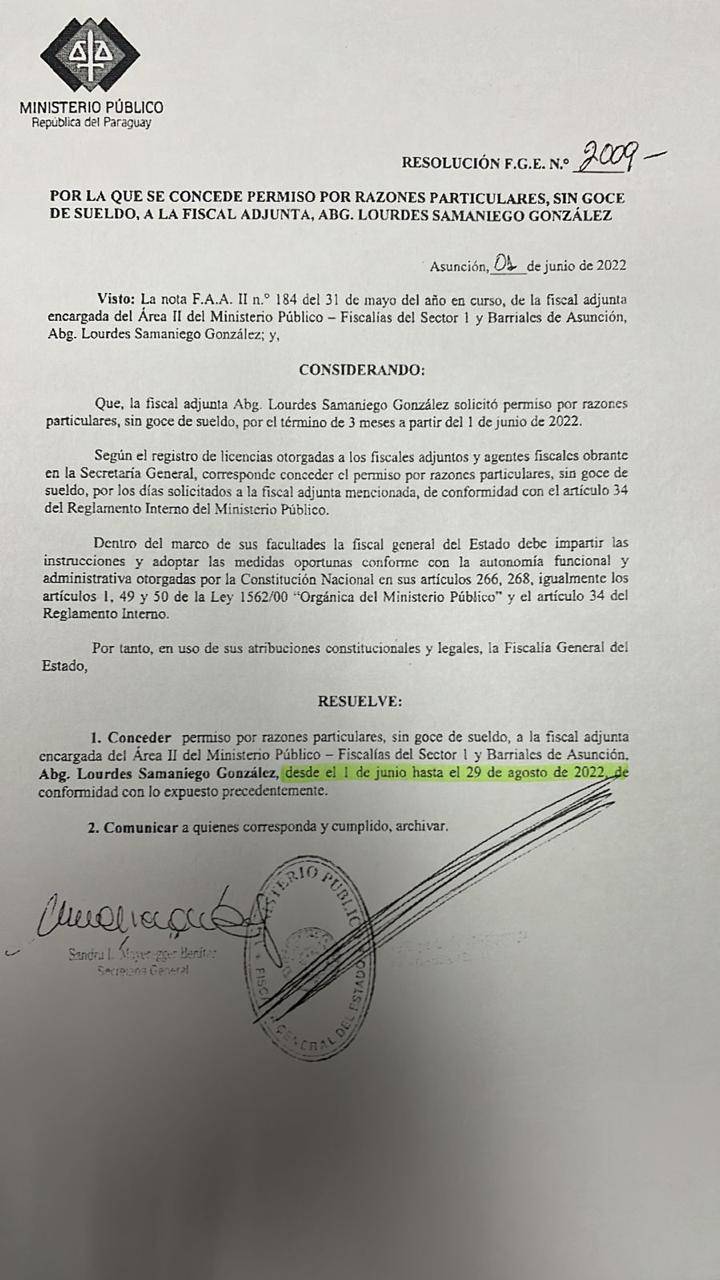 ANOTHER LIE. Vice President Hugo Velazquez had stated that his wife, prosecutor Lourdes Samaniego, had resigned. Here is the resolution that confirms that she actually asked for permission. He returns on August 29. The wife is in the line of succession of Sandra Quiñónez. pic.twitter.com/K17JK5VLar

WIFE OF THE “BULL” WANTS TO BECOME ATTORNEY GENERAL

Given the attempted impeachment of Attorney General Sandra Quiñónez, an interview with Lourdes Samaniego resurfaced, who revealed that she would like to climb to the Attorney General’s Office. She revealed to a television program that her dream is to be the head of the Public Ministry or a minister of the Supreme Court of Justice (CSJ).

He said that his aspiration was born several years ago, but for political reasons he postponed his desire to ascend to said position. She advanced that she would commit an act of infidelity by pointing out that on one occasion she analyzed the possibility of taking that step in her career together with her husband, who was serving as president of the Chamber of Deputies at that time.

“I spoke with Hugo and told him ‘I am going to run to be the state attorney general. Several times I had to give up my intentions, but I think the time has come,’ I told her, ”she recalled. However, Velázquez also expressed his intention to continue with her political career, already pointing to the Vice Presidency of the Republic. For this reason, she was forced to give up her aspirations, as she expressed herself.

Velázquez after lying about his wife’s resignation: “There was noise, I didn’t hear”

The document that evidences the lie of Hugo Velázquez. Prosecutor

Cusco: they find a fetus of a child in a chifa bathroom and a baby’s body in a river

The morning of last Monday the alarms went off in

BARAHONA. – With the participation of athletes of all the

On this day, the mayor of Colonia Carlos Moreira will

Cusco: they find a fetus of a child in a chifa bathroom and a baby’s body in a river

Immigration report reveals that fugitive pastor “walks” through the country

José Insfrán Galeano with Hugo Velázquez and Juan Carlos Ozorio. An official document from the Directorate

Works progress in the primary zone of the Integration Bridge

On the Paraguayan side of the Integration Bridge, the access works for the primary zone of

China advances with Uruguay and internalizes itself in Latin America

The Director General for Latin America and the Caribbean of the Chinese Ministry of Foreign Affairs,

Resistencia and Guaraní close date 3 with a draw in white

The Red Triangle and the Legendary shared the points on the River Plate court. (Photo: APF)

Yolanda González: “We must continue to insist on the donation”

Despite the campaigns carried out to promote awareness of organs, the battle in this field continues