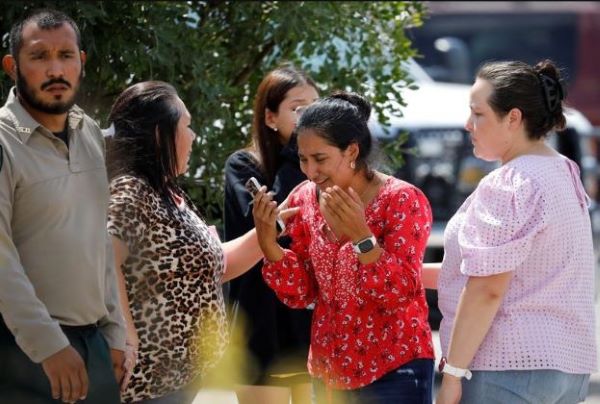 In the United States, news about mass shootings is repeated with amazing frequency. One day the incident occurs in a supermarket; another, there is a shooting in an elementary school in a poor area of ​​Los Angeles; the next day, or a few days before, a fanatic attacks the faithful who attend a religious service in a small church. There is no safe place in that country. The unbalanced can unleash their fury and hatred against humanity in an amusement park, in a high school, on a street. Any place is ripe for a tragedy to happen. Even homes are places where people are in danger. A few days ago, a two-year-old boy killed his irresponsible father in a Florida town, who had left a loaded gun within his reach. Now, the mother of that unfortunate child is in custody for manslaughter, and the couple’s three children are without their parents, under the protection of the State. The unrestrained and indiscriminate weaponization of North American society is wreaking havoc. It generates fear and insecurity that is causing the opposite effect to that desired by the ancient value of possessing and bearing arms to defend freedom.

The seriousness of the events that are taking place, the fact that the United States is the only country where these events are constantly repeated, and the approach with which some fundamental leaders of the Republican Party and leaders of public opinion linked to that group are approaching the issue to think about the future of American freedom and democracy, the most important on the planet.

In short, these figures, including Donald Trump, maintain that people over 18 years of age have the constitutional right to arm themselves to defend their lives and property. This is a constitutional right that is part of the roots and tradition of that culture, and therefore it is unquestionable and inalienable.

The most conservative sectors of the United States and, above all, the powerful National Rifle Association (NRA) -the pinnacle of the gun lobby-, have taken advantage of the Constitution to prevent any federal provision that severely restricts the acquisition of weapons. of fire, including the deadliest, which are freely sold on the market. Citizens in many states need only show a certification that they are at least 18 years of age and have no criminal record to obtain an assault rifle. With these simple requirements they can equip themselves with an arsenal.

Allowing people to arm themselves is proclaimed in the name of freedom. However, the same value does not apply to a young person buying, say, a beer. To do this, you need to have reached 21 years. That kind of freedom is associated with the possibility of ending the life of another person or persons, not with the pleasure of enjoying a smooth liquor such as a “cold.”

The defenders of the eye for an eye propose that all citizens arm themselves. That the teachers, professors and guards of the educational centers, be equipped. Schools must become battlefields, where the transmission of knowledge is not linked to the highest values ​​of the human being, but to the fear that a psychopath determined to murder whoever gets in front of him enters the school grounds, and with the feasibility of repelling it.

This vision of society and of the educational process runs counter to the course followed by the democratic nations of the West. In Europe, and even in Latin America, the trend since the 19th century -when nation states were formed, endowed with a constitution, professional armies, specialized security forces and a national judicial apparatus- has been directed at dispossessing the civilians, put an end to the private armies of the local gamonales and concentrate the exercise of legitimate violence in the State, subject to strict regulations to preserve the right to life, individual rights and constitutional guarantees. That course was followed, unevenly, by the vast majority of democratic countries. This factor did not put an end to weapons in private hands, nor to abuses of authority, but it did significantly reduce the possibility that individuals acted like happy triggers, solving problems that the courts or security forces should solve according to their criteria. Condition. To obtain a weapon, a citizen is obliged to comply with a set of cumbersome procedures. Arms are for the military and the police, who must be increasingly controlled by citizens, more professional and efficient in crime prevention and repression.

According to the NFA, most Republicans and, admittedly, a fringe of the Democratic Party, the trajectory points in the opposite direction. The way to defend against the “bad guys,” as Trump calls them, is for the “good guys” to arm themselves, or preferably, shield themselves. It is better to return to Far West. To the world of cowboys, with no sense of law and order that must be respected. It is convenient to live in the state of nature where the criteria of the best armed and who has the best aim are imposed. Everything is preferable to building a civilized society, with the rule of law, unarmed, with professional security forces, guided by citizen values ​​based on solidarity, respect for life, difference and the dignity of the other.

Some of the war groups claim to be Christian. How to be a “Christian” if they claim to break the fifth commandment, you shall not kill, by equipping all the “good” with weapons?

In some countries, harassed by violence derived from drug trafficking, guerrillas or crime, different governments have proposed disarming the civilian population, exchanging weapons for certain benefits. This policy has achieved notable successes. Americans should learn from those experiences. Freedom has nothing to do with the irresponsible acquisition of lethal weapons. On the contrary, it ends.

USA: the tragedy of armed citizens

In the United States, news about mass shootings is repeated

The palm trees thrashed this Thursday 4-0 at Botafogo and

US military plane crashed a few kilometers from the border with Mexico; five deaths reported

A US military plane crashed on Wednesday, at least 35

Commemorative acts begin for the tenth anniversary of Senamecf

The National Service of Medicine and Forensic Sciences (Senamecf), arrives at its tenth anniversary, focused on

Relatives of Yorvert Medina deny his connection with El Koki

They accuse Guaidó’s ambassador in Panama of cheating with passports

Patricia Marinella Zavarce Díaz, ambassador to Panama appointed by the self-styled interim president of the country,

The four VP activists detained in Chacao are presented in court