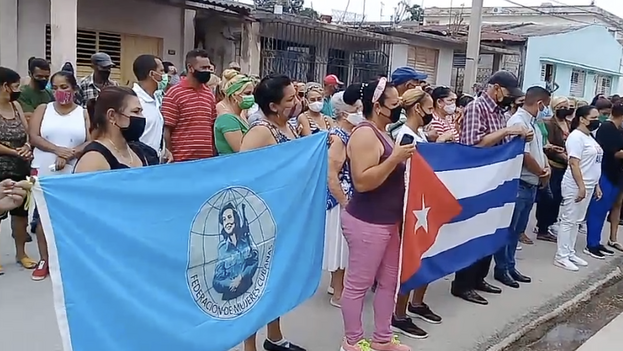 The windows of the La Continental store, belonging to the state corporation Cimex and for sale in freely convertible currency, and those of the Etecsa commercial office in Guisa (Granma) were broken by stones during the blackout that occurred on Wednesday night.

Both establishments are located in the center of Guisa, very close to each other: La Continental at number 37 on Calle José Martí and the Etecsa office, at General Milanés 156. The municipality is one of those affected by the six-hour blackouts programmed by the Empresa Eléctrica de Granma, due to breakages in the Termoeléctrica Renté and the line going out of unit number 1, according to the official explanation.

Although the windows were replaced during the early hours, the news began to spread in the groups of stewers on Facebook and its veracity was confirmed by the page of the municipal radio station Radio Sierra Maestra, which published photos and videos of the “act of revolutionary reaffirmation” that the local authorities promptly organized to repudiate the fact.

About a hundred apathetic locals gathered with flags and slogans to listen to revolutionary songs and have spent the whole morning of this Thursday being the object of ridicule on the network.

“At this time, an act of revolutionary reaffirmation is taking place due to the events that occurred on the night of the 18th of this month, where, taking advantage of an electrical failure, unscrupulous people stoned the commercial office of Etecsa in Guisa and the Pan-American store also in this mountain municipality, municipality where an example of this is this concentration of the people to repudiate once again the enemies of the revolution who are trying to undermine the gains we have achieved”, says the male voice that records the video of the event, while a girl sings out of tune Man you’re growing up by Pablo Milanés, accompanied by a guitarist.

Some Facebook users compared the event with those that started the demonstrations on July 11. Others, on the other hand, attribute a vandalism character to it, and recall the “revolutionary” tradition of the municipality, witness to the battle of Guisa, one of the few military actions against the dictatorship of Fulgencio Batista in which Fidel Castro participated in person, according to official historiography.

The windows of the La Continental store, belonging to the

The April index, which combines a series of statistics on

Ortega cancels another 19 NGOs accusing them of “instruments of neoliberalism”

The National Assembly, dominated by the Sandinista Front bench, eliminated

At the hearing, which was scheduled from July

Esteban Morales dies, who affirmed that corruption in Cuba is worse than the counterrevolution

Cuban economist and political scientist Esteban Morales died this Wednesday at the age of 79, according

Angel Rolando Castillo Sanchez, father of Rowland Jesus Castilloone of the minors in prison for his

The 27-year-old Cuban Yariel Alfonso Puerta, who jumped into the sea last Friday along with his