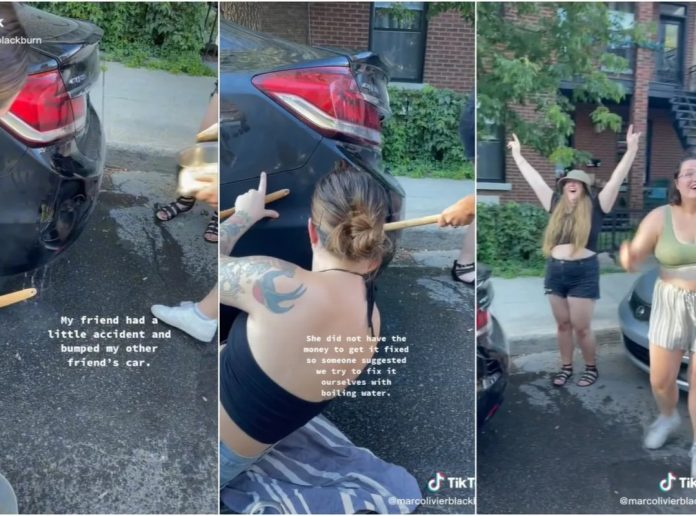 What started out as a headache ended up becoming a real life hack worthy of being shared with everyone. A group of young people managed to fix a dented car with a simple trick that was went viral.

The images appeared in TikTok, but immediately began to be shared on other social networks. “My friend had a little accident and hit my other friend’s car,” she reads in the first seconds of the video. After that, the blow that was generated by the impact on the rear bumper of the vehicle is seen in the foreground.

“I didn’t have the money to fix it, so someone suggested we try to do it ourselves with boiling water,” they add. Then, you see how they throw water from an electric kettle.

Before the temperature drops, another of the girls immediately drops to the ground to reverse pressure on the bun, while another takes an object that can be found in any house to finish giving it the final touch. It is a simple and traditional suction cup that, thanks to its suction cup effect and the heat applied to the plastic material, achieves what the young women were looking for: eliminate the bun from the bumper and make the car look like new.

“They did it!” says the video as the girls celebrate excitedly, not only because they saved a few bills, but also because of the satisfaction of having completed the challenging mission. To further illustrate the joint achievement, the song “We’re all in this together” from the Disney movie High School Musical (2006) is heard in the background.

How could it be otherwise, the reaction of the users was immediate. The video garnered more than 18.6 million views, more than 3.5 million likes and more than 14,000 comments of all kinds. Even one of the protagonists of the scene took advantage of the occasion to sentence: “This will forever be my greatest pride.” And her comment did not go unnoticed. “I feel your happiness!” a user told him. “You ladies are amazing. It was great. I hope there are many good things to come for you girls, and this will be one of many achievements, “commented another.

“They didn’t leave a scratch,” commented one surprised user, while another celebrated “how excited they are to see that it worked.” “Never underestimate the power of a poor woman,” said one user with a laugh. And in the same vein, another added: “Please, I want these girls in my life!” “Rejoicing in the achievements of strangers is my passion”, recognized another of the many people who echoed this mission accomplished.

However, it was not all laughter between the comments and, worried, another tiktoker asked: “How do I send this video to the man who crashed three hours ago?”

The comments multiplied and some even wondered what a mechanic could think when seeing the images. “I felt the emotion of saving that money,” said one in this line, and another finished proudly: “That’s why we women live longer!”

What started out as a headache ended up becoming a

Support for Cristina Kirchner: the Frente de Todos denounced the political conditioning of the Prosecutor’s Office

Both President Alberto Fernández and other officials and legislators have

The candidate for the Presidency of the Republic by PROS,

The protagonist of the questionable video of the Rejection strip,

Support for Cristina Kirchner: the Frente de Todos denounced the political conditioning of the Prosecutor’s Office

The president of the Federation of Health Workers (Fetrasalud), had denounced on August 17 his dismissal

They arrested 9 extortionists in Zulia and killed one

The Government of Iran, through its Foreign Ministry, urged Argentina on Monday to release the plane

Unitarian Platform regrets persecution against the Catholic Church in Nicaragua