Gustavo Petro is paired with Francia Márquez in the vice presidency, a black social leader and lawyer, the first Afro-Colombian to hold the position in a country with underlying racism, and who herself has said that it must be recognized and combated.

Gustavo Petro achieved his greatest political triumph, obtaining the Presidency of Colombia on the third attempt. The senator managed to get more than 11 million votes, a difference of three percentage points over the engineer Rodolfo Hernández, “the old man” former mayor of Bucaramanga.

The leftist leader is the first of that tendency to occupy the Casa de Nariño, the Colombian presidential palace. An economist and politician by training, he was a member of the M-19 guerrilla during his youth under the alias of “Aureliano”, in honor of one of the most important characters of the writer Gabriel García Márquez in his novel One Hundred Years of Solitude.

In a trill through his personal account he expressed: «This victory for God and for the People and their history. Today is the day of the streets and squares.”

Today is a holiday for the people. Let him celebrate the first popular victory. May so many sufferings be cushioned in the joy that today floods the heart of the Homeland.

This victory for God and for the People and their history. Today is the day of the streets and squares.

Of sharp positions, climbed positions until he reached the Colombian Congress, but until June 19, his presidential options had always failed. He had political affinity with Cuba and Chavismo, although during his campaign he distanced himself from that type of socialism, without going into much detail.

President Iván Duque congratulated Petro by telephone “As president-elect of the Colombians. We agreed to meet in the coming days to start a harmonious, institutional and transparent transition.”

Call to @PetroGustavo to congratulate him as president-elect of the Colombians. We agreed to meet in the coming days to initiate a harmonious, institutional and transparent transition.

The founding leader of Colombia Humana, supported by the Historical Pact, hopes to create a new axis in the region with Chile, supported by the also leftist Gabriel Boric, and Brazil, which is waiting for elections where former president Lula da Silva leads in the polls. .

Boric was one of the first Latin American leaders to congratulate him, both by phone and on social networks. He described his victory as a “joy” for Latin America. “We will work together for the unity of our continent in the challenges of a rapidly changing world.”

I just talked with @petrogustavo to congratulate him on his triumph in the presidency of Colombia together with @FranciaMarquezM. Joy for Latin America! We will work together for the unity of our continent in the challenges of a rapidly changing world. We continue!

For his part, Venezuelan President Nicolás Maduro said that the will of Colombians was defended. “New times are in sight for this brother country.”

I congratulate Gustavo Petro and Francia Márquez for their historic victory in the Presidential elections in Colombia. The will of the Colombian people, who came out to defend the path of democracy and peace, was heard. New times are in sight for this sister country. pic.twitter.com/FxodCn9Uqx

Petro is paired with Francia Márquez in the vice presidency, a black social leader and lawyer, the first Afro-Colombian to hold the position in a country with underlying racism, and which she herself has said must be recognized and combated. 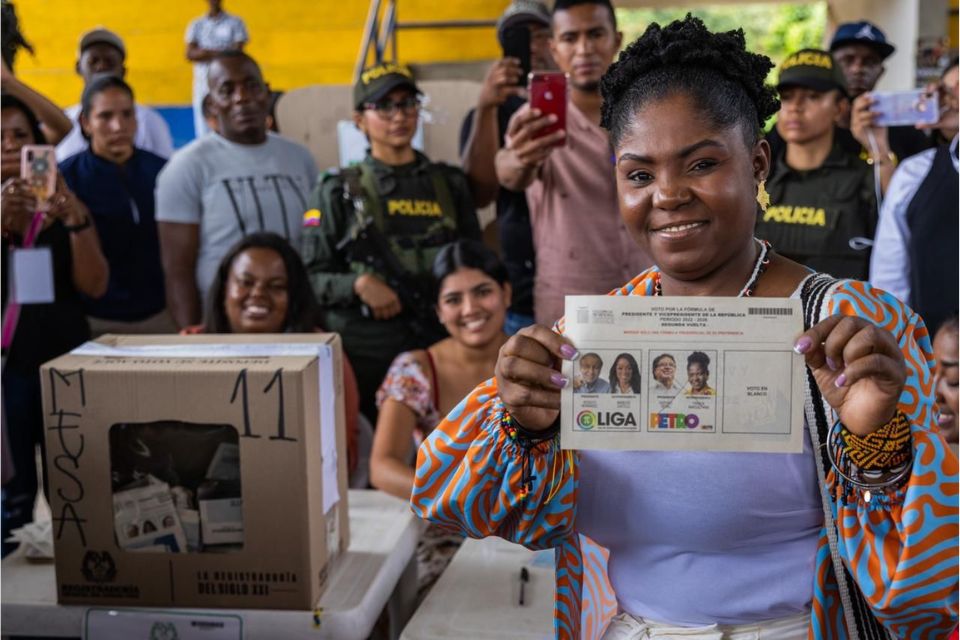 Márquez thanked all Colombians for voting “with dignity, overcoming fear and with the hope of living tasty”, her motto for these elections and for which she has been criticized.

This is for our grandmothers and grandfathers, women, young people, LGTBIQ+ people, indigenous people, peasants, workers, victims, my black people, those who resisted and those who are no longer… Throughout Colombia. Today we start writing a new story!

The economist will have to face the recurring criticism of his guerrilla past, in a country where political and business elites have made efforts to support right-wing candidates like Rodolfo Hernández. He is expected to take office on August 7.

Among his government proposals is stopping oil exploration as part of the energy transition. He believes that Latin America has to abandon extractivism and focus on production, industrialization and knowledge.

According to the Venezuelan migration, has said that «all treatment of immigrants must be framed in the openness to legality, good treatment and the free decisions of the migrant. Colombia Humana will never be on the side of xenophobic and exclusive politicians.

The Central Bank of Uruguay (BCU) increased this Friday the

The mayoress of Caracas, A/J Carmen Meléndez, was deployed through

Iturralde accused the FA of misinforming with data on child poverty

They inspect spaces for the Lídice community

The mayoress of Caracas, A/J Carmen Meléndez, inspected the spaces for the community in the Lídice