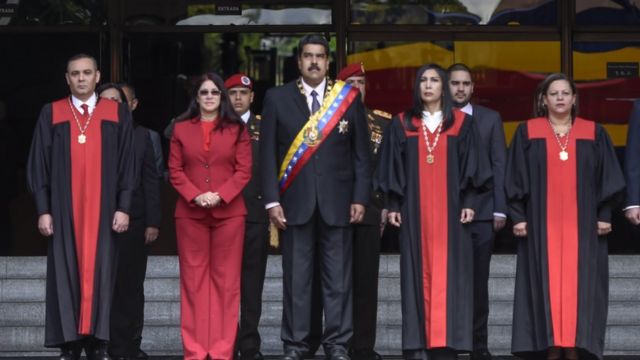 After several postponements – the appointment of the magistrates had been suspended eight times – and bitter accusations from the sector that supports Diosdado Cabello against the one that supports Nicolás Maduro, finally the PSUV, with a large majority in the National Assembly, decided to appoint the members of the new Supreme Court of Justice.

The total number of members was reduced from 32 to 20. Of this figure, 12 repeated, mainly from the Constitutional, Criminal, Political-Administrative and Electoral chambers. That is, the most important to preserve the coherence and continuity of the regime. The transaction between madurismo and diosdadismo resulted in a TSJ that reproduces, almost like a photocopy, the previous magistracy, presided over by Maikel Moreno. We can assume that, because this character had become a bone of contention, the pact was to move him from the Constitutional Chamber to the Political-Administrative Chamber, where he will have less prominence.

In the Constitutional Chamber, the most important of the Court, the seasoned militants of the Chavista cause remain Juan José Mendoza Jover and Calixto Ortega Ríos, former PSUV deputies; and Luis Fernando Damiani Bustillos, a character who has not been a deputy of that organization, but who has been linked to Chavismo since February 4, 1992. With this composition, the regime ensures that this instance will continue to act as a kind of law firm of Miraflores and the PSUV. The Constitution will continue to be interpreted by the Constitutional Chamber according to the convenience of Maduro.

As Nicolás Maduro did not think it was enough to appoint a complacent TSJ, he selected Gladys Requena, a PSUV deputy, as court inspector. The most curious fact is that Mrs. Requena was a member of the Judicial Nominations Committee that evaluated the credentials of the applicants to be part of the TSJ. According to Tal Cual, Deputy Requena has not announced her separation from the PSUV or her seat in the National Assembly.

The independence of the Judiciary, an essential republican principle to guarantee the effective functioning of that body, was again pulverized. The precepts established a few weeks ago by Francisco Ameliach, an important leader of the ruling party, in a public appearance are fulfilled: the autonomy of public powers is an unhealthy fiction; The fundamental thing for the revolution is to maintain the cohesion and unity of the State. In other words: the model that the Venezuelan regime must follow is that of Cuba, Nicaragua, Russia or any other authoritarian country, where power is concentrated in the top government. The Legislative Power, the Judicial Power and the other instances that make up the State must be subordinate to the central government. They have to act as their satellites. The fusion of all the pieces of the gear preserves its continuity.

The appointment of a TSJ so opaque and subject to the President of the Republic and the PSUV represents a provocation. I take it as a way for Maduro to show that he is the one who pulls the strings of power. Also, it represents a way to torpedo talks with the opposition; ignore the opinion of international factors that propose strengthening the rule of law by reinforcing the autonomy of the judiciary; and reach the 2024 elections in the best possible “legal” conditions.

In the list of magistrates approved by the AN there is everything, except constitutional lawyers or outstanding specialists. They get militant veterans of the PSUV, former UCV professors without the slightest sense of loyalty to the institution that paid for their studies abroad and within the university itself, people who have been executioners of the opposition and characters who have folded to the regime without any shame. They are the files of Maduro and Diosdado to show that they do with the country what provokes them.

This insolent behavior is shown at a juncture in which, due to the relative relaxation that exists, the possibility of re-establishing the mechanisms for dialogue and negotiation between the government and the opposition has been opened up, in order to explore the possibility of reaching agreements. political institutions that allow the progressive lifting of the sanctions that weigh on the regime, based on reforms that create a climate of respect for the constitutional State, human rights and, especially, that create the possibility of moving towards free, transparent and supervised voting in 2024. The election of a TSJ as biased as the current one only encourages the opposition division, the skepticism of Venezuelans and the distrust of the countries that wish to act as facilitators in the resolution of the national crisis.

The majority that the government possesses in the National Electoral Council and, again, in the Electoral Chamber of the TSJ and in the Constitutional Chamber, fuels the suspicions of the extremist opposition groups, who have refused to participate in elections while Maduro is in Miraflores. .

The submissive court is a body designed to further damage democracy and the country. The opposition will have to see how they deal with this obscenity so that it does not cause more damage than they intentionally want to cause and inevitably will cause.

After several postponements – the appointment of the magistrates had

The Government announced a reorganization in the area of ​​Communication

Valeria Zapesochny will have a new role (Photo: Twitter @valeriazape)

The Government announced a reorganization in the area of ​​Communication

This week’s rains also flooded the X-ray area at the Los Magallanes de Catia hospital, which

Border with Colombia will open on May 1

Venezuela reports only 8 cases of coronavirus

The ruler Nicolás Maduro headed, this Thursday, April 28, the act in incorporation of the symbolic