President Joe Biden and his administration are willing to “calibrate” the sanctions policy against the Nicolás Maduro regime, depending on the results of the negotiations between the de facto government and the interim government.

The announcement was made during the conversation that Biden had with Juan Guaidó when he traveled to the IX Summit of the Americas, in California, last June. In addition, ratifying his recognition as “interim president of Venezuela”, he expressed his “support for the negotiations led by Venezuela as the best path towards a peaceful restoration of democratic institutions, free and fair elections, and respect for human rights and the fundamental freedoms of all Venezuelans.

The first measure of the United States government, to calibrate the second-tier sanctions imposed on the state company PDVSA in 2019, was to authorize the Italian oil company Eni and the Spanish Repsol in June to resume shipments of Venezuelan oil to Europe with the aim of to offset Russian crude sanctioned by the European Union.

One condition for the European oil companies is that the crude oil received by the PDVSA partners in the joint ventures “has to go to Europe. It cannot be resold elsewhere.” And the other is that the oil shipments are to offset outstanding loan debts between “corporate” partners (Repsol 1.2 billion dollars in 2016 and Eni 1.76 billion dollars in 2012) and overdue dividends.

The White House believes that PDVSA will not benefit financially from these cashless transactions, unlike Venezuela’s current oil sales to China.

However, in June, Venezuela’s oil exports indicate that PDVSA obtained an income, once the aliquot of the debts was paid, of more than 100,000,000 dollars for the Repsol and Eni shipments of 1,900,000 barrels and 650,000 barrels of 17 degree API diluted crude oil (DCO), respectively, according to data from TankerTrackers.com. The current reference price of Merey (API 16) of 88 dollars per barrel for May according to OPEC, generates a difference with respect to the estimated value of the loan that, once the operation is carried out, is transferred to PDVSA.

In contrast to shipments to China, these shipments are not discounted because they are not sanctioned. In addition, they are paid within 30 days, while the payment by the Chinese independent refiners is made in 60 or 120 days.

On the other hand, the sanctions of the European Union on Russian oil, due to the invasion of Ukraine, have redirected crude oil exports from Russia to China. What has been displacing the placement of Venezuelan oil in the refining market of the Asian giant. 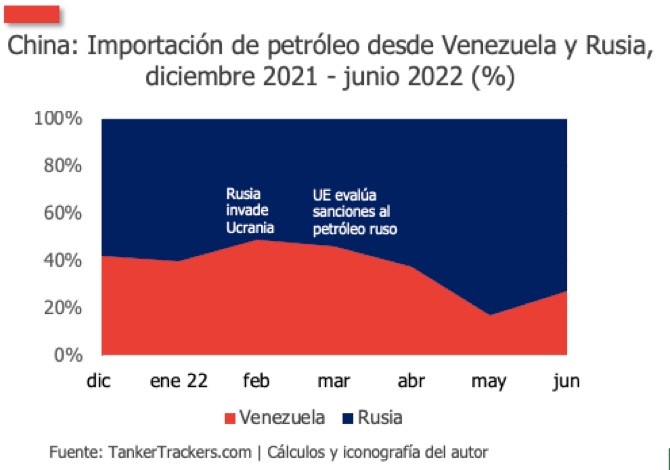 For now, Maduro remains reluctant to come to the negotiating table in Mexico, buying time to consolidate his position that it is better to cohabit with his regime. He knows that he is neither the first nor the last authoritarian government with which the United States must maintain international relations.

Rather, the meeting with top US officials from the State Department and the White House in March has led to a relationship of quid pro quo between the Biden administration and the Maduro regime.

The American hostages Jorge Alberto Fernández and Gustavo Cárdenas, freed by the Venezuelan dictatorship in exchange for the exclusion of Cilia Flores’s nephew, Carlos Malpica Flores, from the United States Treasury’s sanctioned list, have meant that the “peaceful restoration of the institutions democratic, free and fair elections and respect for the human rights and fundamental freedoms of all Venezuelans” is not among the priorities of Maduro and company. Above all, after the triumph of Gustavo Petro in the Colombian presidential elections.

The calibration of the US sanctions against the Maduro regime in the oil area should take into account that the heir to Chávez needs international companies to take advantage of the high prices of crude oil in the coming years, since the demand of the Chinese market is being satisfied by Russia. Venezuela’s crude production would have to be placed in refineries in Europe and the United States in the Gulf of Mexico.

Follow the policy of quid pro quo and calibrate the individual and economic sanctions will prolong the madurista regime for another period. This will make the Biden administration swallow the frog of the Venezuelan narco-tyranny, with what it means for democracy in the West.

The risks of “calibrating” US sanctions against the Maduro regime

President Joe Biden and his administration are willing to “calibrate”

They agreed on the need to deepen bilateral relations and

After three months of strike, the servers of the Central

Colombia is the champion of the Bolivarian Games: this is how the medal table was

The XIX Bolivarian Games came to an end this Tuesday,

The filmmaker Luis Alberto Mata, designated as the order speaker, called for the strengthening of the

The President of the Bolivarian Republic of Venezuela, Nicolás Maduro, “with the highest honors”, commemorates the

They caught three requested with 40 cartridges and a grenade

Three subjects who were requested by various courts were arrested and 40 cartridges were seized, among

With different activities, the embassies of the Bolivarian Republic of Venezuela commemorated this Tuesday the 211

El Tiempo: Iván Márquez would have survived the attack perpetrated in Venezuela

Alias ​​Iván Márquez, head of the Farc dissidents, would have survived the attack against him perpetrated