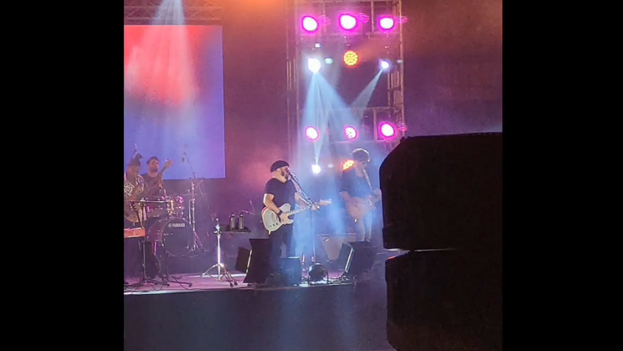 Cries of “freedom” crept in on more than one occasion during Carlos Varela’s performance this Saturday at the Havana World Music Festival, at the Ciudad Deportiva Coliseum in Havana.

The attendees chanted the word in two moments, first when he finished singing Foto de familia, and later when he was performing The Fair of Fools, concert attendees refer to this newspaper. At the end of his performance, the singer-songwriter shouted “Long live free Cuba” and thanked the organizers – with Eme Alfonso at the head – of the event, whom he praised for “having the ovaries” to invite him to sing in Cuba.

⚠️⚠️This is exciting… young people shout “Freedom” from the coliseum of the Ciudad Deportiva de La Habana… it is the clamor of a people silenced by repression and prison… the night will not last forever! #Freedom pic.twitter.com/Y37fv9YS9Y

The singer-songwriter Carlos Varela became the musical spokesman for the desire for change in Cuba, especially in the late 1980s and early 1990s, when the winds of perestroika and glasnost arrived from the USSR, which allowed the countries of Eastern Europe break free from Moscow’s influence.

At that time, his song Guillermo Tell became an anthem, where he talks about the need for a generational change of power in Cuba. This, along with other themes such as Jalisco Park, were not only manifestations of the desire for democracy in Cuba, they also portrayed the reality at that time, during the Special Period.

These positions led to ostracism and censorship. Varela has frequently been away from major Cuban events and his participation in this concert, in which Buena Fe or Haydée Milanés were also present, is striking. The official press, which covered the activity, barely mentioned the artist and did not, as might be expected, mention the exciting moment when the word “freedom” was heard shouted from the stands.

Cries of “freedom” crept in on more than one occasion

Between March and April of this year, there were 47,354

“There is nothing to celebrate": women demand justice Mother’s Day in Nicaragua

With a flag in hand and wearing a shirt with

Harms claims that G. 200 million he received from Cartes was to cover medical expenses

According to a leaked report from the Secretariat for the

Just one day before the trial of Luis Manuel Otero Alcántara and Maykel Castillo Osorbo begins,

In Havana, the Hotel Tulipán is evicted in the middle of the night due to a false bomb alarm

(EFE).- A fire in the warehouse of a state-owned tobacco company in the western province of

Cubans pay $30,000 to avoid being killed in Mexico

“A miracle we are alive,” said Bárbara Rodríguez Téllez. This Cuban told to CNN en Español