During this long weekend, on the occasion of the holidays of June 17 and 20, hundreds of citizens will take advantage of the rest days to go sightseeing in the interior of the country, so the National Road Safety Agency (ANSV) will increase traffic controls.

The organism informed that the surveillance actions will begin tomorrow, Thursday, and will last until Tuesday. To do this, the National Road Safety Agencywill deploy a special operative. 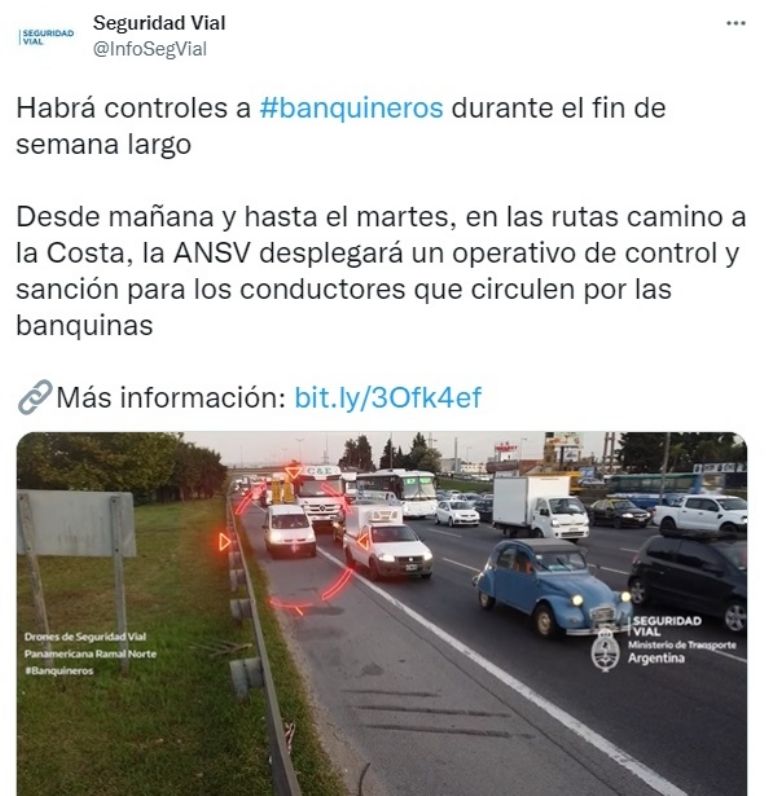 This, in order to promote road safety, reduce traffic accidents and prevent the circulation of vehicles on the shoulders, which according to the detailed National Road Safety Agencywill punish offenders.

During the operation, drones will be deployed, which will be located in fixed places on the Buenos Aires – La Plata Highway and on routes 2 and 11. In addition, preventive patrols will be carried out by the motorized division.

Additionally, random patrols will be carried out in both directions of the Pan-American Highway, in order to guarantee that all drivers move safely.

In this regard, the Minister of Transport, Alexis Guerrera, stated: “we carry out controls to change road culture with a present State that helps prevent crashes and save lives. That’s why we are going to be inflexible when it comes to controlling the bankers, and sanctioning those who do not respect the rules”.

Besides, the ANSV It will carry out the usual “documentation, speed and alcohol controls in the rest of the country through its different operational bases and in conjunction with the local security forces,” according to details.

In addition to the surveillance controls that will be carried out the organismthe entity delivered a series of recommendations to travel safely during the extra long weekend.

Among them, not consuming alcohol before driving, avoiding reckless maneuvers such as improper overtaking, avoiding distractions such as cell phone use, traveling with adequate rest and respecting speed limits.

During this long weekend, on the occasion of the holidays

Chamber concludes vote on bill that limits ICMS on fuels

The Chamber of Deputies has just finished voting on the

The Fifth Oral Administrative Court of Bogotá provisionally suspended the

Chamber concludes vote on bill that limits ICMS on fuels

Organizations asked to repeal the measure of the Buenos Aires Government: "It is an act of censorship"

Cryptocurrency exchanges began announcing job cuts. Bitcoin fell this Wednesday up to 7.8%, under $21,000 and

Central Córdoba, invigorated by the historic victory it achieved last Sunday over Boca Juniors by 1-0,

Extra long weekend: some destinations reach up to 100% hotel occupancy

After reaching record levels in tourism during the summer and Easter, the sector has great expectations