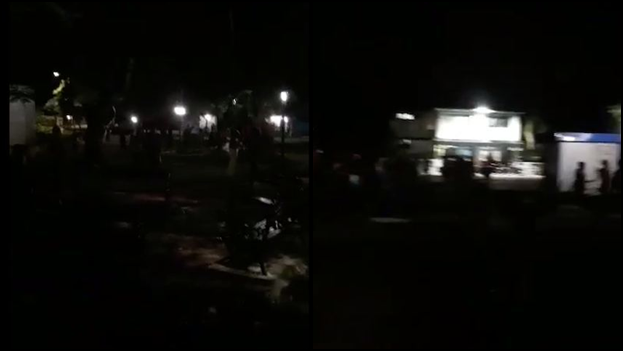 Two nightly protests against the blackouts took place this weekend in the El Condado neighborhood of Santa Clara. The neighbors took advantage of the darkness to protest loudly and with a saucepan in front of the feared Fifth Unit of the Police of that city.

A video that has circulated this Sunday on various social networks shows dozens of people shouting slogans in a park located on Estrada Palma street, near the police station.

“The County is a prioritized circuit,” he assures 14ymedio Enrique, a resident of downtown Santa Clara, “and the Electric Union avoids taking the power off. On Saturday they did it for the first time in some time and the people protested. After half an hour they restored the service. Yesterday, not too late in the night, the same thing happened.

“That neighborhood is the trigger,” explains the man, “if El Condado explodes, the whole city follows.” He points out that the most significant thing about the protests is that they took place “for the Police to see,” and in front of the Fifth Unit, which has a reputation for handling any incident in El Condado with a “strong hand.”

A recent example of this, recalls Enrique, was the death of the young Zinedine Zidane Batista, 17 years old, at the hands of a police officer. In the middle of a fight, Batista was neutralized by an officer and received several shots, one of them in the chest, which ended his life. Although El Condado is characterized by Santa Clara residents as a “marginal” neighborhood, this episode of violence deeply moved the residents of the city.

“On Saturday they did it for the first time in some time and people protested. After half an hour they restored the service”

Added to the discomfort caused by the repression are the constant blackouts and the difficulty in obtaining food and basic products, even when this Santa Clara neighborhood also functions as the center of the city’s informal market.

A Article published in the local newspaper Vanguardon August 11, informed the people of Santa Clara that they would undergo a “rotation of the four energy blocks” to “distribute” the effects on the electrical service.

The note specified that the province had “300,000 residential clients distributed in 159 circuits”, of which several received “protection”, such as circuit 3, in the center of Santa Clara, “where services committed to the population are offered, In addition to being there radio and television transmitters, banks and ATMs”.

In addition, the provincial government announced two “proposals” for blackout planning. “The first proposal consists of 12 hours divided into two periods of time, and the second, of up to 12 continuous hours, whose interruption time could be less depending on the conditions of the National Electric System.”

The “new affectation system” began on Saturday, August 13, coinciding with the protests in El Condado. Some of the comments from readers outraged by the article escaped censorship by the Communist Party, which Vanguard It is the provincial press organ.

“Are we the national vanguard in blackouts? Why are they so unfair to some and complacent with others? Are we third-class citizens?” asked a reader of the note. “Impossible”, affirmed another, “you can’t take it anymore. Until when? They do repairs, maintenance, and when they start to enter the system they have problems again. The issue of programming, keep that in mind, is abusive. We went back to the years of the Special Period”.

Added to the discomfort caused by the repression are the constant blackouts and the difficulty in obtaining food and basic products.

“People are very upset in every way,” Enrique tells 14ymedio“but the government has been able to regulate the ‘pressure’. In reality, very few people in Santa Clara dare to go out into the street, and those who do immediately give in when they turn on the current.”

“In my neighborhood,” continues the man, “very close to the center of the city, when the power goes out there are three ‘insurance women’ who go out to see what people are saying. They have children abroad and their cards loaded with dollars, a very comfortable position to ‘whistle’. Recently, in the middle of a blackout, two saucepans rang down the street and they immediately went out to see what was happening. In every neighborhood there are people like that”.

Nightly protests against blackouts are becoming more and more frequent on the island. The explosion at the Supertanker Base in Matanzas, on August 5, brings bad omens to a panorama that was already in the midst of a crisis. Starting with the nightly demonstrations against a power outage in Los Palacios, Pinar del Río, on July 15, this type of protest has been repeated in dozens of towns and cities on the island.

During the most recent Güira de Melena, In the province of Artemisa, the residents took to the streets with pots and pans and shouted “Turn on the power, pinga”, a slogan that has become common to demand an end to the blackouts.

Two nightly protests against the blackouts took place this weekend

However, he ruled out that he intends to denounce his

Today, August 15, the process of collecting signatures for the

Long lines at the border post: Argentines take advantage of the holiday to visit Encarnación

The Trauma Hospital receives victims of traffic accidents on a

The authors of ‘Patria y Vida’ will receive the "Freedom Medal"

(EFE).- The authors of the song Homeland and Life will be recognized with the “Medal of

The hippies of Playita 16 in Havana have left, now invaded by garbage

“Don’t take off your shoes!”, a mother shouted this Monday morning to her newly arrived son

Three days after having declared the fire at the Matanzas Supertanker Base extinguished, the Cuban Government

Humberto López accuses Cuban exiles of being behind acts of vandalism