The Government signed an agreement with representatives of the pharmaceutical industry to keep the price of medicines below inflation, as agreed in July.

The executive power seeks to have greater price control over medicines, since some had even risen above the general index, for which the Government made greater vigilance on speculation and price marking.

The measure will apply to all medicines that are marketed through pharmacies, including over-the-counter ones, as detailed by the Secretary of Domestic Trade led by Matías Tombolini. 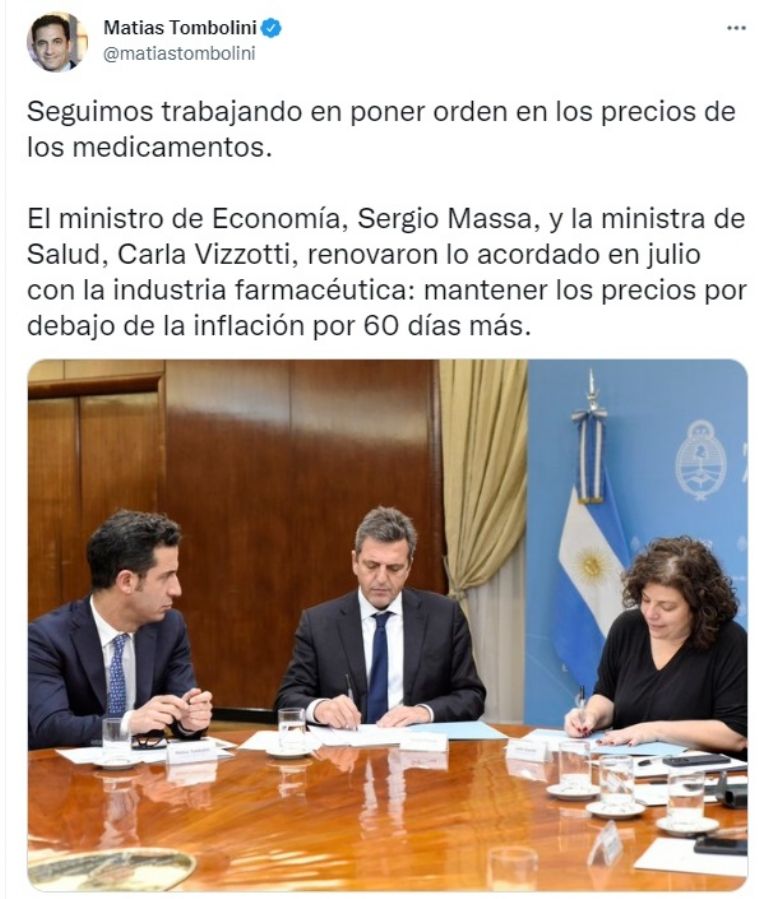 The Minister of Economy, Sergio Massa, and the Minister of Health, Carla Vizzotti, also participated in the signing of the agreement. Meanwhile, Tombolini highlighted the “coordinated work” between the State and the pharmaceutical companies, and remarked that “the objective of the Government is to continue granting predictability and guaranteeing accessible drug prices for the entire population”.

Since the executive power They also reported that “the evolution of prices will be monitored jointly between the Ministry of Health and the Ministry of Economy’s Secretariat of Commerce.”

In this regard, the chief of staff of the Ministry of Health, Sonia Tarragona, explained that “the agreement has been working well, this month medicines were almost three points below inflation, and they are also below accumulated inflation and year-on-year “, while remarking: “we will continue working with Commerce to closely monitor compliance.”

What did the businessmen say?

The president of the Association of Owners of Pharmacies of Argentina (ASOFAR), Norberto Mañas, indicated that “Although pharmacies are not price makers, we do have a central role in the implementation of this agreement that guarantees that the price of medicines is updated below inflation”.

And he added: “The pharmacies grouped in ASOFAR are going to collaborate in the control of prices so that what has been agreed is respected” for the greater benefit of the citizens.

The former Director General of Consular Affairs and Liaison of

Find out about other important news of this #20Sep

Joe Lewis staff were reported for threatening protesters. / Photo: MTE Press A group made up

Lola, the third daughter of Soledad Acuña, was born

At 47 years old, Soledad Acuna gave birth to her third daughter, Lola, who was born

Photo: Osvaldo Fanton. A large number of followers waited in the streets the arrival of Vice