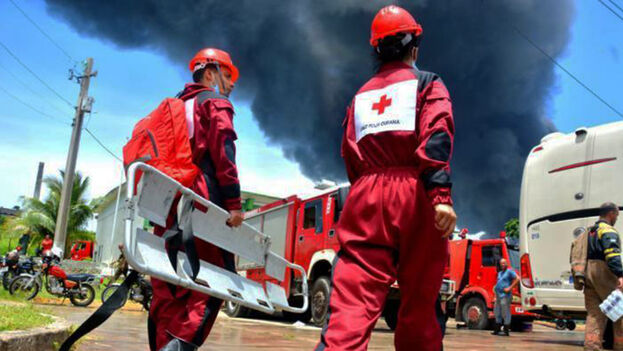 “A fault in the lightning rod systemwhich could not withstand the energy of the electric discharge”, is the official version that the Cuban Government has managed so far about the cause of the gigantic fire that started at the Matanzas Supertanker Base on August 5.

Unconvincing was the official version that has added another element this Saturday. “The First Secretary considered that the fire-fighting system apparently failed, something previously recommended,” public Granma. “It is necessary to review this issue to avoid similar events in the future, especially in thermoelectric plants and fuel facilities,” he added.

Faced with questions about whether the lightning rod system was certified by the Fire Protection Agency (Acpi), the official argument has focused on pointing out that “the energy of lightning can be very destructive, as it was clearly in this case.”

Danger Ricardo, a 37-year-old welder who works at the site, contacted by the AFP agency, said it is not explained how the tanks’ lightning rod system failed. Videos about the fire began to be shared on social networks, including a graphic uploaded to the Twitter account of an Internet user who identifies herself as Yanetsis about the security protocols at the time of a fire.

The health emergency technician based in Spain, Joaquin Alberto Reyes Franc, indicated that in the face of this type of accident it is necessary to “cool the tank” affected. “Large flows of water and monitors with huge inputs of foamy water are needed.”

Reyes Franc explained that this represents “an advanced technique of attack and patience” and recalled that “in Spain we have suffered at least three incidents of this type and the work was very hard. Especially Escombreras in 1969 (8 days of combat)”.

The accident, which according to official reports so far it has caused the death of firefighter Juan Carlos Santana Garrido and injuries to 122 people, of which 24 are hospitalized, it keeps the regime in suspense, which continues without offering details of 16 people who were fighting the flames and were close to a second complex tank that exploded.

At seven o’clock at night on August 5, lightning struck tank 52, which at that time was at 50% of its capacity, which is 50,000 cubic meters. “The most important thing is to maintain strict temperature control” of the damaged tank, rescue teams explained, the official newspaper published. Giron.

“Strict temperature” control was done through water discharges. This has been the main way to try to control and put out the fire. One day after the catastrophe, on August 6, Prime Minister Manuel Marrero Cruz highlighted the “feat” of the firefighters and reiterated the strategy to deal with the incident, as he walked away from the scene.

“The fuel tank is kept on and the water cooling of the other closest, which reduces the possibility of the fire expanding,” Marrero shared.

“We are now leaving the place of the fire in Matanzas. The fuel tank is kept on and the water cooling of the other closest one, which reduces the possibility of the fire spreading,” Marrero shared through his Twitter account, while on social networks it was observed, in addition, the discharges of water through a helicopter on the flames that soon reached a second tank.

“We are here to help prevent risks and put out the fire with water and foam,” said Brigadier General Juan Bravo, who led the Mexican expedition.

The fault in the lightning rod system, the official version of the Matanzas fire

“A fault in the lightning rod systemwhich could not withstand

Ebrard and Gutiérrez Müller, AMLO’s envoys upon arrival of the left in Colombia

The new Colombian president receives the command in a transmission

Brenes calls on Catholics to “overcome the fear that paralyzes us”, during the Marian Congress

Key themes in speeches by leftist presidents in the region

Today in the Plaza de Bolívar, the transfer of command

Ebrard and Gutiérrez Müller, AMLO’s envoys upon arrival of the left in Colombia

A tanker truck with gasoline catches fire on the Vía Blanca, a vital access to Havana

A truck from the Transcupet company had a traffic accident this Sunday on the Vía Blanca,

They identify the first fatality of the fire in Matanzas

Firefighter Juan Carlos Santana Garrido, 60, is the first identified fatality of the fire that still

The Antonio Guiteras Thermoelectric Power Plant, located about 10 kilometers from the Matanzas Supertankers, has enough