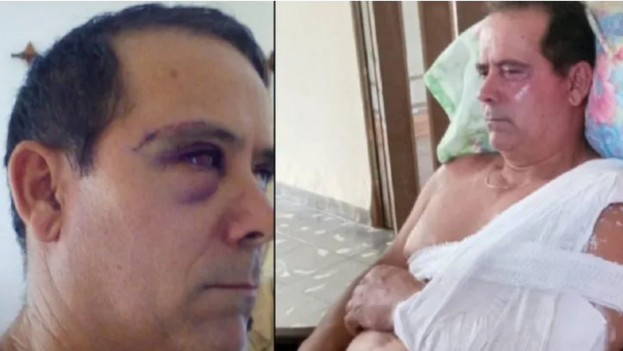 Alberto Corzo, executive director of the Cuban Institute for Freedom of Expression and the Press (Iclep), was attacked this Friday in Colón, Matanzas, by two individuals who, according to complaints, had training in martial arts. The activist links the attack with State Security, since he was leaving an interrogation when he was beaten.

According to his wife, Martha Liset Sánchez, Corzo was treated at the Mario Muñoz Monroy hospital, where he was taken by a coachman who found him on the road, and there his left arm was immobilized due to a possible injury to his collarbone and elbow, in addition to prescribe painkillers.

The statement, written by Sánchez, indicates that the medical center did not have X-rays and could not diagnose properly, so no injury certificate was issued. This Sunday, the activist was at the Faustino Pérez Surgical Clinic university hospital in Matanzas, where it was certified that he had a clavicular dislocation and was hospitalized.

“He is in a daze, it is not understood how little he can speak. They have an intravenous drip and compresses on one eye and on the man who does not have a bandage. Last night his blood pressure rose a lot,” said Sánchez, who expressed his doubts this time due to hospitalization.

This Sunday, the activist was at the Faustino Pérez Surgical Clinic university hospital in Matanzas, where it was certified that he had a clavicular dislocation and was hospitalized.

“Why do they have an IV on him? What medications are they giving him? Why is my husband barely able to speak? Why isn’t there a doctor to answer all the questions we want to ask and only a nurse to give us “Very little and half information? Why was a person hospitalized next to my husband who is supposedly being investigated by the police, which means that where they have him it seems that he is imprisoned by the police presence 24 hours a day?” asks his wife

The note published by Iclep affirms that Corzo wanted to file a complaint on Saturday, but he was not allowed and recalls that both he and his wife have suffered “systematically, different types of aggression by the Cuban regime.”

In 2021, Corzo was attacked 33 times and Sánchez suffered “the repression and harassment of the dictatorship” on 25 occasions, including arbitrary arrests. According to the same note, the children of the marriage also suffer the consequences of their parents being independent journalists.

The members of Iclep have denounced the State’s actions against them on numerous occasions. in 2017 various of them experienced episodes of this type, such as the arrests of Raúl Velázquez, then its executive director, and María Mercedez Benítez, one of its activists. Also then, Corzo was threatened with being taken to prison for his informative work and was reminded that he was accused of the alleged crime of contempt against a police collaborator.

Alberto Corzo, executive director of the Cuban Institute for Freedom

CABEI’s support for Ortega exceeds El Salvador and Guatemala together

Shanghai authorities on Monday defended the controversial measure to separate

Santa Fe: they launched a six-month moratorium on undeclared construction

They grant moratorium for undeclared constructions. Photo: Archive The Santa

CABEI’s support for Ortega exceeds El Salvador and Guatemala together