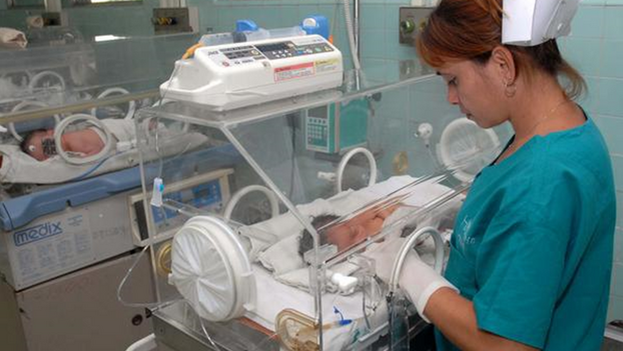 A commission from the Ministry of Public Health is investigating the death of at least 64 newborns in Santiago de Cuba, supposedly due to sepsis contracted in the hospital. According to a source consulted by the chago, a facebook page dedicated to that Eastern province, the deaths were recorded during the first six months of this year and “are associated with possible gaps in epidemiological surveillance”, related to “hospital dynamics” and even “possible violations of hygienic-sanitary standards” .

The publication does not reveal the specialty of that source, who also said that “the history of maternal infections is not ruled out, although this problem has become less common because women are examined during pregnancy.”

“The complexity of the situation with the epidemic emergence of sepsis” caused, the note continues, that the neonatologies of the first center were transferred to the Dr. Juan Bruno Zayas Alfonso hospital, known as the Surgical Clinic, and those of the second, to another floor . “At the Clinic they later put them in another room,” he also details. The Chago.

The post explains that nosocomial sepsis is a “frequent pathology” that can occur for different reasons, such as “gestational age”, “severity of the disease”, “use of antimicrobials”, “parenteral nutrition”, “repeated procedures such as central venous catheters” and “assisted ventilation”. Only in last place do they put the “natural immunological immaturity of newborns, as well as the coexistence of other factors such as low birth weight and prematurity”, although the international pages of pediatrics point out it as the main factor that predisposes the newborn to infection of his bloodstream.

“Early mornings awake and often the next day without relief, the neonatologists are leaving, some were in their homes covered by the law, others on missions, or left the country in the mass exodus”

The contagion can quickly lead, indicates the page from its consulted source, “to multiple organ dysfunction syndrome, a serious and generally fatal event if it is not detected early.”

Another source, who also does not identify by name or specialty, told The Chago that although syringes and gloves “have been in short supply”, “we have not had a lack of antibiotics” and “incubators and fans have never been lacking”.

What this source does denounce is that the human staff “has been exhausted”: “Early mornings awake and often the next day without relief, the neonatologists are leaving, some were in their homes covered by the law, others mission, or left the country in the mass exodus, and not counting those who get sick, or go on leave, that’s why sometimes there has been an overload of work for the few who are here”.

To this, he adds: “The PAMI [Programa de Atención Materno Infantil] He takes you away and puts you to work wherever he wants, because, according to them, we are his human resource. This year too, the specialty has suffered casualties of several residents due to arbitrary decisions of many of the chiefs. There are two work teams here, those of closed services and the open one, and they exchange them because they decide so, and although they are all neonatologists, each one has verticalized in something that they already know in greater depth.

The same source concludes: “The ministry says that it will be in Santiago for a long time. We are the province with the most deceased children. They are reviewing all the polyclinics and maternity hospitals. The children come in with mild symptoms and they get complicated in the therapy of La Cologne”.

Despite the fact that the health commission is ministerial, neither authorities, nor officials, nor the official national press nor that of the provinces have provided information in this regard.

The case adds tension to the once jewel in the crown of propaganda of the regime, the Health system, which has been struggling, in recent days, with a worrying increase in severe cases of dengue and a rebound in covid-19 infections.

A commission from the Ministry of Public Health is investigating

This morning, the US government requested consultations on dispute resolution

Withdrawal of sugar quota: message from the US to Ortega and businessmen

The United States’ decision to exclude Nicaragua from the sugar

Santi’s photographer summed up in the EBY for planillerismo had 51 rest days of 143 working days and at the same time she appeared in political acts.

Today, the official of the Yacyretá Binational Entity, a photographer

"If you lock yourself in your house, you suffocate from the heat and, if you open the windows, the mosquitoes kill you"