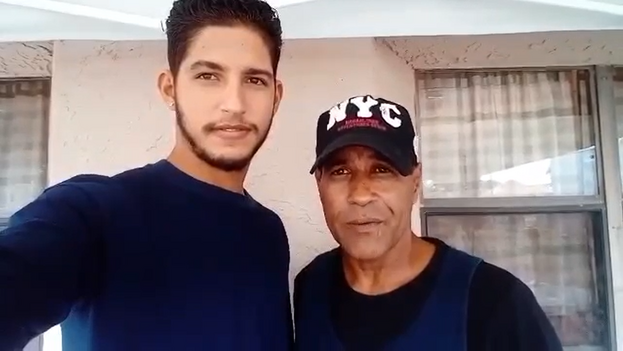 A year has passed since Daniel Llorente, better known as “the man with the flag” arrived in the United States after storming the Plaza de la Revolución during the 2017 May Day parade with the banner of the 52 stars shouting “freedom”. Luck has not been on his side since then and he barely survives in Tampa, Florida, although he cannot hide a certain satisfaction in the midst of adversity.

“I get up every day at 5, read the Bible, have a cup of coffee and I’m ready to work anywhere. That freedom is priceless,” has counted to the diary Tampa BayTimes.

“I get up every day at 5, read the Bible, have a cup of coffee and I’m ready to work anywhere. That freedom is priceless”

Llorente, 58, arrived with his son, Eliezer, in the United States in June 2021, after a long and complicated journey, like thousands of Cubans. After his appearance at the Workers’ Day march, the activist was imprisoned for a month in the 100 y Aldabó prison, and later he was transferred to the Psychiatric Hospital of Havana, known as dungeonwhere he stayed for another year.

In May 2019, State Security pushed him to leave, with pressure and threats according to his testimony, to Guyana, where he began his journey through Venezuela, Colombia, Central America and Mexico, until he reached Texas, where started his asylum process.

Then a new life began in which the difficulties were not going to be lacking. Until October 2021 he was staying at a friend’s house who took him in temporarily, but finally had to leave to look for a permanent place that he has not been able to find, due to the high housing prices in Tampa.

Shortly after arriving, both he and Eliézer, 22, began working construction, maintenance, cleaning… just about any job that came along. So they were able to buy a car, a very old Mazda that had to be repaired, investing the $900 they saved for an apartment.

Now, the car is her home, and in it she stores her few belongings: a pillow, a blanket, a bag of clothes and toiletries. His son, on the other hand, has suffered a very different fate, she works full time as a dishwasher and kitchen assistant in a restaurant in the city and lives with the family of his Cuban girlfriend.

Daniel Llorente could barely pay his bills, has been through months of inactivity, and has no family in Florida he can turn to, other than his son with whom he keeps in touch and eats often, but who can’t provide lodging. According to the newspaper, he has had to spend a few nights in Salvation Army shelters and is trying to find room at the Good Samaritan Inn, a rooming house where he hoped to sleep with other tenants for $130 a week. However, there was no space available. “But the administrator said that it is a matter of time. I am a man of faith and I believe that when one door closes, another opens,” says Llorente.

As for his legal situation, the man with the flag is still waiting for his asylum interview, a status that he should have no difficulty in achieving, since he has a well-known history as a political prisoner.

At this time, the Cuban has found work as a construction painter, but the salary remains low and forces him to turn to charities for food, clothing and toiletries.

As for his legal situation, the man with the flag is still waiting for his asylum interview, a status that he should have no difficulty achieving, since he has a well-known record as a political prisoner. The delays accumulated by the Administration, however, keep him in that limbo and unable to apply for a green card, a step prior to applying for citizenship.

Llorente has decorated the back window of his car with a photo of him and his son, hugging an American flag, the same one that is tattooed on one hand. The Cuban, in the other.

“Sometimes you have to start from scratch. Life is complicated anywhere in the world,” he says optimistically.

A year has passed since Daniel Llorente, better known as

The request was made by the US government within the

Costa Rica became the first country in Central America to

“The decision of the strike remains, since today we have

Cuba, in a terrible situation to face the food crisis created by the war in Ukraine

Walk through Havana with your eyes up to avoid landslides

Originally called the Reina Building, because of the street on which it is located, and renamed

Cuba under the table: The Summit of the Americas

The keys to understanding a Latin American meeting Reinaldo Escobar, Havana | June 07, 2022 This