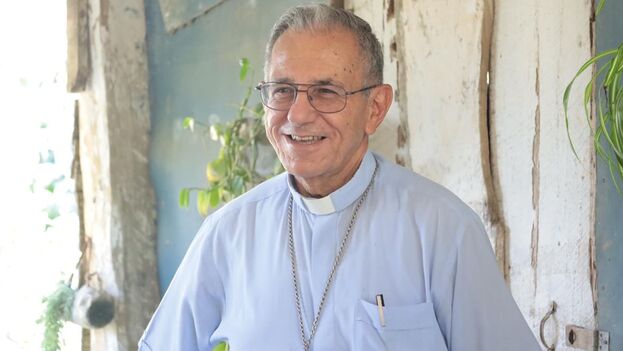 The Cardinal Archbishop of Havana, Juan García, lamented that the Cuban Government did not have a “greater understanding” with the Catholic Church on the island. an interview Granted this Saturday to the radio station Cope, from Spain, the cardinal recounted the situation in the country, the social work of the Church and the persecution of the bishops in Nicaragua by Daniel Ortega.

García, who is heading to the Vatican for the celebration of a consistory convened by Pope Francis on August 27, admitted that relations between the Church and the Cuban State have been tense during the last six decades.

“At first, the government pushed us aside,” said the cardinal, recalling the initial years of the Revolution. “Afterwards there were conversations and dialogues, in which there was a lot of progress in terms of faith.”

“Now we are at a standstill,” he settled, referring to the deterioration of the “negotiations” between the island’s authorities and the Conference of Catholic Bishops of Cuba.

“We want to talk, because we have not had the facilities to obtain what we ask for in a larger dialogue,” he added, given that no attention has been paid “to the problems of the Church and the needs of the people.”

“At first, the government pushed us aside,” said the cardinal, recalling the initial years of the Revolution

García, who celebrates his fifty years as a priest, recalled how in the 1960s the temples were destroyed and it was not possible to undertake restoration work. “He found people who, when one visited them at home, said ‘my God is Fidel,'” he said, describing the religious panorama of those years.

“For many years, Cuba was taught not to believe in God,” said the archbishop, which did not quell the “extraordinary” popular devotion to the Virgen de la Caridad del Cobre, patron saint of the island.

The cardinal pointed out that, for the Catholic Church and the institutions that support it on the island, such as Caritas and the Order of Malta, “the poor, the elderly and the family” are a priority, in addition to prisoners, especially those arrested after the protests of July 11, 2021.

“For many years, Cuba was taught not to believe in God”

In addition, he assured that attempts are being made to provide patients with the medicines they need for their treatments. “Many priests and nuns try to find them, bring them from outside and distribute them according to the prescription given by the doctor, according to the need of the person,” he said.

He mentioned the “collections” of food, resources and supplies that are carried out in the temples, in order to maintain the kitchens for the poor that, with great precariousness, the Catholic Church still maintains in municipalities and fields of the Island. We can solve all their problems, but we can guide and comfort them,” he said.

He regretted that many Cuban priests abandoned their faithful on the island, alleging that “they cannot suffer what is lived in Cuba,” in contrast to others who, being elderly and foreigners, are reluctant to leave the country while the crisis lasts.

The cardinal also referred to the persecution of bishops and members of civil society in Nicaragua, also denounced by the Conference of Catholic Bishops of Cuba in a letter of solidarity with their Nicaraguan counterparts.

“We are all surprised that there is such coercion, such persecution that is too strong,” said Garcia, who also condemned the expulsion of the Missionaries of Charity, a religious order founded by Teresa of Calcutta and with important social work in the Central American country. Daniel Ortega’s is an “aggressive” attitude, the cardinal pointed out.

During the consistory to which he will attend on August 27, the archbishop will have the opportunity to inform Pope Francis directly about the Cuban situation. The pontiff has recently offered several statements about Cuba and her relationship with Raul Castro that have caused controversy among the inhabitants of the Island.

García himself has been criticized on several occasions for his moderate stance towards the government, described as uncritical and even silent. Successor of Cardinal Jaime Ortega in the Archdiocese of Havana since 2016, many Cubans expected from this Camagüeyan priest a more active diplomatic work at a time of maximum tension between the Catholic Church and the Cuban State, such as that exercised by his predecessor.

The Cardinal Archbishop of Havana, Juan García, lamented that the

In order for Aguascalientes to become one of the three

The newspaper La Prensa, the oldest in Nicaragua and critical

Minor will serve 9 years in prison for committing aggravated homicide

The tiredness that María felt last Wednesday did not bode well, although, at first, she thought

A partially burned raft with the Cuban police uniform arrived this Sunday, without occupants, to the

Cuban experts value how "low" pollutant levels from the fire

The serious fire at the Matanzas Supertanker Base produced “low” contaminant levels, according to Cuban authorities

The Camagüey city of Nuevitas, protagonist on Thursday and Friday of the largest demonstrations in Cuba