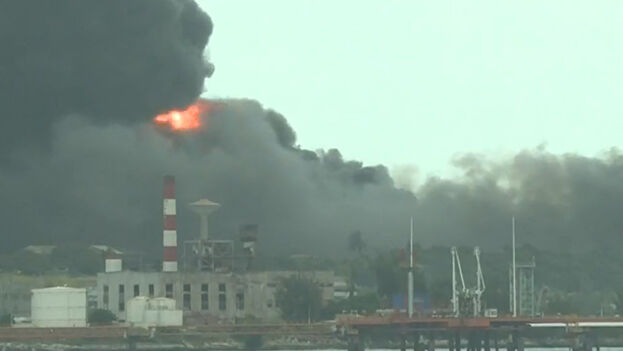 The Antonio Guiteras Thermoelectric Power Plant, located about 10 kilometers from the Matanzas Supertankers, has enough fuel to run for two days, according to the state press. After 15 hours of fire in two tankspumping from there has been suspended to the largest Cuban plant.

“In the port of Matanzas, fuel reception and cabotage operations are suspended, so work will be done alternately with Havana and Cienfuegos, depending on the draft,” the official newspaper reported. Cubadebate.

For its part, the state-owned company Unión Eléctrica de Cuba (UNE) reiterated that the incident has not affected the service of the Antonio Guiteras plant and that its operation is stable.

The state-owned company Unión Eléctrica de Cuba reiterated that the incident has not affected the service of the Antonio Guiteras plant and that its operation is stable.

At the moment, the UNE predicted for this Saturday another day of blackouts during peak hours due to the 35% deficit in demand. The report of the state company announced an availability of 2,216 megawatts (MW), a demand of 3,000 MW, with which the deficit will be 784 MW.

The UNE, which also calculates a maximum impact of 750 MW during daytime hours, indicated that it estimates that there will be outages for much of the day.

The fire has consumed two tanks at the base, one with 26,000 cubic meters of national crude and the second with 50,000 cubic meters of fuel oil imported. The fire started after lightning struck tank 52 at around 7 pm, according to information from the Ministry of Energy and Mines.

Power outages – due to failures and breakages in old-fashioned thermoelectric plants, lack of fuel and scheduled maintenance – are becoming more frequent in the country.

Last year, blackouts were one of the reasons behind anti-government protests on July 11, 2021, the largest in decades, analysts say.

Cuba relies heavily on foreign oil to produce energy and its main supplier, Venezuela, has significantly decreased its shipments

In recent days there have been several protests, mainly in small towns with prolonged blackouts, although they have also been registered in Santiago de Cuba and Havana.

Cuba relies heavily on foreign oil to produce energy (thermoelectric plants generate two-thirds of the electricity) and its main supplier, Venezuela, has notably reduced its shipments.

The Cuban government aspires to reduce this dependency and has a plan so that by 2030 37% of its energy mix (just over 3,500 megawatts) comes from renewable sources.

Cofece imposes a fine of almost 1.9 million pesos on Invex and Neology

Erdogan confirms that Turkey will pay for Russian gas in rubles

What we are discussing today is verifying whether or

Santiago Peña defends himself from the eastern escrache

After being yelled at and booed in the middle of

Cofece imposes a fine of almost 1.9 million pesos on Invex and Neology

Cienfuegos protest the blackouts in front of the provincial government headquarters

Hundreds of Cubans protested this Friday night in the Martí park, in Cienfuegos, in front of

(EFE).- The Cuban opponent William Farinas He remained arrested this Friday for several hours, according to

The fire at the Matanzas Supertanker Base spreads to another warehouse

Twelve hours after it started, the massive fire is still burning which has been extended this

The Cuban opponent Luis Manuel Otero Alcántara, arrested in the maximum security prison of Guanajay, has