Last week, Economy Minister Sergio Massa launched the now 10, a program intended for the purchase of cell phones in up to 10 fixed installments. This initiative was regulated this Friday.

Through a resolution published in the Official Gazette by the Ministry of Commerce, the regulation of the planwhich will be in force until March 15, 2023. With the now 10citizens will be able to purchase cell phones at a subsidized rate of 48%.

In it now 10the main cell phone manufacturing companies, public and private banks and household appliance chains participate. The cell phones will be available in more than 2,000 stores throughout the country..

The program will coexist with Ahora 12, through which the purchase of mobile telephony equipment can be financed in 3, 6 and 12 fixed monthly installments with credit cards.

The resolution published this Friday states: “in line with the public policies that the National State has been adopting, in order to boost consumption and encourage sales in certain market sectors, it is considered pertinent to approve the Supplementary Regulation Plan 10 Quotas ”.

With this initiative, the Government hopes that one million pieces of equipment per month will be sold. The cell phones can be purchased both in the physical and virtual stores of the companies adhering to the program.

During the launch of the plan, the Secretary of Commerce, Matías Tombolini, said: “the price agreement is fundamental. We cannot stop paying attention to consumption and we are committed to returning to the levels of cell phone sales and production that Argentina used to have”.

What cell phones can you buy?

through this initiative, Citizens can purchase 70 models of the most important nationally manufactured brands, including Samsung, Motorola, Noblex, Alcatel, Philco, TCL and ZTE. 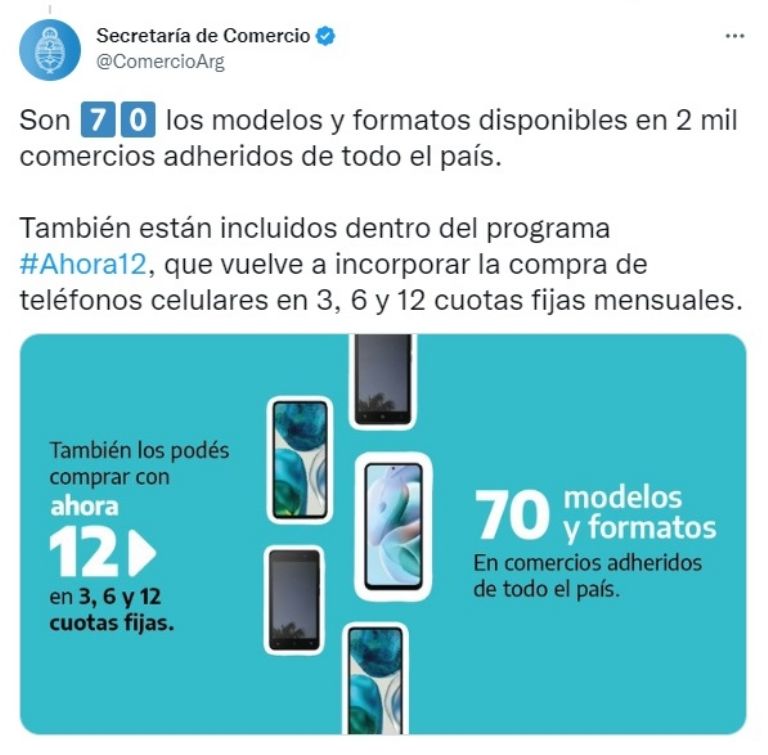 Inflation, dollar, tax reform and other economic facts of 2022

2022 ends, a year characterized by its hectic economic schedule

Violence in Cuba is increasingly alarming

Havana Cuba. — If Castroism has been effective in anything

The Mexican peso appreciated for the second consecutive session on

Maduro met with leaders of the opposition party Fuerza Vecinal

In 2021, Nicolás Conde did an internship at Conae, where he currently works as a systems

The creation of the Intersectoral Table for Food Production, Marketing and Supply was announced. /Photo: Gustavo

Teacher call against the closure of teachers. Different trade union organizations, representing teachers from the City

Fire at the hotel-casino in Cambodia. Photo: AFP. At least 19 people died and another 50

Yesterday, Tuesday December 27, Juan Graboisleader of the Movement of Excluded Workers (MTE) and part of