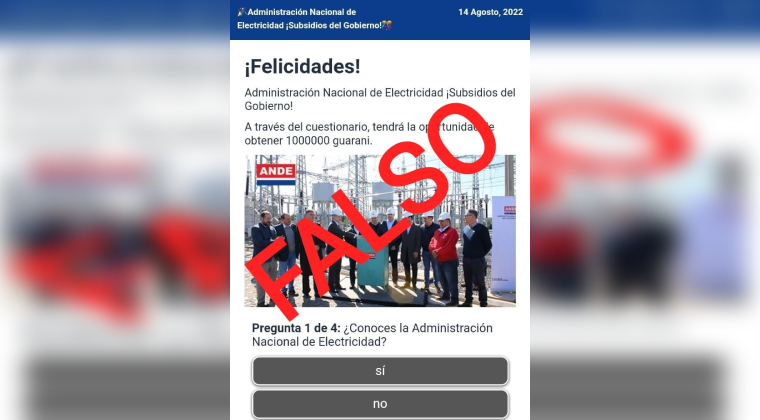 Through its official accounts, the National Electricity Administration (ANDE) made a clarification as a result of false information that began to spread in the last hours.

Specifically, it is a publication about an alleged investment project to earn money and in which a card with the Institution’s logo is shown.

The text in question contains phrases such as “government subsidies” and talks about the opportunity to obtain the sum of 1 million guaraníes by answering questions in a questionnaire.

ANDE clarifies that said publication, spread through social networks and WhatsApp groups, is totally false and does not conform to the truth, so they ask consumers to ignore it.

“We inform users that all official publication of the National Electricity Administration is made through the website www.ande.gov.py and the official social networks”, the statement ends.

Taking into account the modality in which they are invited to participate in the questionnaire, it is believed that it could be a case of phishing to steal personal data from those who access the link.

The entrance “Subsidies” for G. 1 million: ANDE denies publication that circulates in networks was first published in diary TODAY.

Through its official accounts, the National Electricity Administration (ANDE) made

Moquegua: they dismantle the alleged criminal network that promoted illegal entry to the national university

The Public Ministry reported this Sunday that a raid, seizure

The Fourth Collegiate Court of the National District imposed 20

Real estate: Chilean and Peruvian interest in Uruguay grows, according to businessmen

Added to the constant interest of Argentines in investing in

Moquegua: they dismantle the alleged criminal network that promoted illegal entry to the national university

Gunfight in Alto Verá: “Patron” Bustamante would have been injured

Remains of the incinerated ranch where the confrontation would have taken place last night. Photo: Twitter.

Olimpia wins 2-0 in the superclásico

More than 800 drivers were delayed this week by the Caminera

Asunción celebrates 485 years between neglect and decadence, but still has hope of return

The city of Asunción celebrates another year as the Mother of Cities. With 485 years since