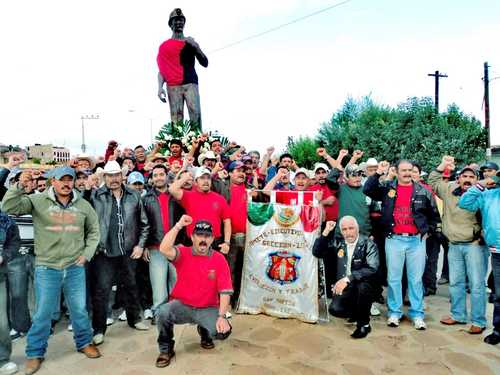 ▲ It was 15 years of fighting in units of Sonora, Guerrero and Zacatecas. The image, in this last entity, in Sombrerete.Photo the day

Zacatecas, Zac., 15 years after the strikes began in the units of Cananea, Sonora; Taxco, Guerrero, and San Martín-Sombrerete, Zacatecas, representatives of the National Union of Mining, Metallurgical and Similar Workers of the Mexican Republic and eight social organizations from Zacatecas demanded that the federal government force Grupo México, owned by Germán Larrea Mota Velasco, to comply with the law and that it recognizes that work stoppages are legitimate and admits collective contracts.

The union’s special delegate, Mario Márquez Jiménez, warned that they will file a criminal complaint against Luisa María Alcalde, head of the Ministry of Labor and Social Welfare (STPS) for not enforcing the law against Grupo México and on suspicion of possible collusion of the federal official with the directors of that transnational.

On behalf of the front, he stated: Why is the strike not resolved? Why is the company not respecting the collective bargaining agreement? In the opinion of the FSSP, it has not been resolved because the labor law reforms are a whole legal framework, slavishly imposed by neoliberal governments to defend the interests of the bosses, especially those of large national and foreign capital..

The legislator stated that the front will begin a mobilization with protests and public demonstrations, to demand a solution to the mining strike in San Martín, Sombrerete, before the end of the government of President López Obrador.

In turn, union representative Mario Márquez Jiménez reiterated that after 15 years of strike action in Cananea, Taxco and Sombrerete, We continue in the fight, demanding the government of Andrés Manuel López Obrador and the Ministry of the Interior, headed by Adán Augusto López, to fulfill their commitment to uphold the law.

Likewise, he read a letter addressed to the head of the Executive branch signed by the three unemployed sections in which they state that they will remain open to reach agreements that lead to a solution to the conflict. We fully trust your word, but it’s also been 15 years where, among workers and their families, there is a general weariness when seeing the delay of a promise to reach a justice desired for years..

Also, recalled the leader, We want the corpses of our comrades buried in San Juan de Sabinas (Pasta de Conchos), property of Germán Larrea, to be recovered in this six-year term, and we are not going to give up, we are not going to fold our hands, until we see victory and triumph.

▲ It was 15 years of fighting in units of

Single Dialogue Table approved 5.5% of the Gross Domestic Product for education in 2023

The first phase of the SINGLE TABLE of the Dialogue

In the middle of a popular party, Suárez returns to Nacional de Uruguay

Luis Suárez, accompanied by his family, was received as a

The Ministry of Health (Minsa) reported that as of Sunday,

Single Dialogue Table approved 5.5% of the Gross Domestic Product for education in 2023

“All attempts to derail the internal process were overcome,” says Morena

In a day marked by the “carry”, the “roll call”, as well as the purchase and

Militants point out anomalies in the voting of several states

▲ Top left, participation in Oaxaca, Oaxaca; on the right, in Huehuetán, Chiapas, where stationery was

PAN: “Violence in the internal election shows how undemocratic Morena is”

The blue and white leader assured that Morena, founded by President Andrés Manuel López Obrador, is

How has economic activity recovered in the states?

Tabasco, Baja California and Hidalgo were the three entities that registered the most important advances in