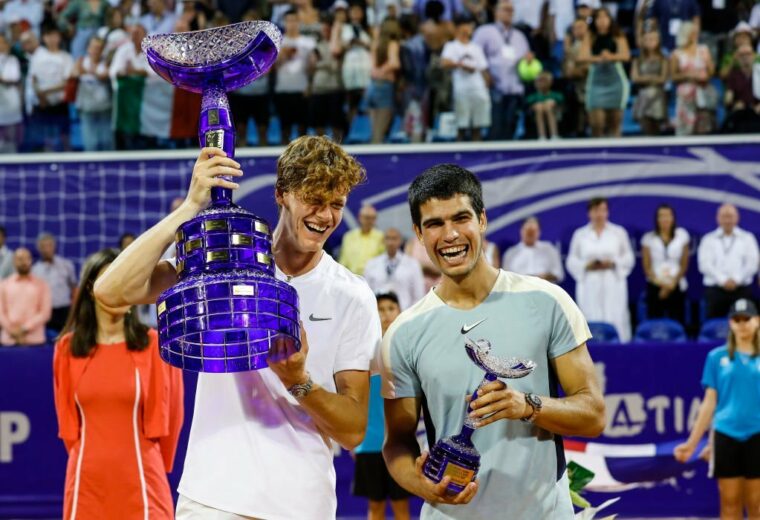 Winner of his first title of the season, the 20-year-old Italian was contesting his first final on the circuit since Antwerp, in October 2021.

“I have had a difficult year so far but I kept working hard to finally be able to lift a trophy”, declared the winner.

Sinner had already defeated Alcaraz a month ago on the Wimbledon lawn in the round of 16.

This Sunday, the two young promises showed great solidity in the service in the first set, which Alcaraz ended up taking in the tie-break.

At the start of the second set, Sinner saved six break points serving 0-1 before concluding 6-1 against Alcaraz who collapsed.

“Those six break points saved were perhaps the key to the match. I managed to raise my level of play at that time”, analyzed the Italian.

With physical problems in an ankle since the semifinal the day before against Giulio Zeppieri, Alcaraz lost 12 of the last 14 games of the match, with both 6-1 in the last two sets.

As consolation, the 19-year-old Spaniard, with four titles won this year (Rio, Miami, Barcelona and Madrid) will climb to fourth place in the ATP rankings on Monday.

“I haven’t played very well this week and Jannik deserves the win. But I will find the solution to beat him next time”, declared Alcaraz.

Sinner, meanwhile, became the third Italian to conquer Umag after Fabio Fognini in 2016 and Marco Cecchinato in 2018.

The entrance Sinner knocks down Alcaraz and wins the title in Umag was first published in diary TODAY.

Winner of his first title of the season, the 20-year-old

During his presidential address, the president peter castle announced a

Central Bank increases its monetary policy rate from 7.25 to 7.75% per year

The Central Bank of the Dominican Republic (BCRD), at its

At least two people died and 14 more were injured

After a first half in which the protagonists were in debt, the main actions of the

World July 31, 2022 2:01 PM Three earthquakes were registered this Sunday in the Ecuadorian province