The Ministry of Social Development (MIDES) presented last Tuesday a project which they called ‘personalized VAT’, which is a mechanism to exonerate VAT for 213,000 families that receive family allowances through the Tuapp mobile application.

As explained by the minister, Martín Lema, those who receive their monthly payments through Tuapp will automatically see the tax exemption. The hierarch assured that the measure “focuses on the socioeconomic situation of households”, which for him is “much fairer”.

On the occasion, it was reported that, for people who receive the benefit through the aforementioned platform, the option of recharging up to 2,000 pesos of their income per month will be enabled, which will also be subject to the total VAT discount.

Minister Lema and other officials were present at this plan, which was announced as a new idea designed for the most disadvantaged, however, since 2011 there has been a system with the same name: ‘personalized VAT’.

As stated on the website of the General Tax Directorate (DGI), a document entitled A personalized VAT design: Targeting tax benefits according to taxpaying capacity.

In the introduction, the document outlines “a personalized VAT design proposal, in which an amount to be returned to each household is determined according to the relative position it has in the distribution of income.”

In the design, the text continues, the global amount to be returned satisfies the collection sufficiency restriction and speaks of a “simulation tested” with this design that show a complete correction of the regressivity of the Uruguayan VAT, with a level of effectiveness in terms of redistribution of disposable income, comparable to that achieved by the IRPF.

The work, prepared by Gustavo González, Marcelo Montero, Leticia Olmos and Fernando Peláez, from the DGI Economic Advisory, presented several alternatives to mitigate the regressivity of VAT, saying that the solution “Most commonly adopted consists of identifying those goods of the basic consumption basket, or goods of first necessity or considered essential, and exempting them or subjecting their circulation to a reduced rate”.

This type of measure is called a ‘universal solution’, since it does not distinguish individuals according to income, but rather they perceive the benefit for consuming the good and service. “This solution, although it is focused on those consumptions that are considered essential, does not discriminate according to who makes the consumption, so it constitutes a benefit that extends to the generality of consumers.”

The proposed simulation shows how the partial or total refund of VAT included in household purchases would work with a distributive criterion, taking as a reference the relative position of each household in the income distribution.

The implicit mechanism in this 2011 proposal already spoke of a return with a high focus on the target population, and the idea was beginning to be made compatible with new technologies, thinking since then of the use of platforms for the application of the exemption.

The document can be consulted on the DGI website, in this link. 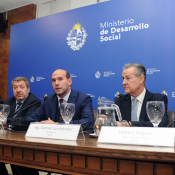 MIDES presented the “personalized VAT” for low-income households, through Tuapp

The ministerial portfolio ensures that the benefit will reach some 213,000 households, made up of…

Caught subject accused of murdering his wife with a pipe

Caught subject accused of murdering his wife with a pipe

Inflation in Argentina climbed to 64% in the year ended June

In Argentina, June inflation closed at 5.3%, boosted due to the strong rise in health, housing,

Holidays: less than 6% of children who eat in schools went for a plate of food

On regular school days, school canteens serve 201,262 children. For these winter holidays, as has been

Entrance of the Domingo Arena prison. Photo courtesy of Google Street View The multicolored coalition is

INAU will open center for adolescents with psychiatric disorders in Montevideo

As explained to Presidential Communication, this Wednesday, July 13, the president of the Institute for Children