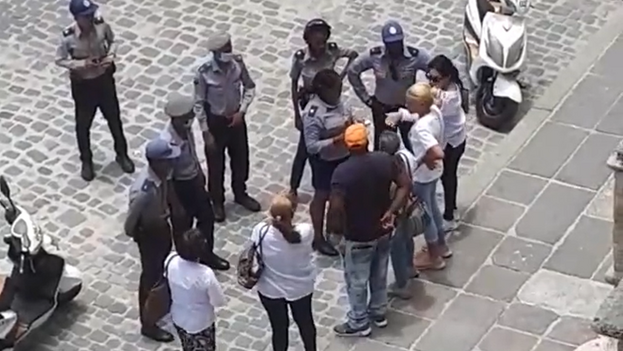 A group of relatives of detainees on 11J was arrested this Monday, after carrying out a peaceful protest on the steps of the Havana Cathedral. The protesters have been identified as Liset Fonseca Rosales, Marta Perdomo Benítez, Ailet Marcano Fabelo, Delanis Álvarez Matos, Saily Núñez and Wilber Aguilar, who were transferred to the police unit of Cuba and Chacón, in the capital.

A video posted on Twitter by the Cuban activist residing in Canada Albert Fonseca, brother of Roberto Pérez Fonseca and son of Liset, shows the group shouting slogans such as “homeland and life” and “freedom”, while an individual dressed in civilian clothes, whose identity unknown, try to silence them.

Subsequently, several police officers approached the group and demanded to see their identity documents. After the apparent dispersal of the protesters, Fonseca himself denounced the arrest of his mother, along with the other members of the protest, and blamed the “Cuban dictatorship.”

In a live broadcast, Fonseca explains that “everything was planned so that they would demonstrate in front of the Capitol.” “It is not known if there was a leak,” the activist suspects, because “it was full of police.”

The relatives then decided to look for an alternative and, considering the factor of public visibility, they marched to the plaza of the Havana Cathedral.

“The demonstration did not last at all,” adds Fonseca, who believes that the progressive opening to tourism and the recurring demonstrations have motivated “a lot of police movement.” Although the camera could not film the moment of the arrest, once the identity cards were required, the police officers detained the relatives.

According to Fonseca sources, officer Yoel Argüelles will be in charge of investigating the family’s case. He “he is one of the repressors who takes care of the activists and their families.”

Before ending his broadcast, the activist added that this is the time to put pressure on the regime through peaceful protest, since the economic crisis and the presence of international tourism on the island contribute to the visibility of the situation.

Fonseca promises to circulate more images, but says he will have to edit them so as not to harm his sources.

Since the 11J demonstrations, several people have been arrested for protesting for the freedom of their relatives. Some members of the family of the political prisoner Andy Garciadetained in Villa Clara, have been harassed and interrogated on several occasions by State Security during this year.

In February she was arrested in Villa Marista, Havana, Yudinela Castro Perez, mother of 18-year-old Rowland Castillo Castro, for demanding her son’s freedom. The same thing happened with Migdalia Gutierrez Padronmother of one of the protesters in La Güinera, detained by the Police during the anniversary of 11J for wearing white.

Barbara Farrah, mother of the young Jonathan Torres Farrat, only 17 years old, was imprisoned for several hours on December 24, 2021, for claiming that Cuban families should be united during Christmas and the end of the year. State Security has threatened Farrat several times with the possibility of prosecuting her for sedition.

A group of relatives of detainees on 11J was arrested

How to download the report card 2022 of the SEP

According to SEP 2022 school calendar , teachers will deliver

They cry out for a preventive campaign against monkeypox in Nicaragua

Before the declaration of the highest level of alert for

Despite the complaints and denunciations about the inflation of the

How to download the report card 2022 of the SEP

A demonstration in the Luis Dagnes neighborhood, in the Altamira Popular Council, Santiago de Cuba, brought

In Camagüey, another protest against blackouts while more luxury hotels are announced

Block 5 of the Nuevitas thermoelectric plant, in Camagüey, left the electrical system a few hours

The residents of Bauta, Jagüey Grande and Covadonga protest in the streets due to the long blackouts

At least three protests, in different provinces of the country, took place this Saturday night demanding

What started as a rumor has finally been confirmed. Yipsi Moreno has resigned from her position