Supreme Deputy Prosecutor Marco Huamán assured that the constitutional complaint presented by Patricia Benavides against the president peter castle does not violate the Constitution or its article 117.

“Article 117 of the Constitution provides protection to the president and indicates the four situations in which he could be subjected to criminal proceedings, but this constitutional precept, although its purpose is to give him immunity, but it cannot be impunity”responded this Wednesday, October 12, in an interview with RPP.

The day before, the Nation’s prosecutor, Patricia Benavides, filed a constitutional complaint against Pedro Castillo before Congress for considering that he heads a criminal organization entrenched in the Government that seeks to commit acts of corruption.

The prosecutor in charge of the Illicit Enrichment and Constitutional Complaints area assured that this proceeding does not violate the Magna Carta or what was indicated by the Supreme Court, which ruled on the viability of an investigation against the head of state.

“117 is not violated because we are acting based on what the court has authorized. The Supreme Court has authorized us to carry out acts of preliminary investigation. The prosecution, the criminal accusation is a much later stage”assured.

Huamán pointed out that the Constitution prohibits an accusation against the acting president such as Pedro Castillo, but said that for this there must be a prior formalization of a preparatory investigation that can only be done through Parliament.

“We have serious and well-founded elements that allow us to maintain that there is a criminal organization that would be led by President Castillo Terrones and that would have entrenched itself in various levels of the State”he stated. 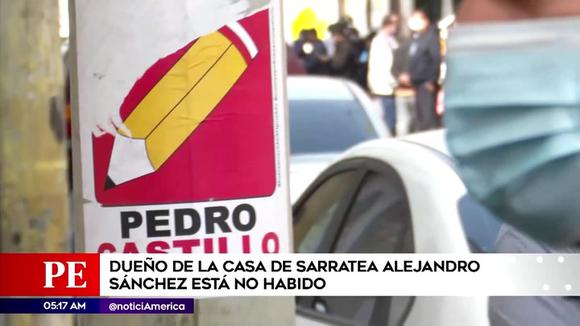 The National Prosecutor’s Office detained some five people involved in the ‘shadow advisers’ case, these detainees have an arrest warrant for 10 days, a sixth member and owner of the ‘Casa de Sarratea’, Segundo Alejandro Sánchez Sánchez, find none. (Source: America TV)

SANTO DOMINGO — A Dominican court has handed down sentences

Internal tourism: what benefits Uruguayans have for spending the summer in the country

To promote domestic tourism, the Ministry of Tourism has a

Government of Caracas carries out street correction with 1,500 tons of asphalt in El Paraíso

At the height of the El Pinar Zoo Park, Caracas

Photo: File. The Ministry of Transportation of the province of

Ramón Alburquerque: What will the vice president of electricity know to preside over the sector?

Scam: he sold a car, then he denounced the buyer and snatched

Dina Boluarte on deaths in protests: “we are not going to allow impunity”

It calls for reflection. The President of the Republic, Dina Boluartesaid today December 29 that his