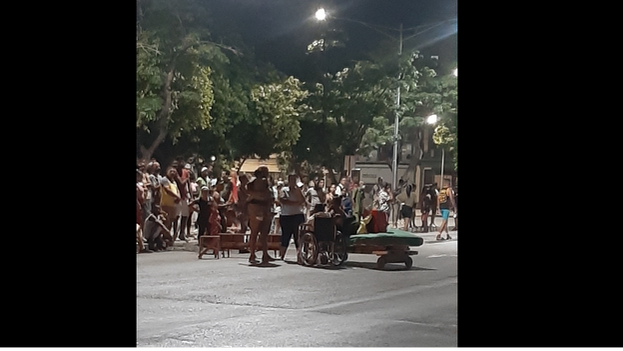 The state telecommunications monopoly, Etecsa, kept the internet cut off for at least half an hour in Cuba, coinciding with two protests that took place almost simultaneously this Friday morning in the capital and in the west of the country.

In Los Palacios, Pinar del Río, the population was shown to be fed up with the constant blackouts and power outages that they have been suffering for months, aggravated by the summer heat. A group of people took to the streets in the middle of the night banging pots and pans and shouting “we are hungry” and “Díaz-Canel singao!”, according to what could be seen in videos spread throught social media.

In front of the Party headquarters, the people of Los Palacios left their fear in the drawer. pic.twitter.com/Brhpb99dMC

Shortly after, official accounts published images of the streets of the same area in complete calm to deny not the information, but that the protests had been significant.

The same operation It happened in Centro Habana, where a woman who was protesting in Parque del Curita for homelessness was joined by dozens of mothers who showed solidarity with her cause. “11:54 at night, a Cuban mother with 2 girls and one in a wheelchair claims that they have nowhere to live because their house is in poor condition,” said a Facebook user.

According to one account related to the governmentLa Página de Mauro Torres, the protest dissolved when the first secretary of the Party in the municipality attended the woman personally.

“You have to have kettledrums and be on the side of the people so that, when there is a protest, a ruler comes forward and looks for solutions. Good for her, who is a short woman but with a tremendous heart. And also for those who, in their eagerness to solve their problems, they find a light in the attention,” said the owner of the page.

Next, several photographs of the place, located between Galiano and Reina streets, circulated calmly.

Despite their apparent transience, the protests confirm the pressure cooker that the Island has become, whose citizens no longer hesitate, despite everything, to go out and complain to the rulers about their situation.

internet cutoff, confirmed through the Inventory page, with data from Internet Outage Alertswhose graph shows a sharp drop in connectivity, was also brief, although the connection has been intermittent in the hours since, according to different people in various provinces of the Island. The interruption of the service, which was not announced for any technical reason and For which Etecsa has not given explanations at the moment, it shows the regime’s commitment to control information, which fears a new outbreak like that of the past 11J.

Night protests amid blackouts in Pinar del Río and Havana

The state telecommunications monopoly, Etecsa, kept the internet cut off

The judge of the Second Local Criminal Court of Granada,

The Bipartite Command report indicates that last night, a group

“I am selling a four-burner stove with its little ball included,” reads one of the many

Cuban Abraham Jiménez Enoa, co-founder of the independent magazine The sneeze, is among the last three

(EFE).- Cuban opposition leader Oswaldo Payá, whose death marks 10 years this month, will have a