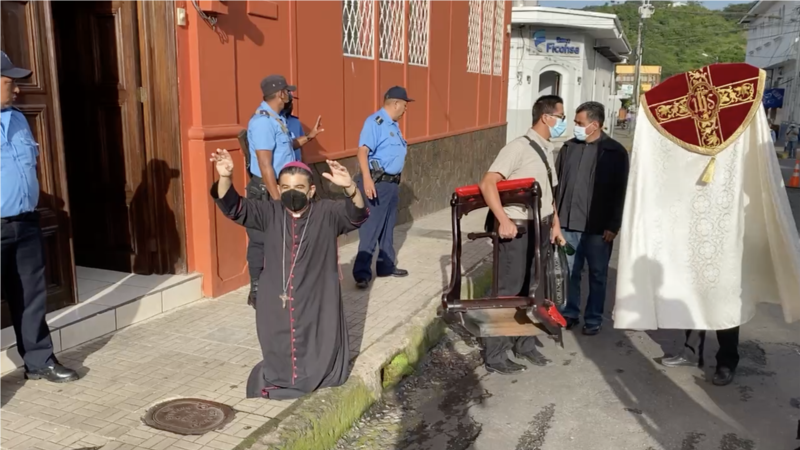 The Nicaraguan National Police broke into the Matagalpa archiepiscopal curia, located some 128 kilometers northeast of Managua, early Friday to arrest Monsignor Rolando Alvarez, one of the bishops most critical of President Daniel Ortega.

For 16 days, Álvarez had been locked up and surrounded by police, along with eight other people who were under alleged investigation by local authorities who argued that the bishop “organized violent groups.”

The Diocese of Matagalpa, over which Álvarez presided, denounced that the National Police, headed by Francisco Díaz, President Ortega’s brother-in-law, had “entered the Episcopal Curia” by force.

At the moment the police authorities have not ruled on the arrest of Álvarez, however the critical voices were not long in coming.

From Miami, Monsignor Silvio Báez, another priest critical of Ortega who was exiled due to threats against him, denounced what he called Álvarez’s “night kidnapping.”

“With an indignant and hurt heart, I condemn the nightly kidnapping of Monsignor Álvarez. Those who know, tell where my brother bishop is! May his kidnappers respect his dignity and free him! Once again, the dictatorship overcomes its own evil and his diabolical spirit,” Baez wrote on Twitter.

“Enough of so much silence. Let those who have to speak and show their faces speak, that is called” sin of omission “, Román questioned on Twitter.

Monsignor Rolando Álvarez was one of the last critical voices left in Nicaragua, after the exile of Monsignor Silvio Báez.

He is the only member of the Episcopal Conference of Nicaragua that has two positions assigned by the Vatican, such as the Diocese of Matagalpa and apostolic administration of the vacant see in the Diocese of Estelí.

Álvarez directed the communication area of ​​the Catholic Church, which included radio and television channels, which were canceled by the regulatory body.

“All our radios have been closed. But the Word of God, they will not silence it,” Álvarez said on August 1 when announcing the news. In total there were ten Catholic stations closed.

The confrontation that Ortega has unleashed against the Church began in 2018 when there were demonstrations against the president.

Ortega accused the bishops of “coup plotters” for harboring protesters in the temples.

This incident revived the dark years of the 80s, during the first Sandinista government of the time, where the Church was also the victim of attacks.

After returning to power in 2007, Ortega apologized to the Church “for the mistakes of the past”, despite the attacks returning years later.

In 2018, several temples were also attacked and several priests attacked.

In fact, in some temples, such as the Divina Misericordia church, in Managua, you can still see bullets on their walls from vigilantes who fired for several hours on the night of July 13, 2018 for sheltering several university students who were protesting against Ortega. One died in that attack.

Tensions have also risen to diplomatic levels. Ortega expelled the apostolic nuncio Waldemar Sommertag on March 6 without explaining the reasons.

“The Holy See has received with surprise and pain the communication that the Government of Nicaragua has decided to withdraw the approval (agrément) of His Eminence Monsignor Waldemar Stanislaw Sommertag, Apostolic Nuncio in Managua since 2018, imposing him to immediately leave the country after notifying him that measure,” said a statement issued by the Vatican.

Alias ​​’Figurita’, ‘Sergio’ and a former SPI were provisionally imprisoned for the crime of a Colon model

The Homicide and Femicide Section of the Metropolitan Prosecutor’s Office,

In this context, Ricardo Scavone, Paraguayan ambassador to Spain, said

AFP: Know which affiliates can request the withdrawal of funds today

Attention. Today, Friday, August 19, the members of the AFP

Alias ​​’Figurita’, ‘Sergio’ and a former SPI were provisionally imprisoned for the crime of a Colon model

The National Police, under the direct orders of Daniel Ortega and Rosario Murillo, assaulted the Episcopal

After 15 days under police siege and held in the Episcopal Curia of Matagalpa, the Police

The attack by the Daniel Ortega regime against the Catholic Church has been frontal. The 28-parish

The bubble of Monsignor Sócrates Sándigo in León

Flanked by the flags of Nicaragua, the Sandinista Front, and the Catholic Church, the bishop of