The NMS (National Metereological Service) issued a yellow alert for snowfall and strong winds, as a result of the Zonda wind, which will affect at least 10 provinces, so precautions are recommended.

According to him NMS, the provinces on yellow alert due to Zonda wind are: Tucumán, San Juan, Salta, La Rioja, Jujuy and CatamarcaTherefore, it is recommended to avoid outdoor activities, in addition to protecting roofs and windows.

For its part, in Mendoza, Neuquén and part of Río Negro, there is an alert because there will be low-intensity snowfalls, with accumulated values ​​that could reach 20 to 45 centimeters. 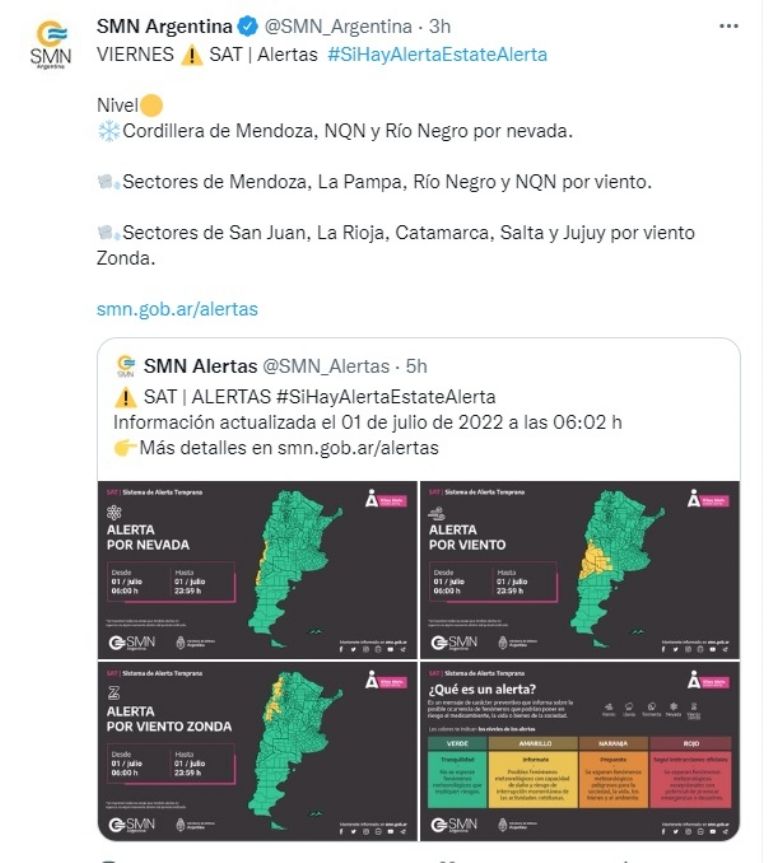 In addition, in Río Negro, the authorities of the Nahuel Huapi National Park requested to travel with extreme caution due to the alert for “intense snowfall”, for which they recommended driving with vehicles suitable for snow.

In case the snowfalls intensify, they recommend to the population: “not to go out and be attentive to the closure of circuits, roads and paths due to the accumulation of snow”.

They also requested “to consult the Argentine Naval Prefecture about the state of the ports and the navigation before going out to sail and to verify the conditions of the vehicle prior to circulating (antifreeze, chains, lights, the height of the car and the path to travel), in addition to be careful in the places of shadows on the routes, since they are an indicator of the presence of black ice”.

Where will the rains be?

Just as there is an alert for snowfall and wind, the organism reported that isolated rains will arrive in the Metropolitan Area of ​​Buenos Airesso a drop in temperature is also expected.

New SMN alert for winds, rains and snowfall: which provinces will be affected

The NMS (National Metereological Service) issued a yellow alert for

1,732 cases of Covid-19 in the country are registered this Friday

The implementation of a new system on the main runway

The Ministry of Health (Minsal) confirmed that there are two

1,732 cases of Covid-19 in the country are registered this Friday

Photo: republica.laplata.gob.ar The Children’s Republic of the city of La Plata, a property with scale public

John of the Cross Kairuz. Illustration by Osvaldo Révora. It is almost a mockery of fate

Argentines won in Santiago and turn on top

Photo: Emilio Rapetti Argentinos Juniors came close to the top of the Professional Soccer League by

The Government advances in negotiations to renew the Care Prices program