The Minister of Agrarian Development and Irrigation, Javier Arce Alvaradoassured that he committed an administrative omission because “in 20 minutes” they made him sign an affidavit that, according to him, has already been corrected before the Presidency of the Council of Ministers (PCM).

In statements to RPP Televisión, the new head of the sector attributed said omission to a “mistake” of his lawyers, although he denied that he had committed the crime of generic falsehood.

“It was a mistake by my lawyers. It is an administrative omission, it is not a crime. Today I have presented the document with the affidavit according to the regulations to the premier”he expressed.

“In 20 minutes they made me sign an affidavit that in one way or another I did not see well, but it is an administrative omission that today I have presented to the PCM”added the head of the Midagri.

LOOK: More than half a million international tourists arrived in Peru in the first five months of the year

In that sense, Arce Alvarado also denied that he is going to resign from the position he assumed on May 22, much less having presented his letter of resignation to the president. peter castle.

“I have not thought about (resigning), what I have thought about is consolidating the true transformation of Peru alongside our farmers, not disappointing the trust of our President of the Republic, who has given me this great responsibility, and I am willing to take on the challenges”he underlined.

In the same way, the head of the Midagri denied having a criminal or judicial record, although he recalled that in 1996 he was denounced for usurpation of functions by a Northern Cone Court, an accusation that was finally filed.

“Certainly, I have the year 96 an acquittal sentence. When I was 26 years old I was the youngest deputy mayor in the country, I denounced a corrupt mayor, an Arab, in the district of Santa Rosa. I was detained for 40 days for usurpation of functions. When I left, the National Elections Jury sought me out so that I could assume the mayor’s office and in the end an acquittal resolution was issued “sentenced.

As is recalled, a report from the Fourth Power program showed a series of documents that would link the new Minister of Agrarian Development and Irrigation, Javier Arce Alvaradowith serious legal issues.

The Sunday newspaper reported that the also Andean parliamentarian would have this condition in the Ninth Liquidating Criminal Court of Lima for the alleged commission of the crime of generic fraud.

Likewise, he became aware of the 20 complaints that exist against Arce at the fiscal level at the headquarters of Ventanilla, Huaura, North Lima, Callao and Arequipa. Five of them are on file and others are pending or formalized for crimes such as illicit association, forgery, fraud, document forgery, concussion, usurpation of functions, aggravated theft and crimes against public faith. 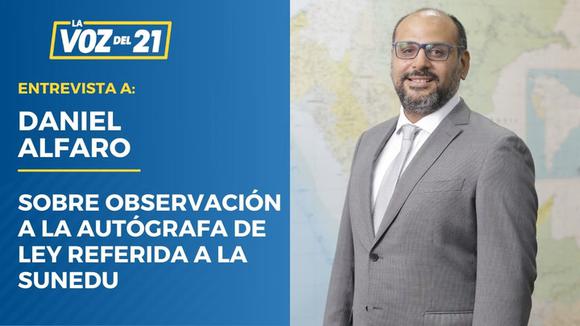 Perú21TV spoke with the former Minister of Education, Daniel Alfaro, about the observation of the law that threatens the university reform and the autonomy of Sunedu.

Minister Javier Arce admits administrative omission: “in 20 minutes they made me sign an affidavit”

The Minister of Agrarian Development and Irrigation, Javier Arce Alvaradoassured

They present an articulation plan for birth registration

The first lady of the Republic, Raquel Arbaje, led the

Second day of cold wave with temperatures down to -4.3°C

This Tuesday began the second day of the cold wave

Maduro highlights tax collection and increased use of the bolivar

Maduro called for those who insist on creating a diatribe

They present an articulation plan for birth registration

On May 26, the Congress of the republic reported a new interpellation motion against the President

An undetermined number of residents of Huancuire (Apurímac), workers of the Las Bambas mining company and

Indecopi: Elimination of bureaucratic barriers allowed savings of more than S/ 48 million in 2021

The Indecopi indicated that during 2021 it promoted the elimination and non-application of 5,843 bureaucratic barriers

Agrarian Commission will summon Minister Arce again for next Tuesday

The Popular Force congresswoman, Vivian Olivos, who chairs the Agrarian Commission, announced that the head of

The Vice President of the Republic, Dina Boluartesigned in October 2021 documents as a representative of