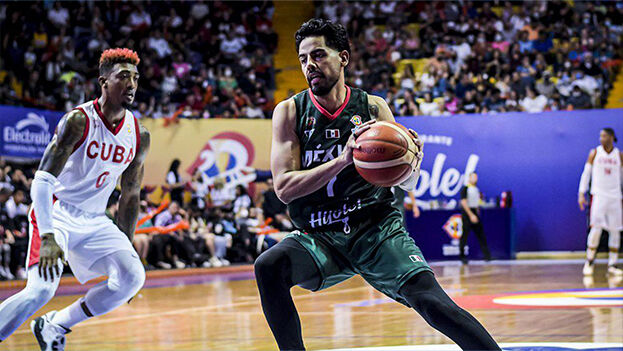 (EFE).- The Mexican team beat Cuba 75-66 this Friday, with which they established themselves in second place in group D of the first round of the Americas qualifiers for the 2023 World Cup.

The result kept the Mexicans, already with the ticket to the second round, in second place in their sector with 4 wins and one loss, the same mark as the leader United States, which boasts a better production of points.

Mexico, at the Manuel Bernardo Aguirre gym in Chihuahua, in the north of the country, won 18-16 in a tight first quarter, thanks to winning on the counterattacks against some Cubans who showed strength in the paint.

The difference was made in the field goals, in which the best of the Mexicans was the veteran Francisco ‘Pako’ Cruz, who converted two of his three attempts, one of them a triple that helped him lead his team with five points in the first period.

The Mexicans left at halftime with a 42-36 lead with another good performance from Cruz, who added eight more points to his tally to reach 13 units.

The guard of the Turkish Tofas continued with the fine aim in the shots of three and made two more in three attempts in the second quarter against a Cuba that lost the strength in the paint.

Mexico had a double-digit lead for the first time in a third quarter in which the Cubans were condemned with their turnovers, which meant 10 points for the locals.

Gabriel Girón took center stage for the Mexicans with eight points, six of them from the triple.

Although the Cubans reduced the deficit, Paul Stoll completed a final quarter of five points to help the Mexicans define the match 75-66.

Stoll was the best scorer for Mexico with 17 points, for Cuba, last in group d with five losses in the same number of duels, the leader was Jasiel Rivero also with 17 units.

The Mexicans will close their participation in the first round of the qualifiers by visiting Puerto Rico on Monday at the Roberto Clemente Coliseum.

Neighborhood tour of Iztacalco Isabel, a 61-year-old resident of the

Senacsa reported the results of the first semester. Photo: IP

Walter Albán on the new Minister of the Interior: “No one with the profile will accept the position”

Cuba under the table: "shortage"

In this fourth episode, the shortage in Cuba is addressed: Guests: Luz Escobar, independent journalist and

(EFE).- The Cuban Institute of Meteorology issued this Friday the first tropical cyclone warning before the

I live in Taguayabón, near Camajuaní, in Villa Clara, and for months I have been waiting

Authorities at the Zozaya immigration station in Guadalupe, located in the Mexican state of Nuevo León,

After 26 days without news of José Daniel Ferrer, leader of the Patriotic Union of Cuba