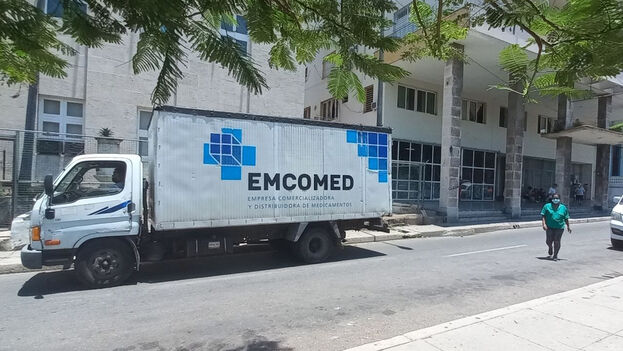 Two months after the president of the state-owned business group BioCubaFarma, Eduardo Martínez, acknowledged that there were shortages in the basic list of medicines and that out of 627 products “369 are currently produced,” the official newspaper Granma published this Monday that Cuba is developing a vaccine against the omicron variant of the SARS-Cov-2 coronavirus.

While Martínez announces that the vaccine candidate, which has been produced at the laboratory level by the Cuban biopharmaceutical industry, is ready to start the process of preclinical and clinical trials in humans, the shortage of medicines persists in pharmacies.

Since last April they are missing 143 drugs in one or more provinces. According to what Martínez declared last May, this is due to the unavailability of raw materials and necessary materials (94%) and plant shutdowns due to breakage or maintenance (6%).

It should be added that the Abdala, Soberana 02 and Soberana Plus vaccines have not yet received the endorsement of the World Health Organization as an alternative against the coronavirus. Without this certification, the Cuban government has marketed these products among its partners Venezuela, Nicaragua, Vietnam and will soon send doses to Mexico.

Martínez announces that the vaccine candidate, which has been produced at the laboratory level by the Cuban biopharmaceutical industry, is ready to start the process of preclinical and clinical trials in humans.

The lack of a WHO endorsement for Cuban antigens has significantly hampered travel from the island, because many countries, such as the United States, require the complete guideline of a vaccine recognized by that international organization to board a flight to their territory.

Martínez explained that the BA.5 subvariant of the omicron variant of the virus has caused a new outbreak of covid-19 in the world, and an increasing trend in positive cases in Cuba in recent weeks. At the close of Sunday, 103 daily cases were reportedbeing Holguín (15), Guantánamo (15) and Havana (14) the regions of the country with the most reported cases.

Although he insisted that they maintain “control” of the disease due to the high vaccination rates with their own anticovid formulas that reach almost 98% of the population considered “vaccinable”, the reestablishment of some preventive measures was announced. Martínez also mentioned “the decision to reinforce with another dose.”

He also indicated that the immunity of around 6,000 Cubans, to whom the Cuban doses were applied, has been studied. Abadala, Soberana 02 and Soberana Plus have been applied to almost all of the 11.1 million inhabitants of the Caribbean country, while more than 7.4 million have booster doses.

Two months after the president of the state-owned business group

According to reports from various international agencies, the armed conflict

President of CABEI advocates Ortega’s dictatorship: “There is an unfair sanctions regime”

The president of the Central American Bank for Economic Integration

99,430 appointments have been lost in these 3 weeks of closures

The Electronic Health Information System (SEIS) of the Ministry of

A warehouse destined to store fodder was used by coyotes as a hiding place for migrants.

On the eve of July 26, the date of celebration of the Cuban regime, and with

Beatriz Napoles Morales, the young woman who disappeared in Mayabeque, is found lifeless

This Saturday afternoon, the lifeless body of Beatriz Nápoles Morales, the young disappeared on July 14.

Cuba ends its performance in the World Athletics Championships without medals

The athlete delegation will return to Cuba without any medals. The last opportunity to get a

Mexico and the US return another group of Cuban migrants

The Government of Mexico became the Border Patrol of the United States: Detain and expel, says