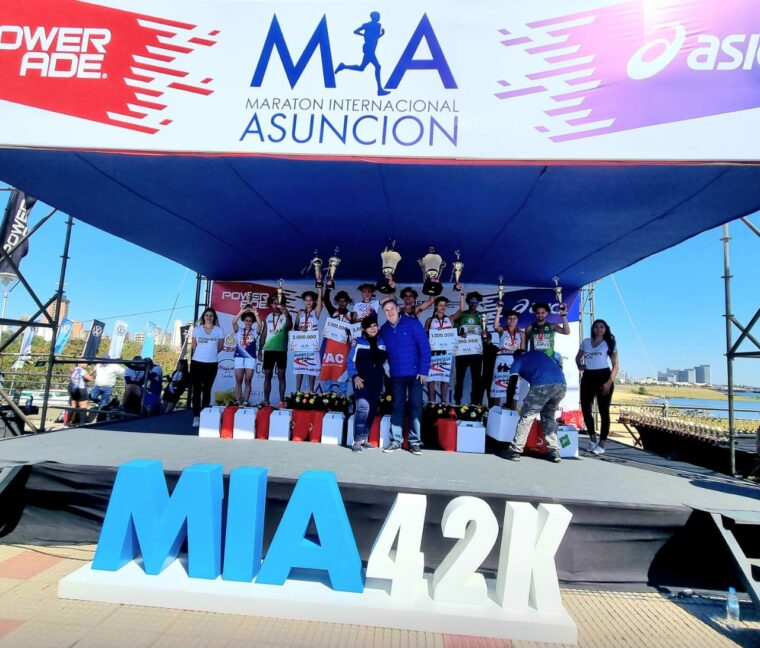 While among the women the winner was María Leticia Añasco with a time of 3:05:21, being escorted by Rebeca María Núñez with 3:17:48 and third place went to Nathalie Vanessa with 3:19:09.

Regarding the Half Marathon (21,097 km), the winner in the men’s category was Edelson de Ávila Almeida after crossing the finish line with a time of 1:10:45; while in women the highlight was Liz Chaparro with a time of 1:24:26.

While in the 5 kilometers, in the men’s race, Bruno Ariel Colman climbed to the top of the podium, his time was 16:29, and in the women’s, the winner was Janine Rodríguez with 18:24.

Categories were also enabled that ranged from 19 years to 99 years in men, while in women there were categories from 15 to 29 years to 50 to 54 years.

At the end of this great festival of Paraguayan running that took place with great success basically in the Costanera de Asunción, which was the point of departure and arrival, the corresponding award ceremony was held, the award ceremony was in charge of the honoree Paulo Reichardt , promoter of this event in our country from his position as Minister of Sports, a position he held from March 2009 to June 2012.

The entrance Marathon “Tribute to Paulo Reichardt” was a great party on the Costanera de Asunción was first published in diary TODAY.

Nathaly Alcantara, civil servant whose name appeared in the committees

The Public Ministry requested the imposition of preventive detention against

Dollar today: this is how the BROU board opened this Friday 19

The dollar opened the day this Friday, August 19, with

“House of Dragon”: A new Khalessi for the new “Game of Thrones”

Fantastic creatures, sex, violence, power struggles, betrayals, and a new Khaleesi. The best and most discussed