The senator and leader of the Cabildo Abierto (CA) party, Guido Manini Riosstated that the decree of President Luis Lacalle Pou, which made the packaging of tobacco packs more flexible (allowing cheaper soft boxes and the presence of designer logos), is “an inopportune decree” because “if the spirit is merely one of control of smuggling, he could have waited another month for the decree.”

“If we agree on something in Cabildo Abierto, it is that anti-smoking policies were one of the best things that were done in the administrations of the Front,” said the legislator, who belongs to the same space from which the current Minister of Public Health, Daniel Salinas, came out. .

Manini Ríos clarified that Minister Salinas “does not plan any (additional) change in anti-smoking policies”, beyond what is contemplated in the Lacalle decree. 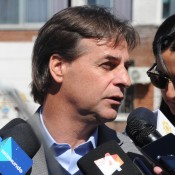 Lacalle Pou: relaxation of anti-smoking regulations was made at the request of the industry

The president assures that he has heard “a number of nonsense” about it and, act …

At the beginning of the week, Manini Ríos had publicly declared that the MSP minister “didn’t even sign” the decree.

He hastened to say that, for him, the controversy of this whole matter “should not affect in the least” Salinas’s intentions to be elected as president of the Pan American Health Organization (PAHO).

“After the government decree, it is expected that tobacco consumption will increase among the youngest”

LARED21 interview with Gustavo Soñora, director in Latin America for the Department of…

Manini Ríos: the Broad Front’s anti-tobacco measures were “the best” and flexibility is “inopportune”

“We are facing a clear case of prevarication,” denounced the

Petrobras announced today (22) a further reduction in the sale

The Minister of the Interior, Luis Alberto Heber, participated on the night of this Thursday 22

The secretary of the Presidency of the Republic, Álvaro Delgado, participated in the ceremony, which also

Deputy Reisch: Bill that establishes as a crime all mistreatment of older adults

If the initiative is approved, these acts will be punished with 6 months to 3 years

Dollar today: this is the price of Friday, September 23 according to the BROU

The dollar opened this session on Friday 23 with a value of $39.45 to buy and

Weather in Montevideo today: what is the weather forecast for September 23, according to Inumet

Weather in Montevideo today: what is the weather forecast for September 23, according to Inumet National