The senator for the Cabildo Abierto party, Guido Manini Ríos, visited the headquarters of the PIT-CNT, on Juan D. Jackson street, where they exchanged opinions and ideas on salary recovery, since the popular sectors understand that the strong inflation that It has been attacking the pockets of Uruguayans and causing a loss of purchasing power.

“There were points of coincidence. We all want the purchasing power of the workers not to fall and that the food basket does not rise any more”, said Manini at a press conference as he left the union headquarters.

“There are proposals from the PIT-CNT with which we agree. We cannot allow the purchasing power of workers and Uruguayans in general to deteriorate. We agree”, added the leading legislator of the ultra-conservative party.

He also clarified that “surely there will be some coincidences with the Economy authorities.”

raise wages to deal with inflation

Manini Ríos was in agreement with a proposal from the PIT-CNT, which seeks to increase salaries and pensions to face inflation.

“We believe that we have to raise the pension and the minimum wage, but we have to be serious in our proposals,” reflected Manini in this regard.

At the beginning of April, the Consumer Price Index (CPI) in March had another rise of 1.11% in March and closed the year-on-year (from March 2021 to March 2022) at 9.38%, according to data from the National Institute of Statistics (INE). 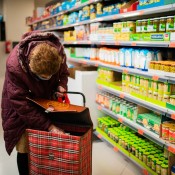 Inflation rose again: it was 9.38% year-on-year in March

15 Venezuelans are victims of human trafficking in Colombia

“The Ombudsman’s Office attended, accompanied and activated the protection route

The creation of the Social Action and Public Health commissions

through the “Manitos Program”, the Santa Cruz Mercantile Foundation –

15 Venezuelans are victims of human trafficking in Colombia

The countries with the best work-life balance

The man responsible for the murder of his children was arrested

The lockdowns in China are having a major impact on congestion outside the country’s ports, as

This Sunday On May 1, services such as supermarkets, shopping and transportation will be reduced in