The recent protests demanding new elections and the closure of Congress have led to innumerable clashes with the Police and the Army, clashes that have left at least 27 dead so far.

At the national level, thousands of Peruvians have taken to the streets to show their dissatisfaction with the government on duty, however, many vandals have infiltrated they caused excesses, destruction and outrages against public and private property.

These acts of violence were not unrelated in Cusco, where video surveillance cameras and private individuals, They captured a man allegedly participating in several riots and excesses. According to the images, the subject was in front of the protesters, attacking cars or committing a crime.

Thus, after several days of searching, the Police managed to find the whereabouts of Dario Quispe (24), accused of the crimes of riots, aggravated vandalism and others, in addition to alleged attacks against citizens JIGSD (24) and GQC (24).

In the pretrial detention hearing, held last Tuesday, the judge of the Seventh Criminal Court of Preliminary Investigation of Cusco, Alex León, ordered nine months of preventive detention against the accused, the same person who was transferred to the Qenccoro prison, where he will be investigated for his alleged crimes. 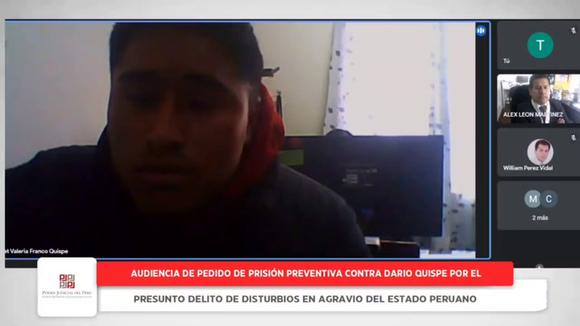 At the hearing, the defendant burst into tears, apologizing for what he had done and did not deny his participation in the facts against him. “First of all I’m sorry for the things I’ve done, I’ll never do them again, And I’ve never done them before.”he pointed.

The man in question, who appeared in the videos wearing camouflaged clothing, is accused of participating in attacks on private vehicles on Avenida La Cultura, as well as causing injuries to the face of a young cell phone salesman, who he headbutted, in addition to threatening to explode a gas cylinder, all these accusations were recorded in photos and videos.

– The crime of disturbances is contemplated in Article 315 of the Penal Code, and is punishable by a penalty of not less than six nor more than eight years of imprisonment.

Parliament of Taiwan ends the Free Trade Agreement with Nicaragua

Taiwan legislators formalized the end of the Free Trade Agreement

Analyst affirms that voters are not interested in corruption when voting