Lawyer Lucas Gersi affirms that the official initiative to call a Constituent Assembly would open the doors to a dictatorship in Peru. The way out of the crisis, he says, is urgent, but he warns that it no longer passes only through the way out of peter castle of the Presidency, but by calling general elections.

The president will send a project to Congress so that citizens can be consulted if they want a Constituent Assembly (AC). Its viable?

It would be the fourth or fifth project in that sense and it is most likely that Congress will not approve it. With this, it is totally distorted that the government did not promote the Constituent Assembly, that it had abandoned that position; that is totally false and it is obvious that he promotes the Assembly to obtain absolute power and install a dictatorship. We have to be very careful because a self-coup could be committed.

Peru Libre has also presented a project to call a Constituent Assembly.

The risk is not that Peru Libre organizes the Constituent Assembly following the parliamentary route, but rather that it imposes it by force through an extra-parliamentary route (…) that a self-coup occurs and that Congress is closed in an unconstitutional manner.

Lucas Ghersi: “The Assembly is the gateway to a dictatorship” #Interview We spoke with the lawyer Lucas Ghersi who affirms that Parliament is “Pedro Castillo’s accomplice by prolonging the inertia in which the country finds itself”. This is #LaVozDel21 on #P21TV

How do you think that self-coup strategy is being designed?

The bill blames the 1993 Constitution for the increase in poverty…

There have been great improvements in Peru during the validity of the 1993 Constitution. Not only has the Gross Domestic Product increased, but poverty and inequality have been reduced, and Peru has progressed. That does not mean that the Constitution is perfect. Surely there are things to change in the political regime, but the reforms are partially debated because that way we can weigh the pros and cons. The AC is not good for debating reforms because it has absolute power, because it debates everything at the same time, because it lends itself to manipulation. This proposal is the gateway to a dictatorship.

How do you see the role of Congress in carrying out those partial reforms that are necessary?

There are good congressmen but, in general, this Congress does not seem to have the will to defuse the political crisis. I perceive a Congress that prefers the status quo to be maintained because it knows that if the crisis is resolved and the elections are brought forward, its parliamentary term would be shortened, they prefer to pretend that Peru is not in such a big crisis, but right now the The crisis we find ourselves in is deadly and if Congress does not give us a solution, it is very likely that we will enter a dictatorship. Congress, at this moment, is no longer part of the solution, it is part of the problem because it is acting almost as if it were an accomplice of Pedro Castillo by prolonging the inertia in which the country finds itself. (…). As long as Castillo remains president, democracy in our country is in mortal danger. I do believe that he has to leave the Presidency, Dina Boluarte too, either due to resignation or vacancy, and in that case what corresponds is that general elections be called and we could return to normality as a country. 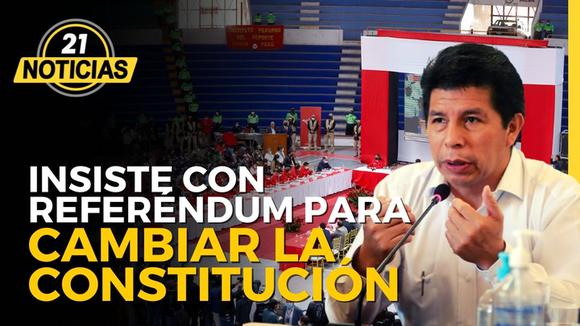 PEDRO CASTILLO fulfills the wishes of VLADIMIR CERRÓN From Cusco, PEDRO CASTILLO will seek a REFERENDUM in the next regional elections to CHANGE THE CONSTITUTION. We spoke with the former president of the Constitutional Court, Ernesto Álvarez. We analyze the president’s proposal with the constitutionalist Carlos Hakansson. We spoke with former Minister of Justice Marisol Pérez Tello.

The plastic containers that were not used for the oil,

The plastic containers that were not used for the oil,

On December 14, the Senate of the Republic approved changes

The Panama Jazz Festival, the largest event of the Danilo