IPAE Business Association recognized Carlos Neuhaus Tudela as the “entrepreneur of the year” in its recent edition of the #PremioIPAE2022. The business leader received this award for his outstanding career as manager of various industries, as well as for carrying out important public and private projects that have contributed positively to certain sectors of the country, such as sports and commercial development.

“The State, practically in all its instances, has become the main obstacle for Peru to grow and eliminate poverty, hunger and ignorance. Even worse when friends, co-religionists, characters with a shady past and relatives are hired to live off the budget of the Republic”Neuhaus said in his acceptance speech.

Carlos Neuhaus is remembered for being one of the architects of the successful holding of the LIMA 2019 Pan American and Parapan American Games, during which he served as president of the organizing committee. At the end of 2016, he assumed the mission of planning and executing the international sports competition, which meant the important challenge of achieving the objective in a short period of time. The result achieved was a sports festival that stood out for its high-level organization, to the point of being considered the ‘Best Games in History’ on the continent.

LOOK: Sunafil: Is a new takeover of a state entity approaching?

“We have been fighting for time so that public servants are capable, honest and mystical people. Unfortunately, many of those I knew in the state administration have already retired of their own free will or were dismissed to be replaced by people who in most cases are a danger to the national treasury”, highlighted the prominent businessman.

Carlos Neuhaus has left behind a new public management model that is being replicated in other State agencies and in other successful projects in the private sector. Thanks to this, he has been recognized by various institutions; He has received the award for the best alumnus of 2016 from the Thunderbird Global School of Management for the program that was carried out to train one hundred thousand women micro-entrepreneurs in Peru. He has also been decorated with the Grand Cross of the Order of the Sun, the highest distinctions of the Municipality of Lima, the Joint Command of the Armed Forces, the Peruvian Navy, the municipalities of Surquillo and San Miguel, among others. .

LOOK: Vladimir Cerrón meets with Castillo to talk about the breakup of the bench

“We do not want bosses in the ministries who take advantage of their small share of power to create obstacles for the micro entrepreneur who wishes to formalize his enterprise. We do not want those who collude with the land trafficker to profit from poverty. We do not want those who mistreat the elderly, people with disabilities or different abilities, those who discriminate on the basis of race, gender, religious or political creed. We do not want insensitive, short-term and mediocre bureaucrats who save their seats in the state apparatus without corresponding with those of us who pay their salaries with our taxes. We do not want the lie as a banner of public action”, pronounced Carlos Neuhaus, who also formed the remembered group of independent professionals called Vaccine Command. 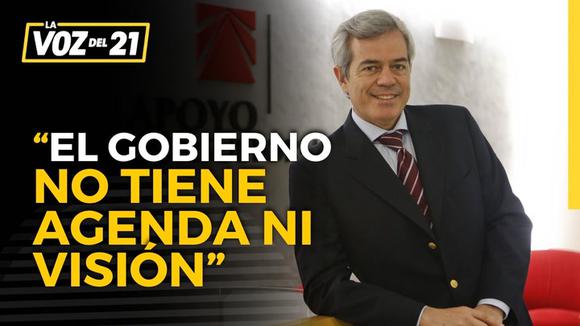 Perú21TV spoke with the economist and executive president of Apoyo Consultoría who says that the greatest deterioration in public management is observed in the Ministry of Energy and Mines and in the MTC.

Less than a year after the purchase of Apple Leisure

The Minister of Livestock, Agriculture and Fisheries, Fernando Mattos, and

The President of the Republic, Nicolás Maduro, recognized this Friday

Law is promulgated that declares the industrialization, commercialization and export of citrus fruits of national interest

Updated on 05/27/2022 08:26 am The prosecution opened a preliminary investigation against the president’s wife peter