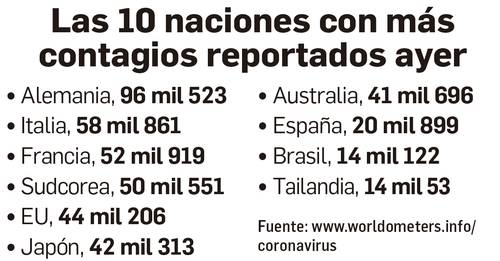 Washington. The United States reported 61,817 new coronavirus positives and 266 associated deaths in the last 24 hours, according to data from the Centers for Disease Control and Prevention (CDC).

The North American country, the hardest hit by the covid-19 crisis in the world, accumulates, according to official statistics, 81 million 94 thousand 164 confirmed positive cases, almost a quarter of the population.

The CDC also reported the death of another 266 people in one day, bringing the number of deaths to 990,527. The United States is the nation with the most deaths from covid-19.

In Germany, another 101,610 new coronavirus positives were confirmed in the last 24 hours, according to the balance of the Robert Koch Institute published yesterday.

Since the start of the pandemic, the total number of infected has risen to 24,710,769, the worst figure in the European Union after France, despite the high vaccination rate.

The institution also reported the death of another 214 people, raising the number of deaths from the disease to 135,292.

As many as 12.38 million Shanghai residents, nearly half the population of China’s financial hub, are now in lower-risk areas, meaning they can leave their homes, the government said yesterday.

Shanghai, battling the biggest Covid-19 outbreak in China’s history, placed the entire city under lockdown earlier this month, though it has cautiously lifted some restrictions on residential areas that have gone two weeks without a positive case.

The city classifies each dwelling according to three levels of risk and designates as prevention zones those who have not seen a positive case of covid-19 for 14 days, allowing residents to go out for activities appropriate.

As of Thursday, the number of people living in the sealed and controlled areas of high risk, subject to the strictest confinement measures, was 5.27 million, which represents a decrease of 6.6 million since the last adjustment on April 20.

Another 5.93 million medium-risk residents can, in principle, leave their apartments, but remain confined to the compounds.

The government said 52 people died from coronavirus on the last day of April 28, up from 47 the day before. The average age of the deceased was 84 years.

Italy, Bulgaria and South Korea began to relax restrictions. The global balance of the pandemic is 512 billion 851 thousand 584 infections and 6 million 233 thousand 353 deaths, according to Johns Hopkins University.

The future head of the Santa Fe Supreme Court analyzed

BC: public accounts close November with a negative balance of BRL 20 billion

Public accounts closed November with a negative result of R$

Cuba parades again on May Day after two years of pandemic

Accountability, Esquivel’s offer for the presidency of the Court

“To the university people of this House of Studies, who participated as authors, jury or adviser,