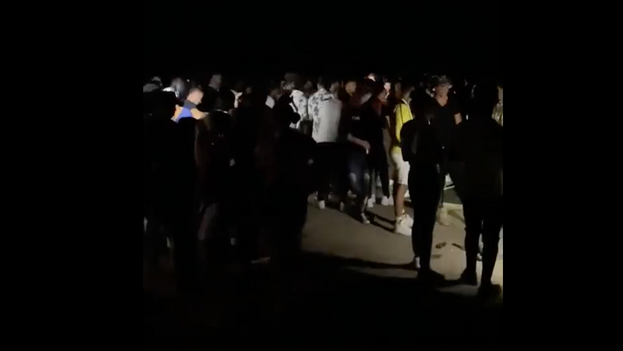 Block 5 of the Nuevitas thermoelectric plant, in Camagüey, left the electrical system a few hours after being incorporated. The official journalist Lázaro Manuel Alonso confirmed the news through his Facebook account and warned of the increase in the energy deficit that the new incident would entail.

“That unit synchronized yesterday night,” the reporter recalled, adding that “the causes of what happened are being investigated.”

Unit 5 of Nuevitas, which had been out of service the previous days due to a breakdown, as well as unit 4 of the same plant, was synchronized on Saturday during peak hours, as announced by the Electric Union of Cuba. But the relative joy did not last even a day and the 105 MW generated by that block are lost again.

For this Sunday’s peak, the state company had forecast a 20% deficit in generation, but the problem in Nuevitas worsened overnight and the population took to the streets again

For this Sunday’s peak, the state-owned company had forecast a 20% deficit in generation, but the problem in Nuevitas worsened overnight and the population took to the streets again. Several videos posted on Facebook register a protest in the city of Camagüey where the slogan “turn on the current, pinga” was heard again, which was born in the same province, when the residents of the university campus exploded after more than 10 hours without electricity and hardly any water.

Social networks are also serving as a thermometer to measure the state of a population that is more than tired of the power outages they are suffering this summer. “Those of Minas, Camagüey, have been turned off since before 5pm and nothing. This is until dawn that I abuse with this heat and mosquitoes,” commented a user well into the night.

“In Santa Cruz del Norte, Mayabeque, also a tremendous mongrel for 6 hours and nothing at all. Nobody goes out to protest,” added another. “I am from Santiago de Cuba and my children are desperate and crying with the heat and the mosquitoes,” said a mother. “We have been turned off in Cienfuegos since this morning. All pa’ outside,” claimed another. The messages arrive from all the provinces and the discomfort is enormous.

Meanwhile, in the same Camagüey where citizens cannot sleep, the reopening of the Valentín Cayo Cruz hotel has just been announced, a luxury resort located in the north of the province, on an islet of just 26 square kilometers. The establishment, managed by the Spanish hotel company Iberostar, is once again receiving clients with the arrival of the high season, on November 1st.

The establishment, managed by the Spanish hotel company Iberostar, will once again receive clients with the arrival of the high season, on November 1

The five-star hotel has 546 rooms on an all-inclusive basis and is for adults only. According to Radio Cadena Agramonte, the space “is part of the tourism development carried out in this important destination, and recreational, cultural, gastronomic and sports proposals are added to the contemporary design, always taking advantage of the benefits of the beach and the identity values ​​of the island”.

The Ministry of Tourism has planned in the Jardines del Rey archipelago, to which Cayo Cruz belongs, the largest hotel project in the country, with more than 20,000 rooms, despite the warnings of several economists about the pessimistic prospects of a sector that was, before of the pandemic, the third generator of foreign exchange after the sale of medical services and remittances.

In Camagüey, another protest against blackouts while more luxury hotels are announced

Block 5 of the Nuevitas thermoelectric plant, in Camagüey, left

L the threats against Mexico from its partners of the

The movement of earth for the construction of the Chinchero

The residents of Bauta, Jagüey Grande and Covadonga protest in the streets due to the long blackouts

At least three protests, in different provinces of the country, took place this Saturday night demanding

What started as a rumor has finally been confirmed. Yipsi Moreno has resigned from her position

Felton, the largest power plant in Cuba, closes again due to a breakdown

The Felton thermoelectric plant, located in Mayarí (Holguín), has once again become a factor of tension

The Cuban Ministry of Public Health detected 4,776 reactive cases of dengue in the third week