The administration of Horacio Rodriguez Larreta it tightened the requirements so that the most vulnerable families receive support from the State through different social plans.

As reported the head of government porteño, there will be greater restrictions to grant the certificate of regularity of the students and, according to what he assured Horacio Rodriguez Larretano student can accumulate more than 25 total annual absences.

In this sense, those who do not meet the assistance criteria and are beneficiaries of the “Ciudadanía Porteña” social program will be removed from the social plan. This, since, as argued Horacio Rodriguez Larreta, “children have to be in school and social policy has to align incentives to achieve it”.

In accordance with the provisions, the certificate of regularity will only be granted to those students who attend a minimum of 85% of the days of class during each two-month period of the current school year. 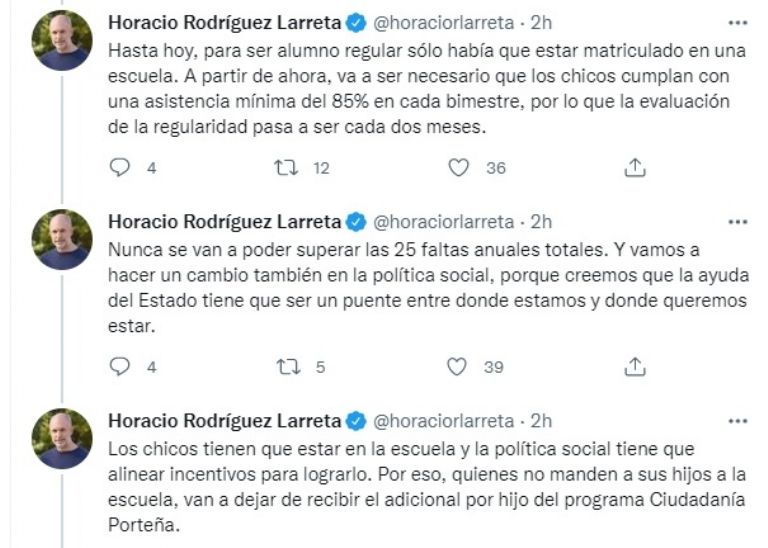 In this regard, the chief of staff of the Buenos Aires government, Felipe Miguel, said that “it is not about punishing or excluding, but about appealing to the responsibility of parents and guaranteeing that the children attend class every day.”

The measure came into force as of August 1 and reaches students at the initial, primary and secondary levels and, although in principle it only impacts the social aid granted by the City, it could also affect those provided by the Nation, since that the certificate is required to receive the Universal Child Allowance (AUH).

With this decision, the Government of Buenos Aires aims to maintain schooling levels and that there is no school dropout; also, control the conditions under which social plan payments are granted and maintained.

What will happen to students who have absences

As reported the head of government Buenos Aires, when there are continuous absences with a student, the case will go to the Ministry of Human Development to analyze each situation in particular.

But, “if after all this effort, it doesn’t change and the kids still don’t go to school, after three months, the additional component will be cancelled. And, if after six months, they don’t return to the classroom either, the entire plan will be suspended,” said the president.

The administration of Horacio Rodriguez Larreta it tightened the requirements

Independiente Del Valle is a semifinalist in the South American; thrashed Deportivo Táchira 4-1

Flamengo asserted the advantage of playing at home and defeated

The Unitary Central of Workers, (CUT) supported the government program

Independiente Del Valle is a semifinalist in the South American; thrashed Deportivo Táchira 4-1

Movies: "A different Argentina cannot be conceived without the contribution of the social sciences"

(Photo: Alejandro Santa Cruz) The Minister of Science and Technology, Daniel Filmus, stressed this Tuesday that

Last month it was debated in Deputies (Deputies Press Archive Photo). The bill that establishes investment

(Photo: Télam Archive) President Alberto Fernandez will lead this Wednesday, in the Buenos Aires city of

Recoleta: they dismantled a laboratory that unlocked stolen cell phones

Illustrative image. Photo: file. A laboratory that unlocked stolen cell phones to sell them again was

Yesterday, workers from Argentinian airlines grouped in the Association of Airline Pilots (APLA), held a union