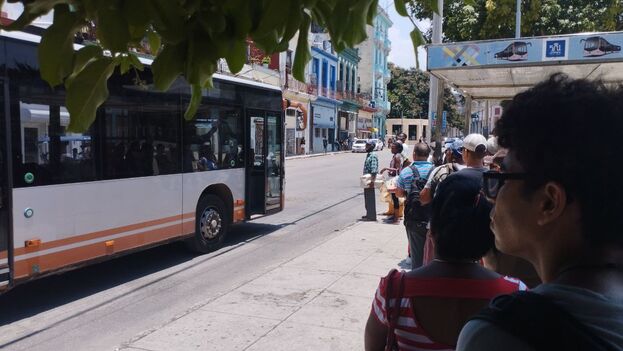 The provincial transport company of Havana affirmed that the Belgian buses will improve their air conditioning system. Barely half an hour had passed since 14ymedio published a chronicle recounting the trip made by one of our reporters and in which he confirmed that the oppressive heat in the vehicles was not an unfounded rumor circulating on social networks, the authorities issued the informative note notifying of upcoming changes.

The message states that “despite not knowing basic elements of the operation of these teams, on July 4 the operation of 5 articulated buses began on route P12 and 5 rigid buses on route P16.” However, he maintains that the problem of air conditioning “had already been identified previously”.

To solve the problem, “work is being done on the coupling of windows of the disarmament buses. It is intended to change 3 windows to the rigid cars and 5 to the articulated ones; in addition to the current ventilation system,” details the note, reproduced by the official press.

It is not clear what “the current ventilation system” is, as some users suspect that the air conditioning has been switched off to save fuel.

The company points out that the poor transportation situation is what motivated the rapid start-up of the vehicles while at the same time adapting to the island’s climate. “The air conditioning that they have does not withstand the high temperatures of the country,” specifies the information, a statement that has generated discomfort among users who know the buses in many cities in the world in which high temperatures are reached without the air conditioning stopping working.

“That the air doesn’t get cold because of the heat in Cuba? As if temperatures in Belgium didn’t reach almost 40 degrees… And the buses don’t stop there, they make direct trips? Like the Yutones?”

“Here in New York the buses stop at every stop and that’s not why they lose the air conditioning, please invent something else,” says a user on Facebook. The company had disdained the previous opinions arguing, moreover, that the opening and closing of doors reduces the effectiveness of the air conditioning, a fact that is not entirely accurate. “That the air does not cool down because of the heat it is in Cuba? As if in Belgium the temperatures did not reach almost 40 degrees… And there the buses do not stop, they make direct trips? Like the Yutones?”, reacted another .

The company took the opportunity to explain that, when the air conditioning problems have been resolved, more equipment will be incorporated, “up to 16 in operation; 9 on line P12 and 7 on line P16”.

The buses were manufactured in 2007 and, although “they have been in operation for 14 years”, they are well preserved and have “a high technological level”, they have presented technical faults, which “they are working on solving”, they explain.

The 29 buses arrived in the Cuban capital on June 24 and were received by Luis Carlos Góngora, vice president of the Provincial Administration Council of Havana, and the Belgian ambassador, Jean-Jaques Bastien, who were photographed next to the flag of the European country.

The operation began this Monday and the complaints multiplied rapidly through the networks. Passengers complained that, through the grille, the air that came out was soft and hot, as if the system was in ventilation mode and not cooling. “These buses are not for here,” some travelers repeated this Tuesday, probably oblivious to the fact that, in most countries that have air-conditioned vehicles, it fulfills the function for which it has been designed. Although on the street temperatures exceed 40 degrees.

The provincial transport company of Havana affirmed that the Belgian

The highest number of cases reported in the last month

Bertha Valle: I want to see Felix in person, photos are not proof of life

After the Russian invasion of Ukraine, Yuriy Makeyev was left

Five months in Tapachula for a safe-conduct, a Cuban from Cienfuegos despairs

José Luis has been in the city of Tapachula, in the border state of Chiapas with

The Cuban Foreign Ministry reacted this Monday, more than a week late, to the European Union’s

Aerolineas Argentinas reopened its connection between Buenos Aires and Havana this Monday, as they had announced

A group of 12 Cuban doctors arrived in the Maldives this Sunday, to join the 16

They find the body of Professor Santiago Morgado, disappeared in Sancti Spíritus, in a well

Professor Santiago Morgado, who had been missing in Sancti Spíritus since last Friday, was found dead