Gurméndez declared as a witness for the construction of the Antel Arena: “There was little crystallinity and transparency”

“They did not take due care of public money,” said the current president of Antel 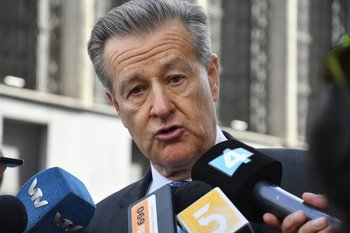 The current president of Antel Gabriel Gurméndez testified this Friday as a witness in the framework of the criminal complaint before the prosecutor’s office investigating alleged irregularities in the construction of the Antel Arena complex.

Although Gurméndez said that he cannot give details about what he declared, he questioned how the scenario was set up.

“Here there has been a systematic action outside of Antel’s legal duties, by authorities that did not take due care of public money, which cost us Uruguayans around US$120 million,” he commented.

Gurméndez said that the entire construction process was developed with “little crystallinity and transparency” to the processes. He commented that all the observations of the Court of Accounts were ignored. “The questions of the legislators were not answered,” he commented.

The current president of Antel said that the construction was carried out through direct contracts and not through tenders. “It became the exception to the norm, in files that are incomplete,” he added.

“There has been damage to the administration,” he commented.

When the data was presented auditIn December 2020, Antel reported that the final cost of the work was US$118 million. That amount is almost triple what Carolina Cosse had reported in 2013 – when she was president of the state company.

To continue with your purchase,
login is required.

Enjoy The Observer. Access news from any device and receive headlines by email according to the interests you choose.

Thanks for signing up.

I chose your plan

You are about to reach the limit of notes.

You have 3 free notes left.

This is your last free note.

You have reached the limit of free notes.

If you are already a Member subscriber, log in here

TSJ presented the results of the Technological Diagnosis of Judicial Processes

"We do not see any type of alteration": Cipriani ruled out failures in attention to O’Neill

“We do not see any type of alteration”: Cipriani ruled out failures in care that O’Neill

Photo courtesy of Public Media. The Uruguayan economist, Eduardo Ache, will be the new president of