All the documentation related to the cargo of cigarettes transported to Aruba by the air freight company Emtrasur had already been sent by Tabacalera del Este SA to the Public Ministry on July 8, 2022. In the delivered folder are the emails, the invoices of the operations carried out and the amounts transferred via the National Development Bank. There is no cloned invoice, but a rectification of invoice No. 640, since initially the shipment would be made by sea, but the buyer clarifies via email that he obtained air freight, therefore the content of the same invoice was modified which is the only one that was presented at Customs in our country. There are also no differences in amounts in the transfers, the government erroneously presents amounts of payments for other charges that differ from the charge of invoice 640 whose amount is US$ 777,444.

On July 8 of this year, Tabacalera del Este SA sent the prosecutor Osmar Legal all the documentation related to the cargo that the Emtrasur company transported to Aruba. On that occasion, several documents were delivered, among them, the famous invoice No. 640 dated 05/11/2022, in addition to the packing list, the export clearance of the air shipment, the bank transfers, the record of the Senad in the that the merchandise is inspected, also a public deed that is the verification of the mail exchanged between the seller and the buyer.

If both the National Customs Directorate, Seprelad or the Anticorruption Ministry resorted to the source (Tabesa), before airing the biased and manipulated information, as they did on Friday at the press conference, they could have avoided the embarrassing spectacle already offered that all supporting documentation is at hand confirming that there is no irregularity in the transactions carried out with the buyer of Aruban cigarettes.

Customs clearance No. 22013ECO100000SP was generated as a result of the export for sale of cigarettes made by Tabacalera del Este SA to the client Tabacos USA Inc, who in turn sold the cargo to its client Tabacal Free Zone NV of Aruba. Therefore, the legal entity that carried out the purchase operation of the tobacco load of Tabacalera del Este SA, which was exported according to the office in question, was Tabacos USA Inc, a company incorporated and in force under the legislation of the State of Delaware, United States of America, with address in Pennsylvania, City of Easton Country, 4500 Willian Penn Higway, USA with contact 610-438-2005.

The Tabacalera del Este SA company has been exporting to the Caribbean for several years and cargo shipments have always been by river and sea, but the pandemic caused logistics problems, so due to the shortage of containers and so that at destination there are no shortage, the end customer (Tabacal Free Zone NV) decided to use an air shipment, so they communicated their decision by email and requested that the international trade term be Incoterms FCA1 Minga Guazú – Guaraní Airport.

In this context, Tabacal Free Zone NV became responsible for the freight and was in charge of contracting the cargo agent and this in turn the airline, so much so that on 04/04/22 the final client Tabacal Free Zone NV confirmed, by email, the availability of a cargo plane and in successive mail (attached to the Public Ministry on July 8, 2022), ratified the payment and the date of the flight. 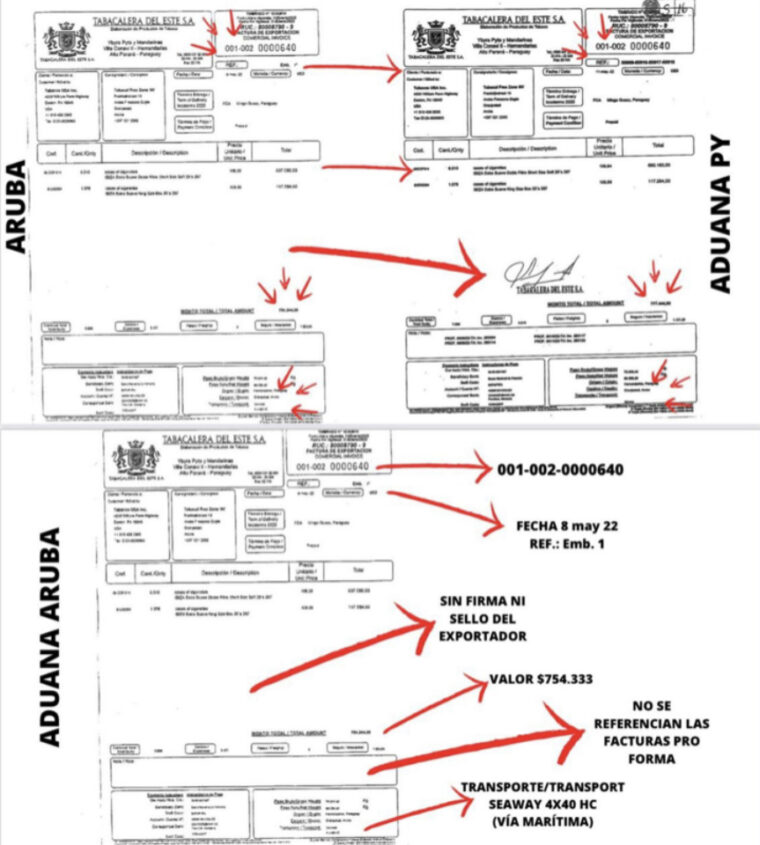 These are the two invoices presented by the government authorities as “cloned”. However, the only invoice that is valid is the one that records the air freight, since it was the one used to make the transfers. The one that said that the cargo would be transported by sea was rectified by Tabesa at the request of the buyer when they reported that they found an air freight service.

As the proforma was with the Incoterms CIF Oranjestad/Aruba (by sea), with the change requested to FCA (Free Carrier or Free Carrier) by air, a credit was generated in favor of the client for the value of the sea freight.

This is when the rectification of invoice No. 640 is made, which had been initially sent by mail when the cargo would go by sea.

Tabesa also sent to the Public Ministry the detail of the swifs charged for all of the aforementioned proformas plus the one corresponding to proforma 005/22-TA, these include air shipments as well as other shipments made by sea. The total value of what was collected corresponds exactly to the total value invoiced in the proformas. 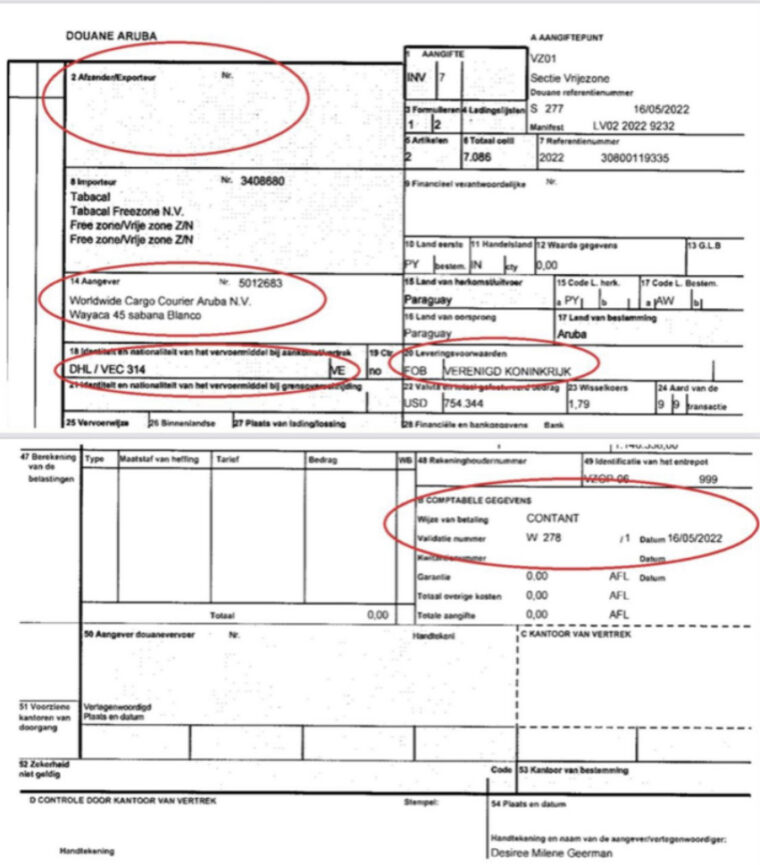 ABOUT THE ALLEGED DIFFERENCE OF US$ 400 THOUSAND

“Four bank transfers were made in this operation, with amounts other than the sum of these amounts, resulting in a total of specifically US$ 1,202,045,” Federico Hetter, Anti-Corruption Minister, had declared.

These affirmations confirm, on the one hand, the lack of knowledge of the operations carried out or the bad faith on the part of the government against the Paraguayan company. In fact, since March, April and May, not only US$1,202,045 was received, as Minister Hetter erroneously says, but US$1,975,378 for different payments for other cargoes that were carried by sea, while the payment made for the cargo sent by air, exactly what was received on the invoice was 640 US$ 777,444.

The authorities that held the press conference last Friday could have avoided this embarrassment if they requested the corresponding report from the BNF or if they resorted to the source, that is, Tabacalera del Este SA 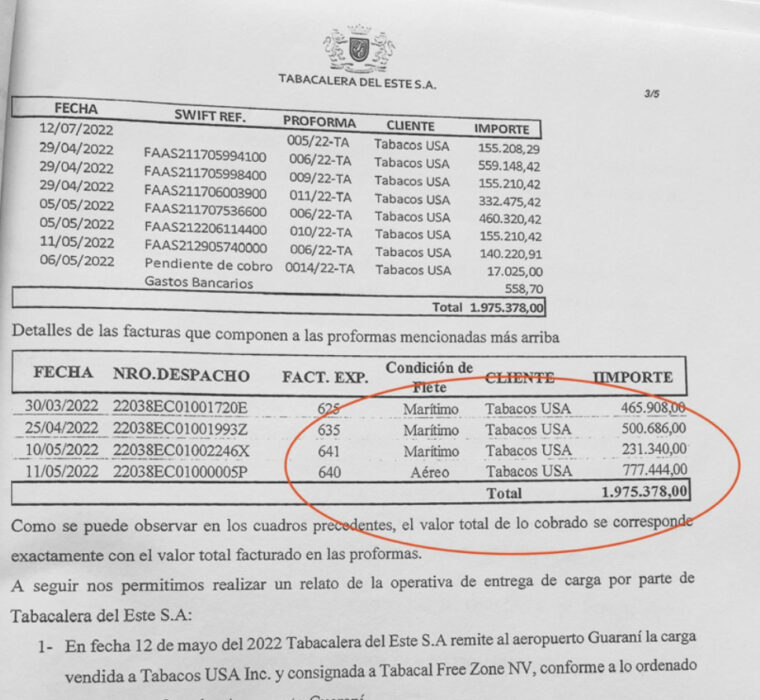 This is the summary of the transfers that Tabesa received from its client Tabacos Usa for the sale of cigarettes to the Tabacal company. There are several transfers for different shipments that were maritime and air, but from the government they want to confuse by saying that the transfers were greater than that stated in the invoice for the air shipment.

THERE WAS NO CASH PAYMENT

Another of the lies presented by the government authorities is that payments for the sale of cigarettes to Aruba were allegedly made in cash. In the dispatch sheet for the entry of the product to Aruba that the authorities exhibited in one part it reads (Contant) which in the translation is (cash) but it refers not to the payment in cash for the merchandise, but for the dispatch taxes that In this case absolutely nothing was paid because it was operated in a free zone. 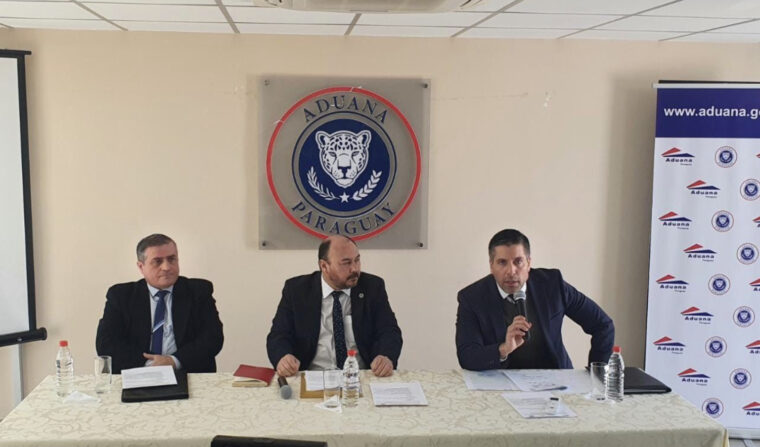 This is another confirmation of the ignorance or bad faith of the Seprelad minister, René Fernández, who insisted that the payments were made in cash.

Factoring: six aspects to take advantage of this financing tool

Dora María Téllez, on a hunger strike in prison, demands an end to isolation

They confirm payment of G. 400 million in express kidnapping, they point to marijuana users

Deputy Commissioner Mario Vallejos, head of the Anti-Kidnapping Department of the National Police, reported that the

“We will comply with the agreements established in the Concertación”, says Patria Querida