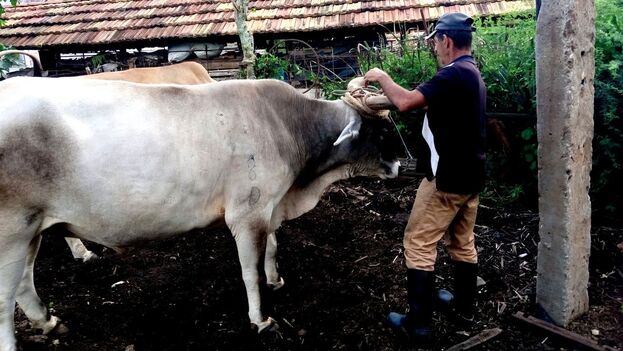 An injection of painkillers and the silence of the early morning have become the key to stealing a pig in Cuba. The thieves study the place well. They are usually neighbors or inhabitants of nearby towns. They arrive with a cart, a truck or some type of transport where the animal fits. They are characterized by precision and silence.

Many years of vandalism and looting have prepared the peasant for incidents like this. Now that the pens are closer to the houses, any noise could give away the criminals. However, the method has become increasingly sophisticated.

A couple of peasants, dedicated to fattening pigs in Placetas, recently suffered an attempted robbery using the sedative technique. The pig, a nervous animal, begins to growl at the threat of death, and its screams wake up the neighborhood. To avoid this, the thief discreetly inserts the needle of a syringe into his skin and thus manages to numb him. So they can charge it without the slightest resistance or noise.

“I used to listen to the peasants talking about robberies but, honestly, I never thought it would happen to me,” says Idalberto, a farmer from Placetas.

Syringe or not, luck can play tricks on the criminal and favor the peasant. In this case, the couple detected the thieves and were able to stop the robbery in time. The thieves scrambled out, leaving the loot behind.

Placetas, Camajuaní and Santa Clara – important economic centers of Villa Clara – form a triangle around the Minerva dam, a reservoir that fertilizes the region. It is an extensive valley not far from the Escambray, where tobacco and minor crops grow well, and the peasants are usually descended from Canarian emigrants.

Within that perimeter there are several peasant towns (Miller, Manajanabo, Falcón, La Sabana, Central Fe, Carmita, Vega Alta, La Quinta, Taguayabón and many others), some on the edge of old sugar mills and others, related foundations. with the rivers and the tobacco plantations.

The quality of life in these villages is precarious, but it used to be more peaceful. Now, the farmer’s day passes between hard work under the sun, government obstacles to marketing their crops and increasingly frequent rumors of theft and vandalism.

“I used to listen to the peasants talking about robberies but, honestly, I never thought it would happen to me,” says Idalberto, a farmer from Placetas who, in addition to planting malangas, raises chickens, goats and cows on his farm.

Idalberto’s daily routine is that of any field worker. She gets up at 6 in the morning, strains the indispensable coffee and prepares her horse to reach his farm, a kilometer away from the house. A few months ago he discovered in the vicinity of his land the traces of some cart tires and that the fence wires had been cut: his oxen had been stolen.

He discovered in the vicinity of his land the trace of some cart tires and that the fence wires had been cut: his oxen had been stolen

“At that moment, heaven and earth joined me,” laments Idalberto. The crime occurred on the morning of May 16 and the man wasted no time before reporting it to the Police. At two in the afternoon the Operative Guard appeared at the farm.

“They took photos of the place,” recalls Idalberto, “they walked around a bit and then left.” With much reluctance, they asked him if he knew or suspected anyone who “might have done him harm.” The peasant did not know anything else until May 25, when the sector chief called him for a summons. There they gave him the “tirilla”, a document that accredits the removal of his animals from the livestock registry. With that paper he didn’t recover the oxen, but it was a safe-conduct, in theory, so as not to have problems with the agricultural bureaucracy. There was the matter.

It was not, of course, the only case of cattle theft. The Police have received numerous reports, but the investigation has been carried out with the same disinterest on the part of the officers.

At the beginning of this year, a farmer from Sancti Spíritus described for 14ymedio inaction on the part of the authorities against this type of crime. “The police came and did not take fingerprints, they did not do their job well,” the man denounced. “The only thing they did was ask if we heard something, if we suspected someone; they work with the information that you give them, not with what they can look for.”

For the thief, the most viable thing is to steal small animals, such as chickens or piglets. Theft of pigs takes care and involves more people, while killing an ox or a cow is the most risky, because in addition to the possibility of being discovered, the animal is not as easy to hide as a chicken or a pig. If no transport was used, it is logical to assume that the thief belongs to the environment where the theft occurred. To get away from the place with the prey, it is common to mount the animal in a horse cart or in its two-wheeled variant, the steering wheel .

The inaction of the Police has led the peasants to take their own protection measures. Some have a machete at their fingertips – a rural weapon par excellence – and may even have an old shotgun, not very functional for “real” confrontations but quite useful for symbolically gaining respect in the community.

Some have within reach of a machete or an old shotgun, not very functional for “real” confrontations but quite useful to gain respect.

The area’s agricultural bureaucracy has taken only one measure: a few months ago they called a meeting of the National Association of Small Farmers. There, the peasants received the “order” to make guards to watch their plots and farms. In this way, they have become the only ones responsible for the robberies that occur on their land. The guards, in addition, represent extra time in a working day that is already quite hard.

The insecurity of the countryside is not exclusive to the Placetas-Camajuaní-Santa Clara perimeter. It is not even restricted to the rural environment. In the outskirts of the city and even in urban pens, the theft of pigs and other farm animals is a common reality.

14ymedio has received another testimony, from San Antonio de los Baños, where a couple regrets the theft of cattle. “So far this year they have taken us four cows, plus two bulls that disappeared from the corral of a relative of ours,” they say. “They kill the animals on the spot, to take the meat. They took the calf from one of our cows, which was giving birth, leaving only the bones and the viscera.”

As in the rest of the cases, the Police are useless to investigate the crime. “When the robbery came, two officers came. The only thing they told us was to remove the cows from the agricultural registry,” says the couple. “Oh, and be careful with protesting or going out with a sign to the church park: they disappear just like animals.”

Given the inaction of the Police, thieves have carte blanche to steal animals in the Cuban countryside

An injection of painkillers and the silence of the early

Mexico is a privileged country in terms of irradiation conditions

The Brazilian intelligence agency Abin confirmed that it was his

You want to change your fund in your AFP, but

They won’t hit the lead

I like old weapons, the rifles that rest quietly on the wall, the saber that has

Eloy Domínguez, 45, is the new auxiliary bishop of Havana

Mexico returns 47 migrants to Cuba and adds 1,410 so far this year

(EFE).- The Government of Mexico repatriated to Cuba this Friday a group of 47 undocumented migrants

(EFE).- Cuba and Mexico closed a bilateral business forum this Friday in Havana with the signing

José Ramón Balaguer dies, a "fireproof" and faithful official of the Cuban regime