Due to the increase in cases of coronavirusthe country entered the fourth wave a few weeks ago, about which the Minister of Health of the City, Fernán Quirós, gave details about it.

The minister pointed out that the end of the fourth wave of covid-19could be close, since according to their criteria and the epidemiological behavior of the coronavirusthere are “a couple of weeks” left of the growth peak.

This means that in the coming weeks, we will again see a decrease in infections of coronavirusafter spending five weeks with a significant increase in cases.

“In the City we have already been five weeks, and for a week the cases have not increased. So it is very likely that in the coming weeks we will already begin the descent” pointed out Quirós who also emphasized vaccination.

“You have to maintain vaccination and keep the mask in closed or poorly ventilated places,” said the minister, so while the peak of infections is overcome, it is essential to reinforce care, especially inoculation.

“The reinforcement of the vaccine is important, it is not enough with the first two doses” indicated the doctor, who also advanced that, although for now it cannot be defined if more doses will be applied in the future, it is expected that the fourth dose will be the last one administered this year.

How is the application of booster doses in the country.

For several months, the country began to administer the fourth dose of the vaccine against covid-19, or second booster. The process began with the population at risk and those over 50 years of age and has now been extended to all those over 18 years of age. 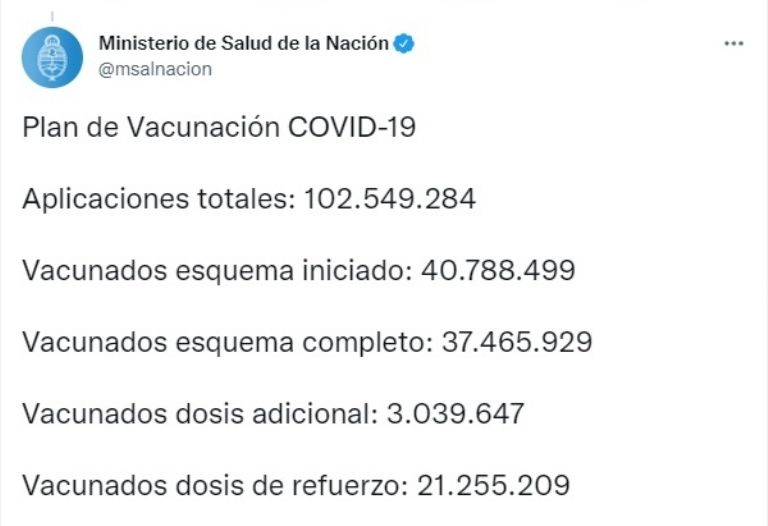 According to the latest report from the Ministry of Health, until May 28, 102,549,284 vaccines had been administered, of which 21,255,209 correspond to reinforcements; that is, half of the vaccinated population has not yet received the third and fourth doses.

They issue an arrest warrant against the actor Jerónimo Gil

The 39th control court of the Caracas Metropolitan Area agreed

Fire in a paper bin in the municipality of Quilmes

A paper mill, located at kilometer 14.5 of Camino General

Petrobras received a letter from the Ministry of Mines and

Beethoven Herrera, appointed to the board of directors of La Previsora

The economist, professor and columnist for Portafolio, Beethoven Herrera Valencia,

Fire in a paper bin in the municipality of Quilmes

Two deposits of a paper mill in Quilmes catch fire

Photo: Street View Capture The deposit of a paper mill in Quilmes, located on Camino General

Moreau: D’Alessandro’s license "tastes little" given the "enormous gravity of the facts"

Moreau: “Either the chats were fake and they made them up, or they hacked them and

Gabriela Mayer: "Journalism and literature are like banks of the same river"

The author uses autobiographical events or characters as support for her strange stories. / Photo: Paola