On Tuesday, April 25, the Investigative Commission with the task of investigating the irregular licenses to members of the National Federation of Secondary Education Teachers (FENAPES) by the Secondary Education Council in the period 2015-2019 considered, by majority, that there were “omissions and conduct with criminal appearance” by former high school authorities and union leaders. For their part, FA legislators understand that a “political circus” was set up.

In the last hours, FENAPES held a press conference to refer to the majority statement of the parliamentary investigator.

The teachers’ union denounced an “operation mounted by some operators under the guise of an investigation”, and announced that the issue will be taken to its final consequences even at the international level.

“Obviously and openly, the Uruguayan government has embarked on criminalizing social protest and, in particular, has focused its persecutory policies against unions. Under the discourse of freedom, the authorities unleashed a fierce campaign of stigmatization and discredit first against a group of teachers from San José for taking a photo. Not satisfied with this, the attacks continued and now different names of teachers have been spread in public ‘escrache’ mode as a grotesque lynching attempt that destroys all the guarantees of due process”, denounced FENAPES.

Olivera said that “some actors set up a court within the Parliamentary Investigative Commission, something that violates the principle of separation of powers and the specific powers of the Prosecutor’s Office and the Judiciary.”

The union leader denounced that the Investigator acted “against the law and was “illegitimate, since it violates labor agreements of the International Labor Organization.”

Olivera added that FENAPES “will expand the complaint before the Committee on Freedom of Association based on the illegal actions of the Commission.”

“It is very serious that a Parliament to which the Constitution grants the responsibility of creating instruments that promote union activity is at the forefront of a process of anti-union persecution, criminalization and political persecution,” he denounced. 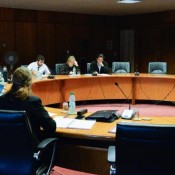 This afternoon the reading of the sentence to the former

The hotels of the northern beaches they expect the occupation

Users denounce failures in the Digitel service throughout the country

This morning’s seizure totals more than 1,400 packages of cocaine