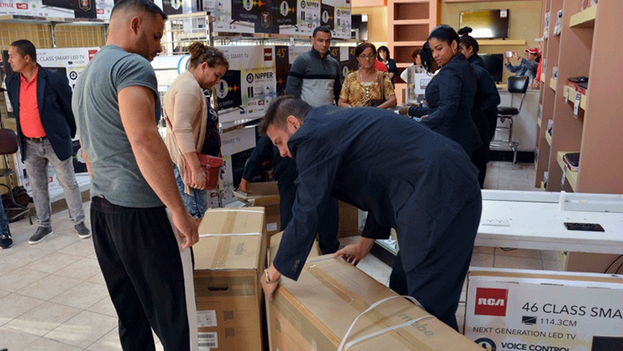 “Soundless and efficient,” says the text that accompanies the photo of a power generation plant that, for about $4,000, promises to exorcise the demon of blackouts. The most prized status symbol on the Island is a device that keeps appliances running when power goes out. Only surpassed by a plane ticket to emigrate.

The energy deficit, due to the poor condition of the thermoelectric plants and the lack of fuel, has plunged Cubans into darkness. In large areas of the country, electricity only appears in a few moments, which, added together, do not exceed ten hours of service per day. Cooking, cooling down or being able to drink a glass of cold water depend on running devices that invariably need energy.

Since last August 15 and with the entry into force of new customs flexibility, Cubans can import non-commercially up to two power plants with a maximum power of 15,000 watts. The fee payment may vary depending on the capacity of the device and whether the traveler brings other merchandise that is also taxed, but that small gap has been enough to trigger the market for generators.

Ibrahim has been traveling to Panama for six years to import appliances. “The pandemic almost put me out of business because I had a good time without being able to go out, but I’m back on track,” he tells 14ymedio. “The most profitable thing right now is to bring power plants because people are desperate and pay them well. If you don’t have a plant you don’t have quality of life.”

“The pandemic almost put me out of business because I spent a long time without being able to go out, but I’m back on track”

Those who do not have the resources to buy one, appeal to ingenuity: fan blades that move powered by the pedaling of a bicycle, improvised beds in the portal or the terrace of the house to take advantage of even the smallest breeze in the early mornings. and the traditional fan that serves to cool the skin and ward off mosquitoes are some of these palliatives, but they barely calm the discomfort a little.

Resident in the Havana neighborhood of Nuevo Vedado, Ibrahim’s clientele are middle-income people, often with family abroad who can help them with their expenses and who do not want to go through the blackout without being able to turn on at least one fan, a pot rice cooker or a television. “I haven’t left Cuba yet and I already have six orders for power plants.”

“The ones in greatest demand right now are those that use both gasoline and propane, because it cannot be guaranteed that one of the two can always be bought. Diesel ones also have their market,” he explains to this newspaper. “The problem is that now it has also become a problem to get the fuel, so buying the device does not end the problems,” he admits.

Among Ibrahim’s clients there are families seeking to alleviate domestic life during power cuts, but also some entrepreneurs. “I have people who can’t afford to lose power because valuable merchandise spoils or they lose a lot of money because they can’t work.” As an example, he puts “some informal shrimp and lobster merchants”, in addition to a home delivery beverage business that sells their products on-line and promises them “always cold”.

The price table is variable, but Ibrahim sums it up: “for each watt that it generates, you pay me a dollar. But if it is a powerful plant with more than 4,500 we can manage and there are discounts that make the watt cheaper. If, in addition, the client wants to take her home, an arrangement is also made”.

But not everything is a matter of money when purchasing one of these teams that save from darkness and heat. “My brother has been insisting that I buy one for some time, but I live on a street where everyone is very gossipy,” laments Juan Carlos, a resident of the city of Alquízar. “If in the middle of a blackout the only house that is illuminated is mine, people are going to start talking.”

“The ones in greatest demand right now are those that use both gasoline and propane, because it cannot be guaranteed that one of the two can always be purchased”

Juan Carlos runs a modest business selling fresh cheese and yogurt. Most of his dealings are informal and he is afraid of being singled out if he manages to keep his light bulbs working when the neighbors are out of sight. “The least serious thing that can happen is envy and the worst is thieves. What are they going to think that I have a lot of money because I have a power plant?”

The theft of these devices is becoming more frequent. “At dawn they took the plant that we had secured behind a padlocked fence,” a neighbor from El Vedado explains to this newspaper that she only managed to use her plant for a few weeks. “It was wonderful if a bit noisy,” she notes. “We never reported it to the police because we had bought it on the black market.”

Ibrahim does not want to import any power plants for his family. “My thing is to make money to get my wife and two children out. If I have to spend that time blowing air out of myself with a piece of cardboard, I do it.” In advance he already knows what devices he will bring to the Island in the first days of September. The classified that he has put in several places shows a large plant, with wheels to be moved and accompanied by a phrase: “sleep all night without worrying about blackouts.”

Every man for himself, blackouts are growing in Cuba and so is the market for electric generators

“Soundless and efficient,” says the text that accompanies the photo

Without a public call and when there are two and

President Laurentino Cortizo announced this Tuesday that, from Monday, August

(EFE).- The specialized teams found more bone remains at the site of the large industrial fire

Spirits burn in Güira de Melena due to power outages, heat and dengue

The residents of the municipality of Güira de Melena, in Artemisa, once again banged pots and

Cuba participates in a Russian military sniper competition in Venezuela

(EFE).- The Minister of Defense of Venezuela, Vladimir Padrino, inaugurated this Monday the “Frontera Sniper” competition,

The Cubans Yaritza Rodríguez Bruzón and Tamara, whose last names are unknown, were identified among the